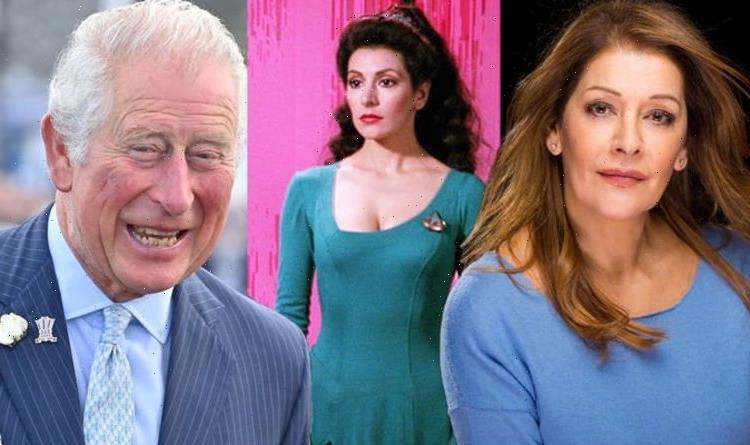 Marina Sirtis, who played the beloved Deanna Troi in Star Trek: The Next Generation (TNG), has opened up about the early days of her 40-year career, as she dished on a moment with Prince Charles which left her “terrified”. The London-born actress revealed she almost “stopped breathing” after the surreal royal encounter.

The 66-year-old thought there had been a mix-up after she received a phone call to be the Prince of Wales’ “official escort” for a movie premiere.

The Deanna Troi actress believed the royal was supposed to invite her Star Trek co-star, Sir Patrick Stewart, instead.

She said: “I was actually Prince Charles’ official escort for the premiere of [Star Trek: TNG’s] movie First Contact.

“It was for the Prince’s Trust and I said, ‘You’ve called Marina, did you mean to call Patrick?'”

But to Marina’s surprise, there was no mistake, as the leading actress escorted Prince Charles to the event.

The self-proclaimed royalist admitted it was a “huge moment” for her.

“I had never been so nervous in my life. I’m from Tottenham for God’s sake,” Marina continued.

“Never in my wildest dreams did I think that I would be sat next to Prince Charles at a premiere of a movie I was in. And he was lovely.”

“But he was very nice and he chatted but he didn’t talk during the movie.”

Star Trek: First Contact premiered in 1996 and the motion picture is the eighth release in the sci-fi film series.

“In the limo on the way to the cinema, my husband [Michael Lamper] kept having to remind me to breathe because I literally would stop breathing,” she explained.

“I’ve never been so nervous in my life. I was terrified. Because I love the Royal Family. I’m a big royalist. This was huge for me.”

Marina gained worldwide acclaim after making her debut as Deanna Troi in the television series Star Trek: The Next Generation and went on to feature in four of the Paramount films.

Marina, who previously resided in the United States, has since returned to the UK after three decades abroad.

The Tottenham Hotspur fan addressed her decision to move back in a candid admission following the death of her husband in 2019.

She explained: “My husband dying had a lot to do with it. We were together for 31 years and married for 27 years. It was just too painful to stay. Too many memories.”

Marina also admitted she wanted to get back to her “tribe” as she cited Donald Trump as another reason to return to the UK.

She explained the former President “did her head in” and claimed he changed the American psyche but “not for the better”.

Marina finished: “Although I had been there for over 30 years, and my cast were fantastic and we’re all best friends, but my best girlfriends were here. I wanted to be back where my heart was.”

The actress explained she is ready to get back to working on film and TV projects and has no plans to retire.

“I’m not going to retire. I love what I do,” Marina concluded.