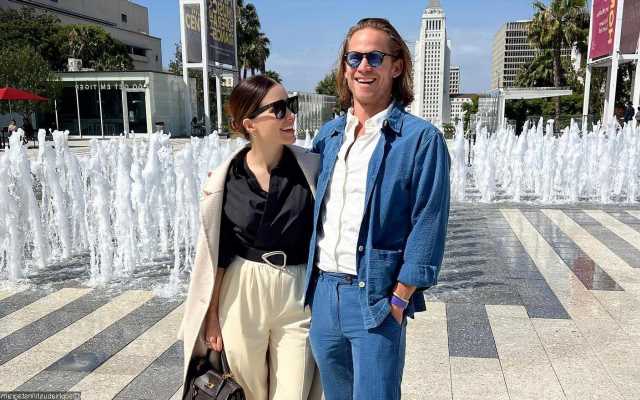 The Brooke Davis depicter on ‘One Tree Hill’, who was briefly married to her former co-star Chad Michael Murray, weds her businessman fiance after in Tusla, Oklahoma.

AceShowbiz –Sophia Bush is now a married woman. According to a new report, the Brooke Davis depicter on “One Tree Hill” has tied the knot with her fiance Grant Hughes nearly one year after nearly one year of engagement.

Revealing the news was PEOPLE. On Monday, June 13, the City County Clerk’s Office informed the publication that the 39-year-old and her fiance exchanged vows in Tulsa, Oklahoma.

The county clerk claimed that a duplicate of the marriage license was issued to the couple on Monday. As for the couple, they have yet to confirm the reports.

Sophia and Grant got engaged in August 2021 after he popped the question during a trip to Lake Como in Italy. When announcing the happy news, the actress took to social media to share a photo when the busninessman was getting down on his knee.

“So it turns out that being your favorite person’s favorite person is the actual best feeling on planet Earth #YES,” she gushed in the caption. “Thank you to @comoclassicboats and @bottega53 for helping my favorite human plan the most incredible, moving surprise of my life. My heart. It bursts.”

Sophia was previously married to her former “One Tree Hill” co-star, Chad Michael Murray, from 2005 to 2006. Due to the brief marriage, the “Chicago P.D.” star admitted she would have to be sure about the “motivation” behind tying the knot again before agreeing to it.

“I think it depends on what people’s motivations are and I want to make sure, whether it’s myself or one of my best friends, that we’re clear on what it is we’re signing up for rather than thinking we’re getting some Kate Hudson and [Matthew McConaughey] rom-com life,” she said when appearing on the “Inside of You” podcast.