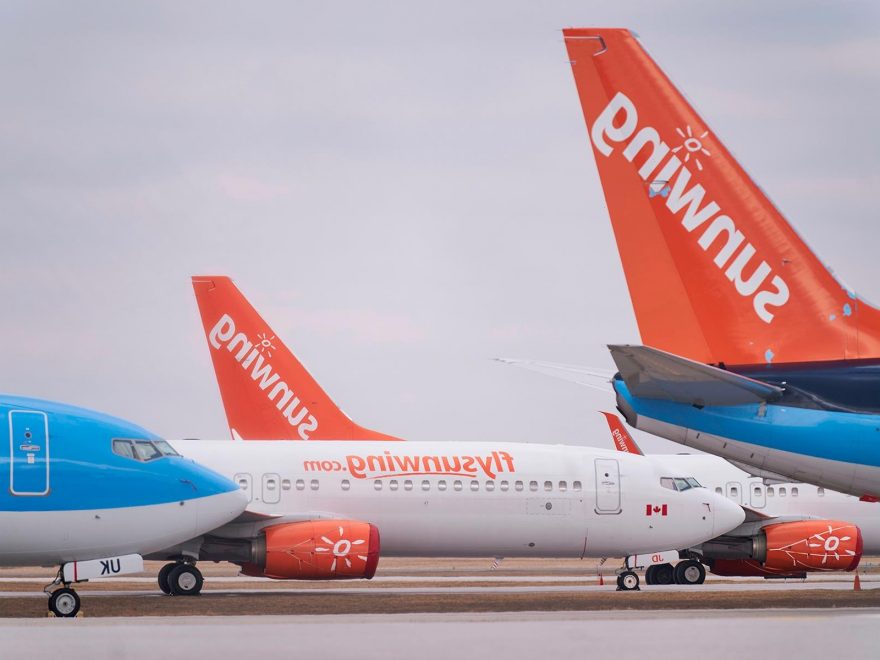 Andreas Eskander is a YouTuber; Jerome Feujio is a boxer on Team Canada; Vanessa Sicotte is studying to be a pilot; and Julian Jalbert works in construction. They don’t know each other, but on Dec. 30 they all met at Pierre Elliott Trudeau Airport in Montreal, Canada, joining a group of just over 130 others for the trip of a lifetime.

The group — a mix of regular folks and a who’s who of influencers and Quebecois reality stars, including several recent contestants from the popular French dating show Occupation Double — were all members of 111 Private Club, an invitation-only social club. That afternoon, they boarded a chartered flight on Sunwing Airlines to Tulum, Mexico where they planned to party in the sunshine and ring in the New Year until their return on Jan. 5.

The United States of Weed

How True Is 'Respect'? Fact-Checking the Aretha Franklin Biopic

“I was really excited,” says Eskander, 23. “Who wouldn’t be? Taking a private plane with your friends, going off to the beach.”

“​​I was DJing on the plane, creating a vibe,” says ATL Jacob, a producer who was part of the trip. “I played house music, and of course Super Gremlin, me & Kodak Black’s song. We number one in the world right now.” He says he thought everyone enjoyed his set, even the flight attendants. “They was vibing and dancing while they serving out drinks and food.”

In Mexico, the 111 Private Club members — led by its founder, James William Awad — explored the Yucatan and the Mayan Riviera, went swimming in a cave, took a boat to Isla Mujeres, and attended the Zamna Festival. “It was open bars and VIP,” says Jalbert, 27. “It was a really fun time.”

“I’ve been to these types of events and they’re always so unorganized,” says Eskander. “I can honestly say this was the most organized. Everything was smooth.”

That came to a sudden halt on Jan. 4, when a video showing the passengers partying on the plane was posted by @od_scoop, a Quebecois Instagram account devoted to gossip about Occupation Double. “It’s a reality show where people travel to win the love of their life,” explains Jalbert. “OD Scoop exposed the people [on the plane] from that show first, and then shit blew up.”

The video shows the aisle of the plane crowded with people, maskless and dancing, mugging for the camera. One woman, her mask under her chin, holds up a fifth of Gray Goose, another, Sicotte, takes a long haul on a vape and lets out a plume of smoke. While lockdown measures were being reinstated across the country, this mile-high party plane was seen brazenly flouting the rules.

The blowback was swift. On Jan. 5 it was the lead story across most Canadian news outlets, with four articles in The Globe & Mail alone. By that evening it had made its way into Jimmy Fallon’s monologue. Prime Minister Justin Trudeau called them “a gang de sans desseins” (which roughly translates as “idiots”) and called their actions a “slap in the face” to everyone who’s following public health restrictions.

“All of this is based off something that started on an Instagram meme,” says Feujio, 24. “It’s just for drama.”

Naturally, those on the plane felt singled out – they had gone through all the pre-screening required, including showing proof of vaccination (as is required on all flights out of Canada). “All of this is based off something that started on an Instagram meme,” says Feujio, 24. “It’s just for drama. ”According to several people on the trip, the flight attendants didn’t ask them to change their behavior during the plane ride. “Although we did hit some turbulence and they advised us to regain our seats and fasten seatbelts — which I have to admit some people didn’t do straight away,” says Sicotte, 27. “There wasn’t any friction,” says Frank Balaguer III, Awad’s manager. “They were selling us alcohol. It was as if it was just a regular private jet.” (Sunwing has not responded to a request for comment about the passenger and crew interaction on the flight.)

On Jan. 5, Sunwing announced that they were canceling the group’s return flight. The airline released a statement saying that this decision was “based on the group’s refusal to accept all terms and our security team’s assessment that non-compliance would be likely based on their previous disruptive onboard behaviour.”

“James didn’t refuse their demands,” says Balaguer. “They cancelled it on their own accord.”

It is a sensitive time in Canada, and across the globe, with Omicron dialing back all too recent freedoms, and the return of curfews and modified lockdowns across the country. People were angry at what appeared to be a gang of entitled influencers gone wild. Sensational headlines added sizzle and the pile on began. Air Canada and Air Transat announced they would deny access to the partiers trying to book return flights. Transport Canada, the country’s governmental authority over airlines, began an investigations, and said that passengers could be fined up to $5,000 per offense.

Online accounts sprang up devoted to tracking the influencers and exposing their identities. No one was more scrutinized than the group’s 28-year-old leader, James Awad, the man behind 111 Private Club. He started the club last July, hosting parties around Montreal. This was the first international trip.

Some of the criticism focused on transgressions in his past: In 2015, he was fined for acting as an investment broker without a license after he “purportedly approached people through his Facebook page, identified himself in the name of KJRVS Inc., and claimed have a unique investment system,” according to Canada’s Financial Markets Authority. (He calls this a mistake he made at 22, adding that he was only made to pay $2,000 CAD.) He changed his name from Kevin to James William Awad in 2019. “James told me he changed his name to be like James Bond,” says Balaguer. “His life is crazy.”

That same year, he started rapping under the name Senior. Last summer, Awad and Balaguer met at Rolling Loud in Miami, and after listening to his music, Balaguer offered to book him at Mr. Jones, a local nightclub. Within a week, Balaguer says, they were talking to Rick Ross: “James told me that when he was younger, he built a video game that made his first million. He told that story to Rick Ross during a live performance at Vendôme. He killed it. The whole club thought he killed it. That gave us the foot in the door to meet up with Rick Ross and have him hop on a feature for Senior.” Footage of that night, including Ross with his entourage, can be seen in clips in the video for the Senior song “Scenes” on YouTube, a shiny, expensively produced clip with almost half a million views. (A representative for Ross confirmed that he did appear on one of Senior’s songs.)

Though he’s still coming up as a rapper, Awad seems to have already amassed a small fortune. Balaguer talks up his friend, noting he lives in a mansion on a hill, looking down over the homes he’s purchased for his friends and family. (He’s purchased 11 properties in the past four years, according to an investigation by the Journal de Montreal, totaling over $17 million.) Balaguer provided to Rolling Stone two videos from his last visit to Awad’s estate north of Montreal, showing a large turreted stone mansion under construction. A limo can be seen bearing the 111 logo. “I am building a castle,” Awad tells Rolling Stone. “I want it to be similar to the Edward Scissorshands movie.” He mentions that his car collection includes a white Lamborghini Aventador SVJ, a Brabus 4×4 squared, and a Rolls Royce Phantom.

ATL Jacob was visiting Awad in Montreal before the flight to Mexico. “His castle crazy man, he got a cave under there with a tunnel,” Jacob says. “I told him he remind me of Batman cuz he gotta put in codes to get into the tunnel. Down the driveway he got four or five houses, he turned one into a studio.”

While Awad seems to have no shortage of funds, most of the people who joined him for the flight to Tulum aren’t able to say the same. For many of them their lives have been turned upside down. While Awad is offering to reimburse all of his guests for expenses incurred by this debacle, there are some things he can’t fix.

Eskander says he received Instagram messages targeting his 10-year-old brother. “People saying how they’re gonna teach him to do things with his mouth,” he says.

“Some girls were crying,” says Balaguer, who has received death threats. “Every single message they’re getting is hate.”

Vanessa Sicotte, the aspiring pilot seen on the video releasing a plume of vape smoke, has become something of the face of the incident. She has since been denounced by the pilot community to the Montreal press and her future as a pilot might be in danger. “I have received at least a thousand (messages), from insults on my character, my family, to death threats,” she tells Rolling Stone in an email from Cancun. “People being happy I’m losing my career and everything I’ve worked for. I’ve received hate from all over the world, in languages I do not speak. The hate is just uncontrollable.”

Two other passengers lost their jobs upon their return. Feujio is worried about his standing with Team Canada. “Boxing is my life. It’s my job. It’s my everything.”

According to Awad, twenty five of his guests are still under quarantine in Mexico. Sicotte and Feujio are back in Montreal. Eskander is in Arizona staying with friends. Julian Jalbert, who says he is fully vaccinated, flew back to Montreal on Saturday night. He says that he and a few others from the group were detained for three hours at the airport before being allowed to go home. Their passports were not suspended. “Transport Canada told us that those in the videos might be more in trouble than us,” he says. “I’m waiting for a phone call with them to talk more about what really happened on the plane. They were really gentle.”

Jalbert intended to return to work at his construction job on Jan. 11. “The police were just at my door to confirm I’m doing quarantine,” he says. The authorities have ordered him to stay home until he receives clear results from his latest PCR test. He’s trying to stay upbeat. He’s not an influencer, a multi-millionaire aspiring rapper, or a reality TV star. He pours concrete, lays foundations, and does it in all but the coldest weather. He needs to get back to work.