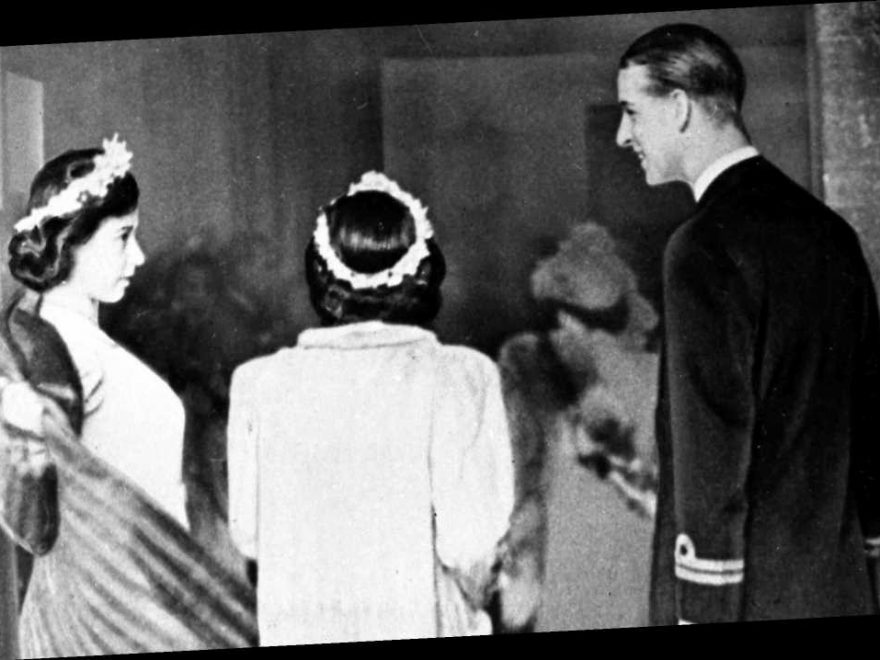 Prince Philip and Queen Elizabeth's love story was legendary; their 73-year-plus marriage was the longest in royal history, and they were each other's biggest champions and supporters. But well before their wedding in November 1947, there were signs the two were destined to be together — which the public saw for the first time at the wedding of their mutual cousin, Lady Patricia Mountbatten, in October 1946.

The two royals (then known as Prince Philip of Greece, 25, and Princess Elizabeth, 20) served in the wedding party at the event, which took place at Romsey Abbey. Philip waited with the other groomsmen at the entrance, while bridesmaids Elizabeth and her sister Margaret (wearing "very attractive full-skirted dresses of pale blue," according to a newsreel) and their parents King George VI and Queen Elizabeth walked in a processional to the door. When the royal family reached the Abbey, Elizabeth removed her fur coat, and locked eyes with a smiling Philip just as a photographer snapped a photo — leading to the iconic image above that caused speculation about their romance. Video from the time (above) shows their sweet and flirtatious manner towards one another.

The speculation would prove to be true; after all, when a 13-year-old Elizabeth met her distant cousin Philip (then 18 and visiting Windsor Castle on leave from the Navy in 1939), she told her father he was "the only man I could ever love," according to the New York Times.

Though her father recommended patience, the two struck up a regular correspondence with each other that was the foundation of their love story. Eventually, Philip accepted a job at an officers' school in England, allowing them to spend more time together and their attraction to grow.

"Patricia Mountbatten said, 'She has such beautiful skin,' " Sally Bedell Smith, author of Elizabeth the Queen: The Life of a Modern Monarch, told PEOPLE in 2015. "And Philip said, 'She's like that all over.' There was a physical attraction!"

Watch Elizabeth & Philip: A Royal Romance – The True Story Behind the Crown on PeopleTV.com or on the PeopleTV app. In order to wed the future Queen, Philip had to become a British citizen and renounce his Greek and Danish titles, taking on the surname Mountbatten from his mother's family. But their marriage, which started out with a spectacular wedding in 1947, was one for the ages. They had four children, traveled extensively and relied on each other in difficult times.

"He has quite simply been my strength and stay all these years," the Queen said in 1997, at a celebration for their golden wedding anniversary. "I owe him a debt greater than he would ever claim."