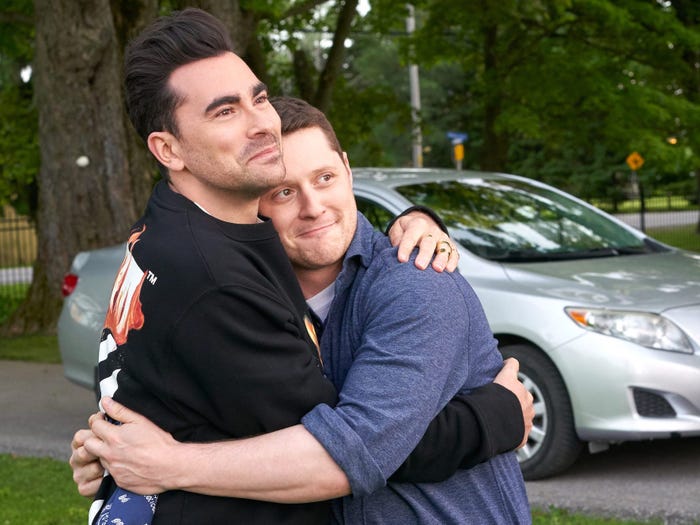 The series finale of "Schitt's Creek" aired on PopTV earlier this year, but fans of the beloved comedy are already clamoring for a cast reunion, preferably on the big screen.

"I don't think there's a single person on our team, cast or crew, that wouldn't want to come back for a movie," the show's cocreator and star, Dan Levy, told People in a recent interview.

The PopTV comedy series followed the Rose family as they went from living as rich New York City socialites to embracing more humble roots in a small town, living out of a motel.

But Levy isn't committing to any sort of time frame for a continuation of the Rose family's story.

"I think the success of the show really was tied so closely to the care that was put into it and the quality that was put into it," Levy said. "If I can come up with an idea that I think builds on what we've already done in a way that feels good and exciting and new and fresh and challenges our actors, then great. I go to sleep willing that idea to come to me."

Levy, who both starred in "Schitt's Creek" and worked as the showrunner behind-the-scenes, made the decision to end his series with a sixth season back in March 2019.

"I understand how quickly the legacy of a show can be tarnished by overextending itself," Levy said during a "Hot Ones" interview when reflecting on the decision. "For me, it was so important that people walk away at the end of our show loving it as much as they did when they started."

There's precedent for a beloved show coming back for a movie. Shortly after the period drama "Downton Abbey" concluded in 2016, creator Julian Fellowes began conceptualizing a story for a follow-up movie. The "Downton Abbey" movie premiered in 2019 to positive reviews.

"It's always good for people to miss you before you come back with something," Levy told People. "So I think we're going to let some time pass. And in that time, hopefully, I'll get a little inkling of desire to start exploring more seriously."

In the meantime, fans continue to celebrate the show's Emmy's sweep and its critically-acclaimed final season. It's one of just 11 shows with a perfect rating on Rotten Tomatoes this year.