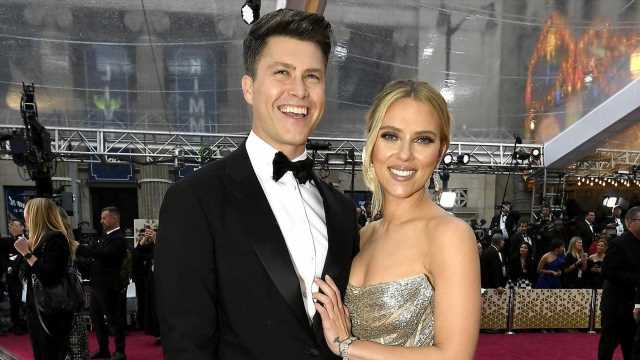 Congratulations to Scarlett Johansson and Colin Jost ! The couple welcomed their first baby together, Johansson’s rep confirmed to People.

This is 36-year-old Johansson’s second child. She shares her 7-year-old daughter, Rose, with her ex-husband, Romain Dauriac, whom she split from in 2017 after two years of marriage.

Jost, 39, and Johansson got engaged in May 2019 after two years of dating. They tied the knot in October 2020 in an intimate ceremony.

Back in February 2017, the Black Widow star talked to ET about the struggles of being a working mother with a hectic schedule.

“I don’t profess to know anything about parenting, anything more than anybody else, [but] being a working mom is an incredible challenge, [and] it’s an incredible gift,” she said. “I think you always feel a little bit of guilt… If you’re at work, you feel like you’re missing out on those special moments with your kid. If you’re with your kid, you feel like you’re not giving enough to your job. It’s a balance.”

“I have a lot of huge admiration for working moms,” she added. “I’m barely, barely holding it together.”

Meanwhile, Johansson recently talked about why she can’t run Black Widow lines with her husband.

“He doesn’t like any spoilers though, so I can’t tell him anything,” she shared during her appearance on SiriusXM’s The Jess Cagle Podcast With Julia Cunningham. “And he doesn’t even pry. Even if I’m telling him.”

Black Widow has been 10 years in the making. Discussions about her character headlining her own movie actually began not long after she joined the MCU in 2010’s Iron Man 2. Studio boss Kevin Feige hinted to Johansson that a Black Widow movie could be in the cards, but things didn’t progress quickly.

“It was such a different environment and even what was going on in the zeitgeist was different,” Johansson told ET when we visited the movie’s U.K. set in August of 2019. “I just think it would’ve been very different because of my own life experience.”

Johansson later spoke to ET about toplining her own solo film and doing so as an executive producer, becoming the first original Avenger to earn that distinction on their standalone project.

“In many ways, my greatest accomplishment on this film was being able to executive produce it and carve this out of nothing,” Johansson said. “We made the movie because we wanted to, not because we had to, which was liberating in a lot of ways. We got to really focus on what we thought was the most important part of Natasha’s story and this is the result.”

Watch the video below for more.