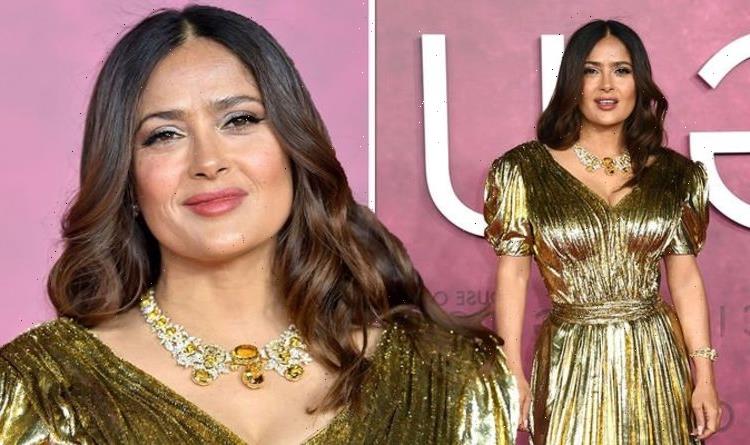 Salma Hayek, 55, stunned on the House of Gucci red carpet this evening as the Hollywood legend donned a gold gown. The beloved actress appears in the star-studded film alongside Lady Gaga, Adam Driver and Jared Leto.

The highly-anticipated film was directed by Ridley Scott and is based on the real-life story of the Gucci family.

Salma stars as Pina Auriemma in the film who is the clairvoyant friend of Patrizia Reggiani (played by Gaga).

Celebrating the release of the film at the end of November, many of the stars were in attendance tonight.

The premiere was held in Leicester Square with Salma turning heads with her stunning ensemble.

She wore an elegant gold gown for the festivities, which cinched in at her waist.

Salma paired the look with a gold necklace and matching bracelet as she channelled a Grecian goddess.

The Hollywood legend completed her red carpet appearance with her dark brown hair curled loosely around her shoulders.

During a recent interview with Vogue, Gaga admitted Salma teased her as a “method actor” on the set.

This was after the singer decided to stay in character as the lead role Reggiani for the film.

The A Star Is Born actress kept in her accent throughout filming and off-screen as well.

Speaking about Salma’s reaction to her, Gaga said: “We were in between takes and Salma was like, ‘Oh, this f***ing method actor is over here.

“‘You know, she’s not talking to me right now.’

“Because I was doing sense memory work next to her, and she was making fun of me while I was sitting there doing it.

“And I didn’t even laugh. When the scene was over, I flipped at her and I said, ‘You’re ridiculous!’ and I started laughing and I kissed her.

“It was a wonderful set, but I’m very serious when I work.”

Gaga also wowed on the red carpet this evening in a statement purple dress.

She paired the look with lace gloves and fishnet stockings as she posed for photographers.

The popstar wore platform heels with the dress as she posed alongside her co-stars.