Saint West, 4, is the best big brother! The four-year-old couldn’t get enough of his little brother, Psalm West, 1, in a new video that the pair’s mom, Kim Kardashian, posted on Nov. 16. In the clip, Saint flashes a huge smile while leaning in to hug Psalm. He also reaches behind the toddler to grab one of his toy trucks to share, which seemed to really impress Kim!

Psalm, who’s obviously still very young, seemed to be more fascinated in the camera than his big brother, but the show of affection was still beyond endearing. When Saint was born, Kim often talked about how jealous his older sister, North West, 7, would get of the family’s newest addition. However, Saint seems to be taking just fine to the big brother role, and can’t get enough of his siblings.

Kim and her husband, Kanye West, are also parents to two-year-old Chicago West. Kim had North and Saint naturally, but suffered extreme complications during both pregnancies. For her third and fourth children, she used surrogates. Although Kim was admittedly nervous that her bond would be different with the babies who she didn’t give birth to herself, her worries quickly went away when Chicago was born. She has since praised the surrogacy process and says she highly recommends it for people who can’t get pregnant on their own. 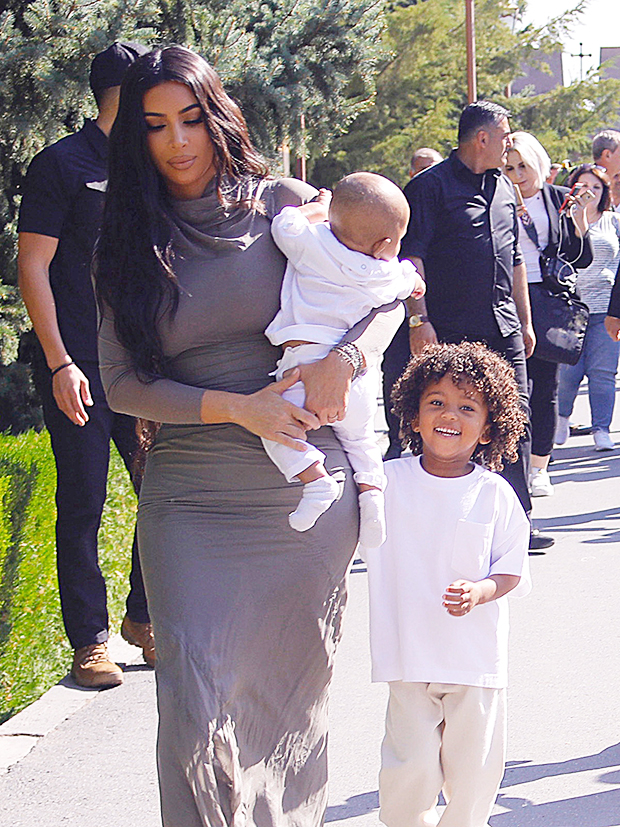 Kim previously revealed that Kanye wants to have “seven kids,” but said she’s done at four. That decision was likely strengthened by the coronavirus quarantine, which was admittedly overwhelming for the reality star. On Keeping Up With the Kardashians, she documented herself trying to care for all four children after Kanye tested positive for COVID-19.

“My kids are driving me crazy!” she said in footage from the show. She even tried to sneak into her bathroom to escape the madness, but her secret sanctuary didn’t last long. However, once Kanye was better and took the kids to Wyoming so Kim could have some alone time, she missed them immensely after less than 24 hours. Nobody said motherhood was easy, right?!