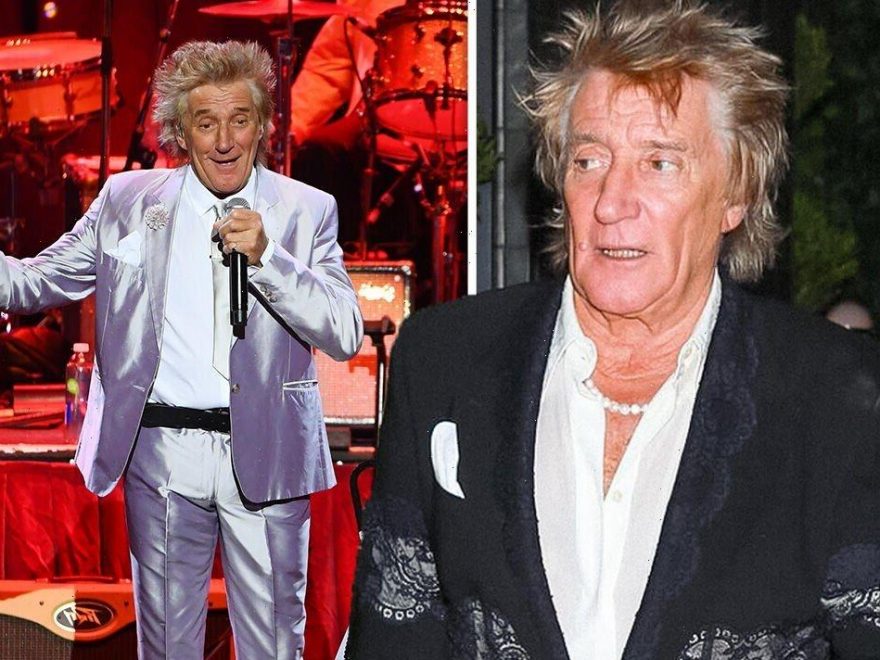 Legendary singer Sir Rod Stewart, 77, is beginning his new UK tour in support of his new album The Tears Of Hercules this month. The star has maintained that, despite his age, there is still “nothing he feels uncomfortable about singing”.

Sir Rod says he will keep singing “sh***ing songs” even as he approaches the end of his seventh decade.

However, the musician has admitted his tours are much tamer now than when he was a young rockstar.

The songwriter is one of the biggest names in the UK, but reflected on how there were times in his career when he questioned whether it was still appropriate to be belting out sexually suggestive songs like Hot Legs.

Hot Legs in particular, which is considered to be one of Sir Rod’s most shamelessly filthy numbers, includes a line that suggests the subject is 17-years-old.

Meanwhile, other lines like “you’re still in school” and “bring your mother too” ensure that this song would definitely not fly today.

Speaking about the lyrics of the saucy song, the singer said: “I went through a brief period of thinking I’m not going to sing Hot Legs because it is a sh***ing song.

“But what do I finish with? Hot Legs. And people love it.

“There is nothing I feel uncomfortable singing,” he added as he prepared for a new string of upcoming performances.

Sir Rod’s new UK tour starts today, with the rocker confessing his gigs are much tamer now than when he was younger.

“It was all sh***ing and drinking, but you can’t carry on like that,” he told the Sunday Times.

“I haven’t joined the pipe-and-slippers club yet, but I have to look after my voice.”

Despite its devise subject matter, Sir Rod is still due to perform Hot Legs during his tour, which kicks off in Nottingham.

Sir Rod has also added four extra concerts at The O2 in London on November 25, P&J Live in Aberdeen on December 2, OVO Hydro in Glasgow on December 3, and Utilta Arena in Birmingham on December 10 due to increased demand.

During an interview with John Pienaar last year, Sir Rod was asked if he felt he could get away with releasing songs like Lost Paraguayos or his smash hit Maggie May now, with the suggestion being that he would simply be “cancelled”.

The song Maggie May centres around a toyboy singing to his older lover, while Lost Paraguayos features what the interviewer described as the singer’s “ridiculously young girlfriend”.

“You couldn’t do those now because you would be cancelled, wouldn’t you?” asked John.

Sir Rod replied: “You know, I think if you listen to the new album there’s two or three songs that are about girlfriends and having sex.

“I mean it’s such a huge part of life. I think what you have to be careful of now is what you say in those songs,” he cautioned in his interview with Times Radio.

“You know, I don’t do Stay With Me or Hot Legs anymore, because they’re not appropriate. They were in the 70s but they’re not anymore.”