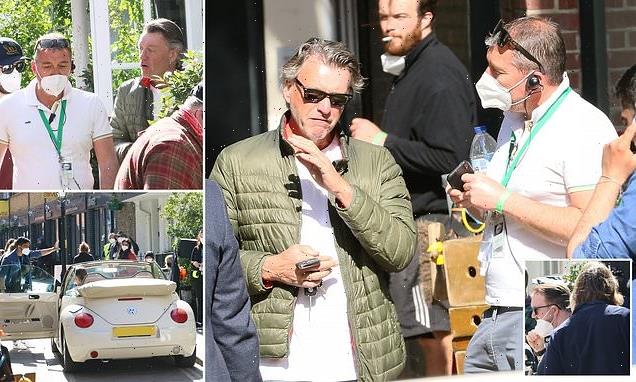 EXCLUSIVE: Trying to get yourself a cameo, Richard? Red-faced Madeley GATECRASHES Ricky Gervais’ After Life set at the pub – when he tries to book a table – but is escorted away by security

Richard Madeley was left red-faced after he gatecrashed Ricky Gervais’ After Life set and was led away by security on Friday.

The TV presenter, 64, was seen turning up at a venue being used to film scenes for the next season of the hit show in his white VW car and trying to get a table.

However, Richard soon discovered that although the al fresco dining spot looked open as several people were milling around outside it was actually closed to the public and filled with crew for the Netflix series. 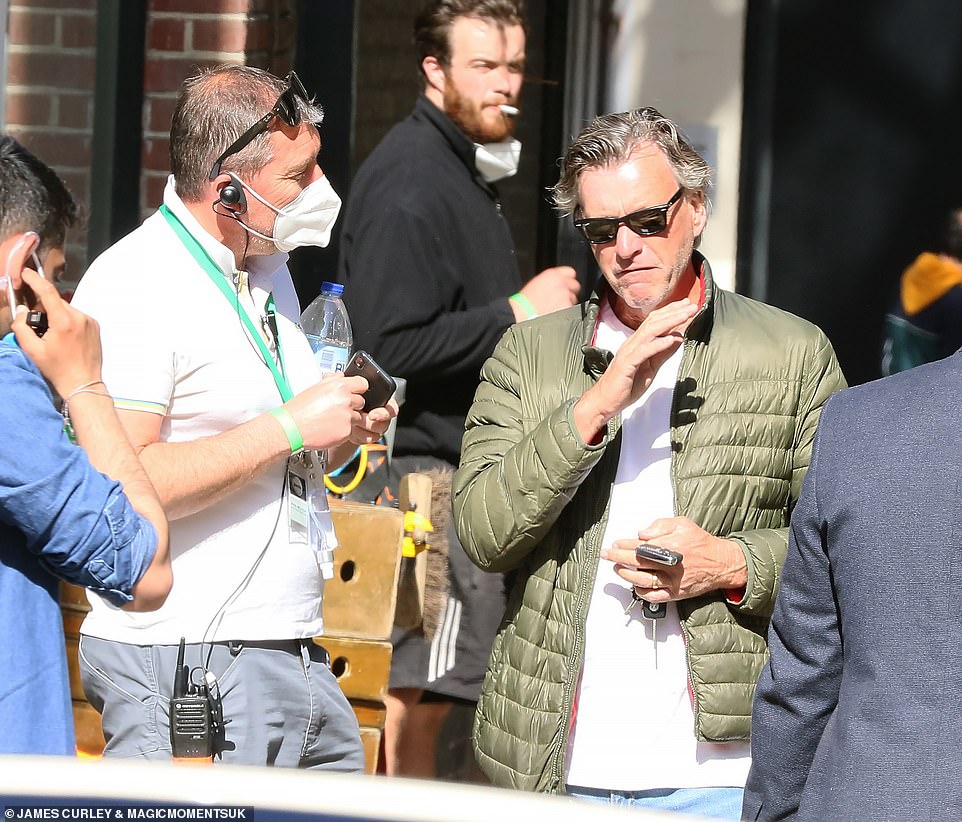 Oh dear! Richard Madeley was left red-faced after he gatecrashed Ricky Gervais’ After Life set and was led away by security on Friday

Pictures taken outside the venue show Richard looking rather unimpressed that he’ll have to change his plans and putting on an animated display as he chatted to crew.

While another image shows the star stepping out of his vehicle while a man wearing a face mask holds out his hand as if to signal that the road and restaurant are closed.

After speaking with several people, Richard seemed to accept his fate and pulled up his green padded jacket as he headed back out in search of another place to grab a meal.

Ricky, 59, was also spotted walking around on set and appeared to pop outside to see what all the fuss was about after Richard’s impromptu appearance. 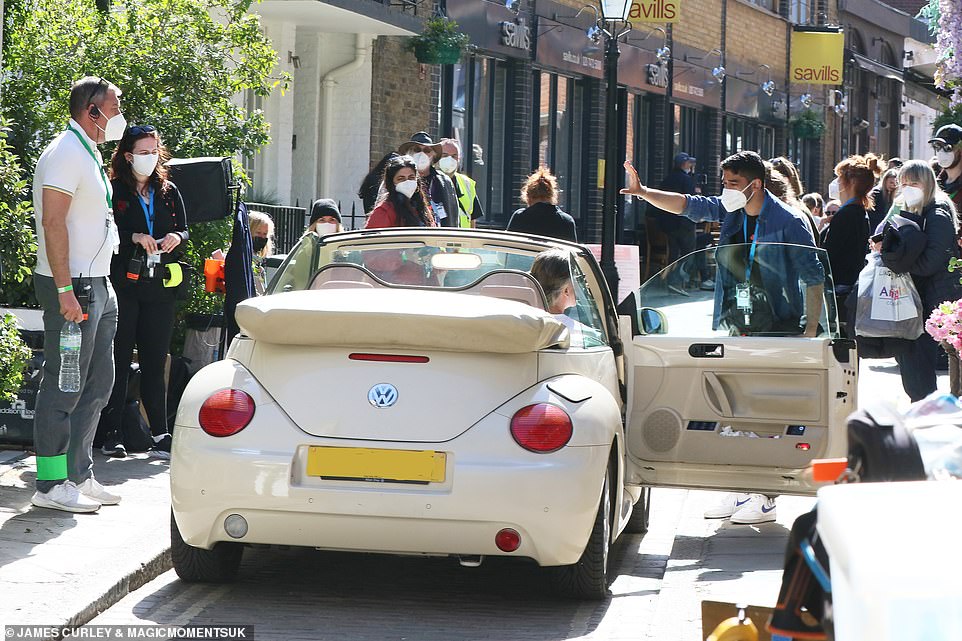 Where do you think you’re going? The TV presenter, 64, was seen turning up at a venue being used to film scenes for the next season of After Life in his white VW car and trying to get a table 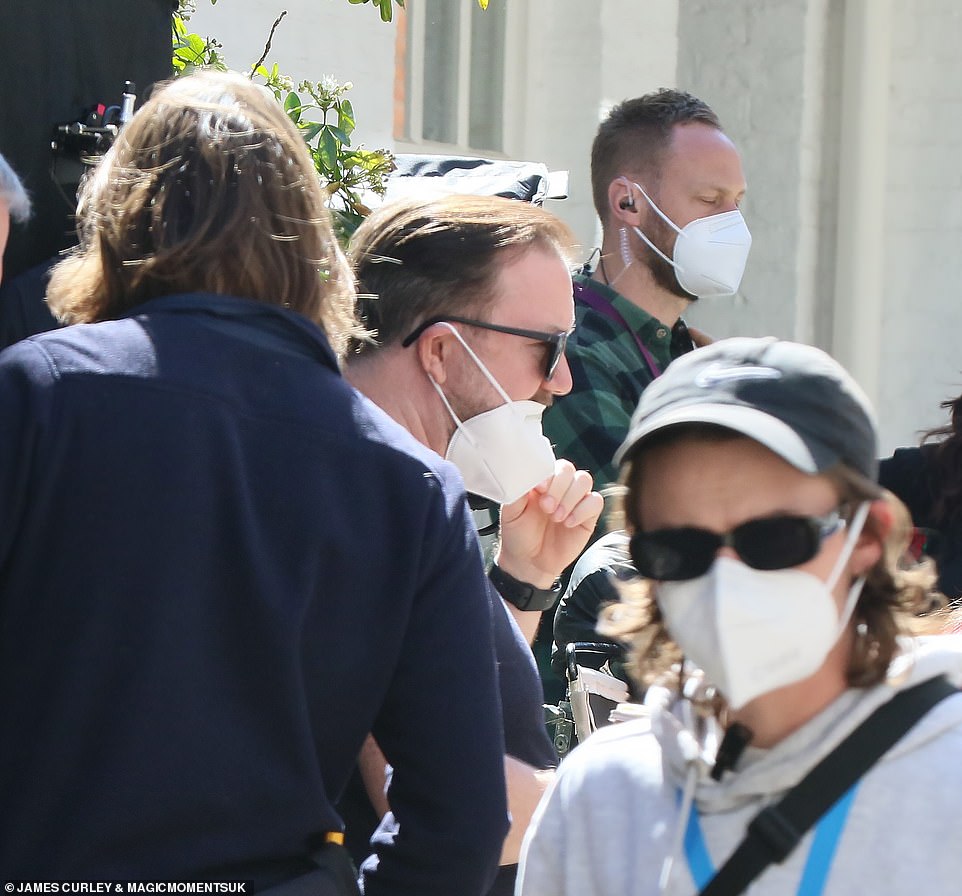 There he is: Comedian Ricky Gervais was also spotted popping outside to see what all the fuss was about

Back in 2006, Richard did make a cameo in one of Ricky’s other hit shows when he appeared on the sitcom Extras which followed out-of-work actor Andy struggling to land jobs.

The presenter played himself alongside other well-known TV hosts including his wife Judy Finnigan, Fern Britton and Phillip Schofield.

Ricky, who stars in and writes After Life, confirmed that filming on season three had started on Monday as he took to Twitter to reveal he was on-set.

While last year, the comedian discussed the difficulties he faced in writing the show amid the roaring success of its second series.

Speaking to Radio Times last year, the star admitted that following his iconic comedies The Office and Extras, he struggled most to bring After Life to life due to the complexities of the story, which follows a widower’s grief. 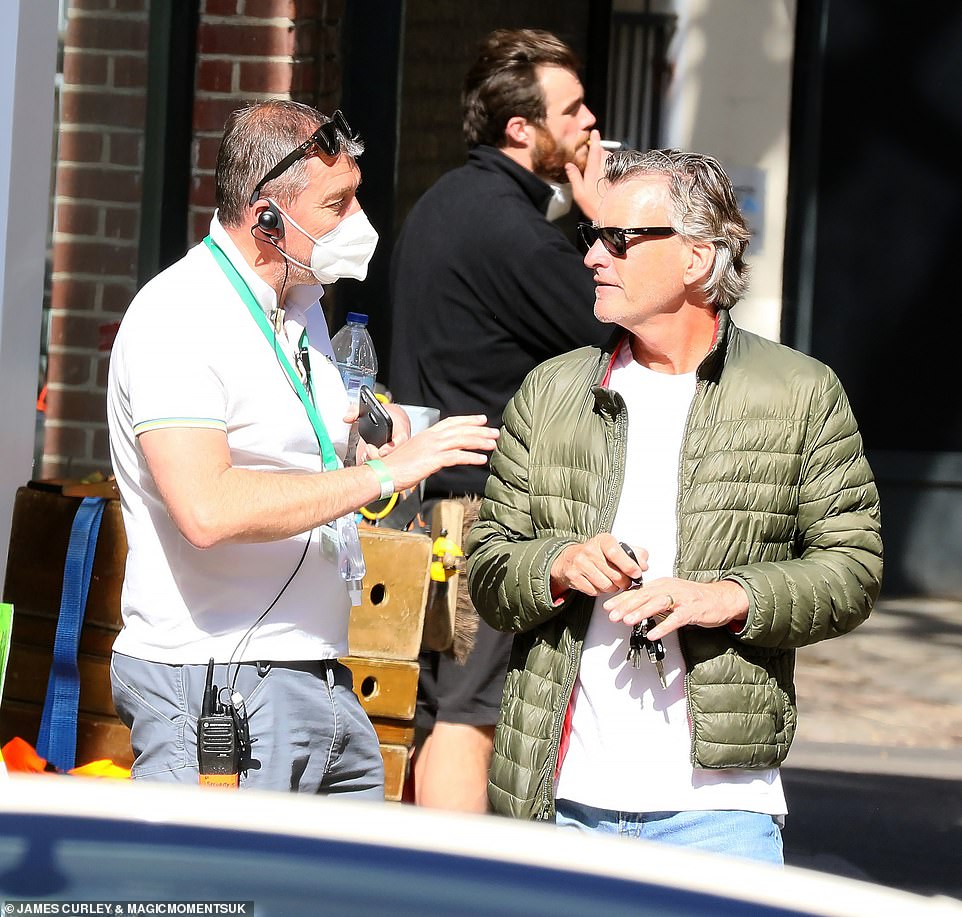 Talking it out: Pictures taken outside the venue show Richard looking rather unimpressed that he’ll have to change his plans and putting on an animated display as he chatted to crew 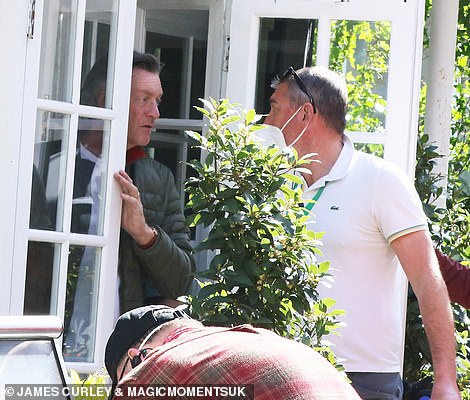 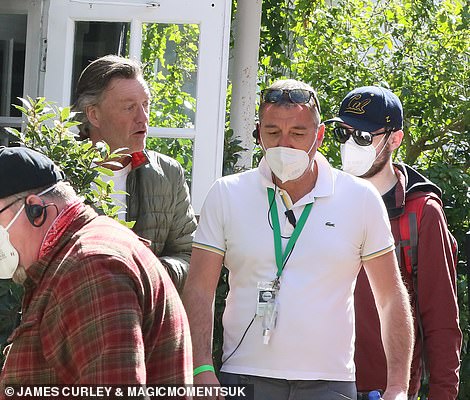 It’s all booked! Richard managed to go inside the building before a man in a white top spoke to him and lead him away 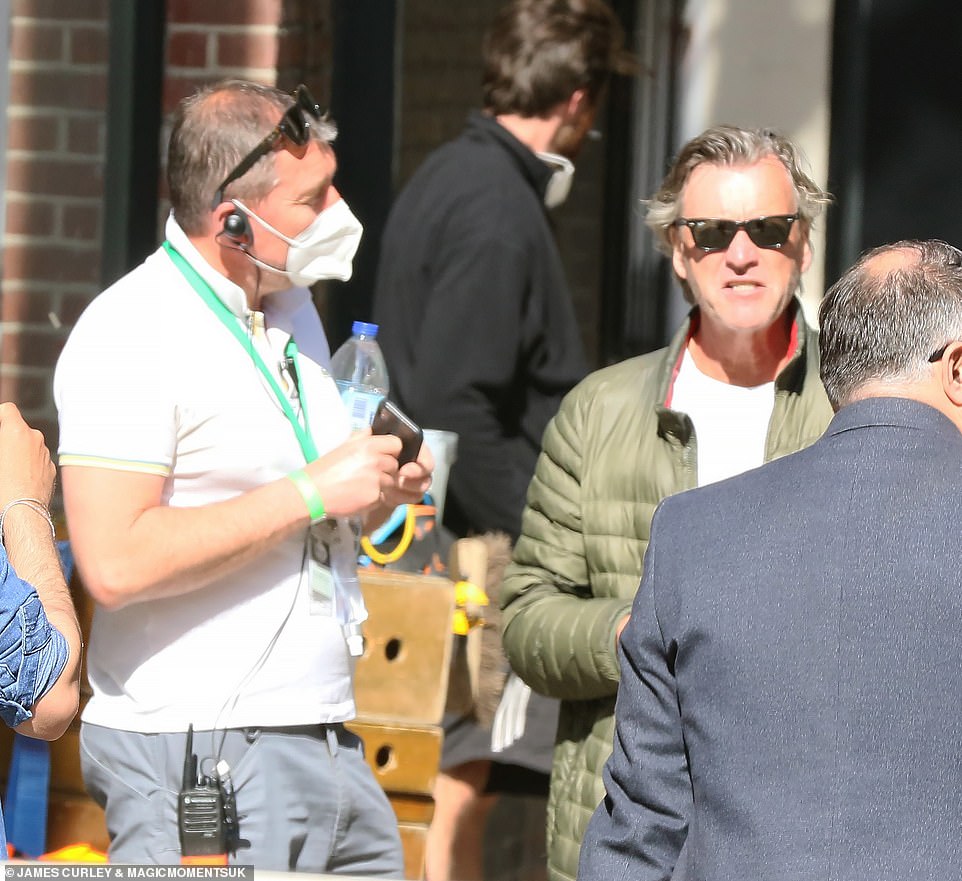 Chatting: He spoke with the man outside while several other members of crew worked around them in the beer garden area

Since its release, After Life fans have been gushing over the second season, which continues to follow the story of grieving Tony – played by Ricky – as he begins to have his spirits lifted by his adoring support network.

While local newspaper journalist Tony is still seen yearning for his late wife Lisa, he begins to perk up and vows to help his loved ones to improve their lives.

Ricky admitted that he struggled most with After Life, as he said: ‘The ‘situation’ bit of it is vast. With The Office, it was a group of people in a place… 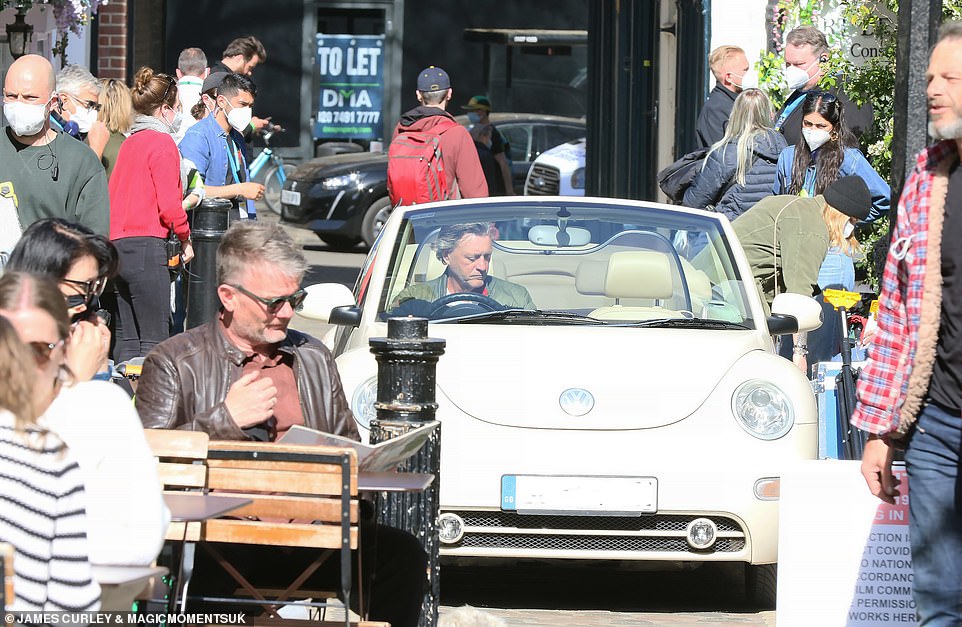 There’s a sign! A small sign did seem to explain that filming was happening at the venue, however the dozens of people sat outside obscured it from view as Richard pulled up in his car 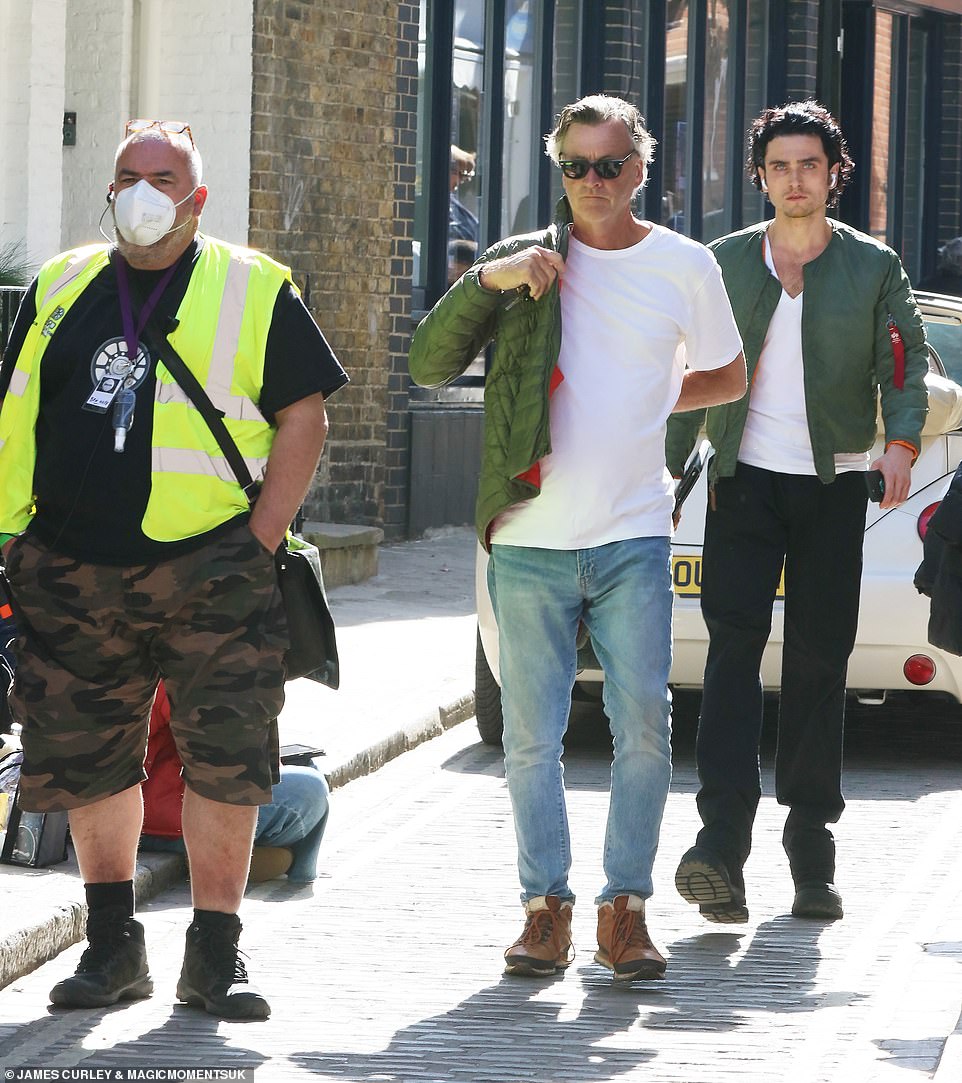 Moving on: After speaking with several people, Richard appeared to accept his fate and pulled up his green padded jacket as he headed back out in search of another place to grab a meal 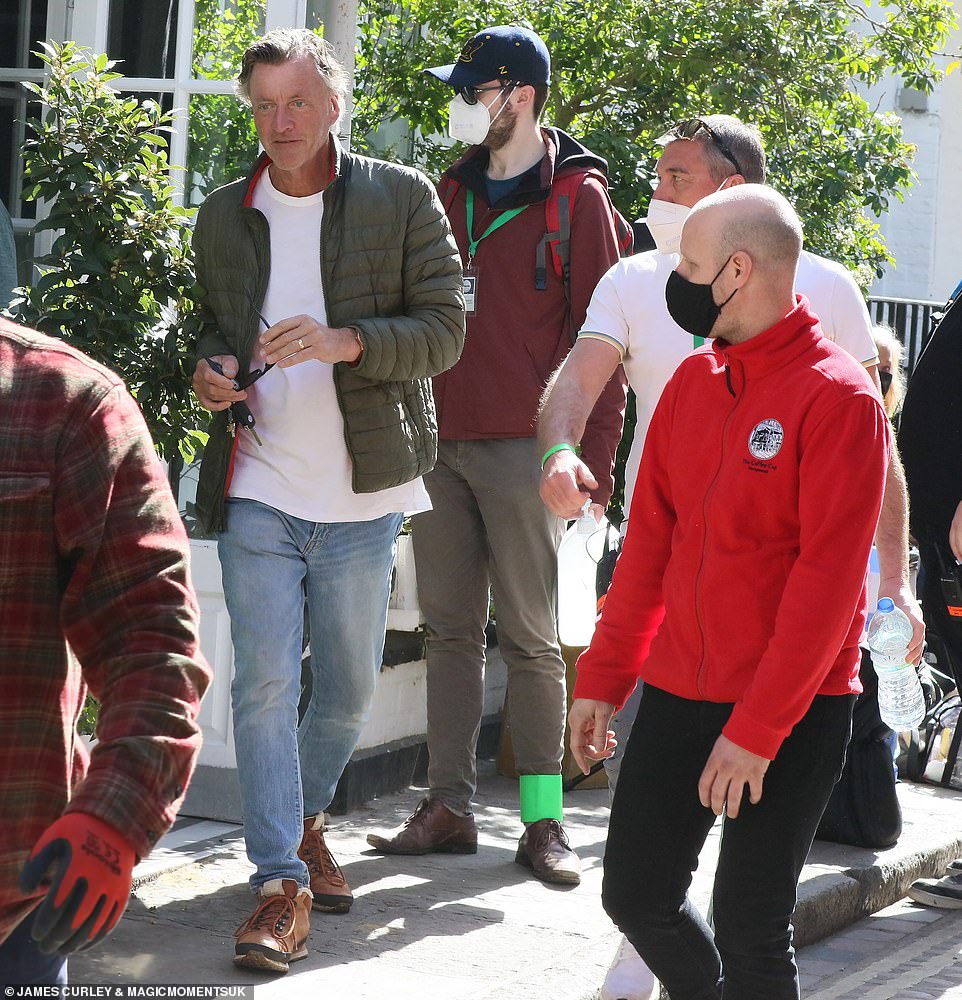 Casual: Richard cut a laid-back figure during the entertaining incident in blue jeans and a white T-shirt over a padded jacket

‘I’d worked in an office for 10 years, I know [that]… and almost the funny thing about The Office was that nothing happens, so that was quite easy… And also Brent was such a strong central character, it was a man who was desperately wanting to be famous and discovered, so once you know that, it’s clear.

‘Extras was hard, because the ambition was bigger. But again, it’s easy to explore the narcism and ego of actors and actresses… So I’d say After Life [is the hardest].’

Richard’s surprise appearance at the filming venue comes after he was tipped to be in the running to replace Piers Morgan on Good Morning Britain.

The broadcaster, who has had several guest stints on the show in the past, will reportedly have a trial run on the panel in June. 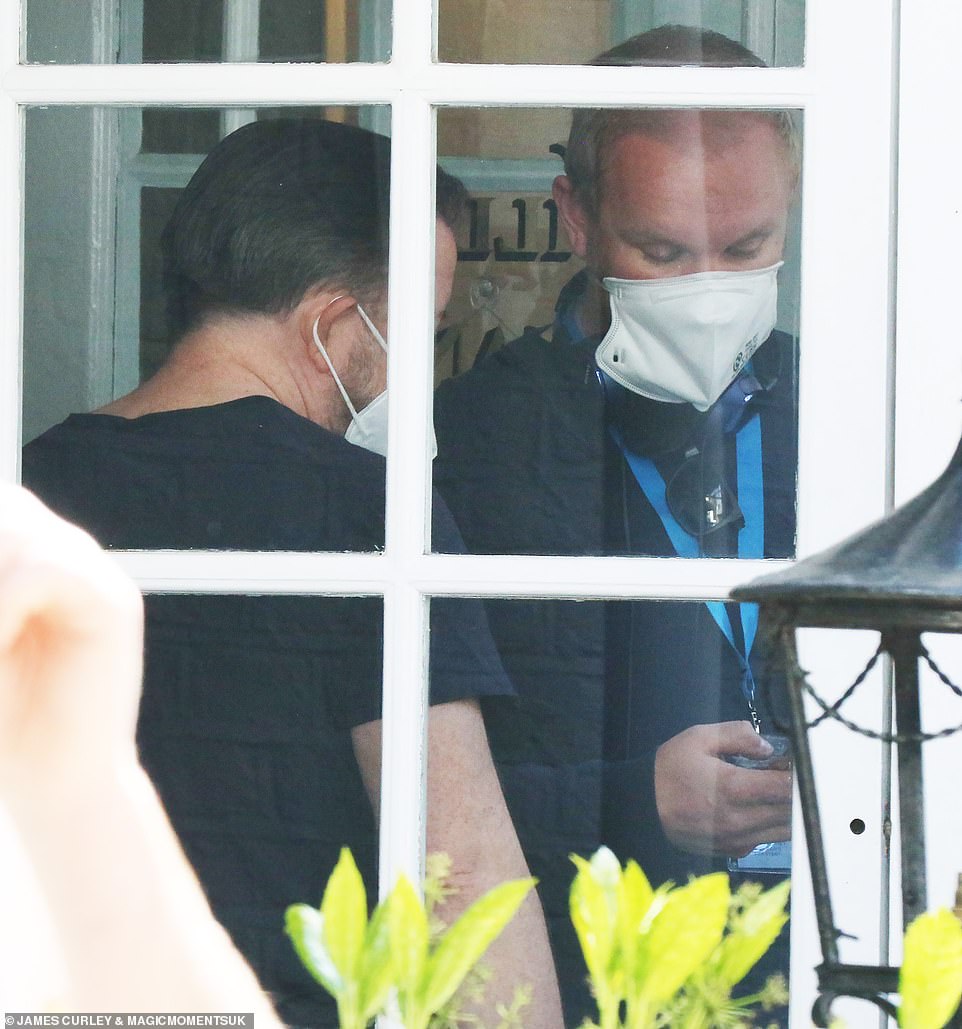 All in a day’s work: Ricky looked every inch the professional as he chatted inside the building amid all the amusing drama 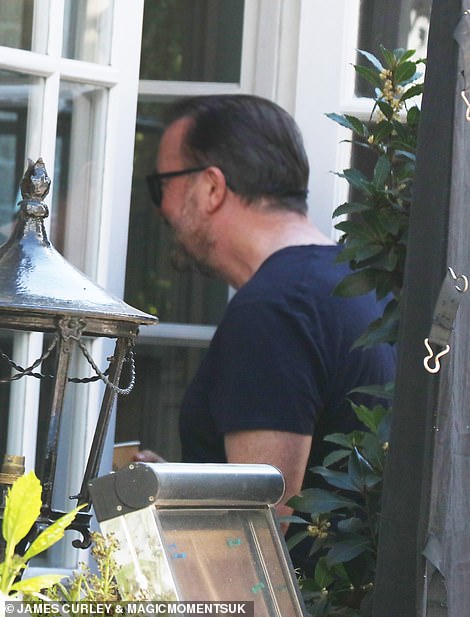 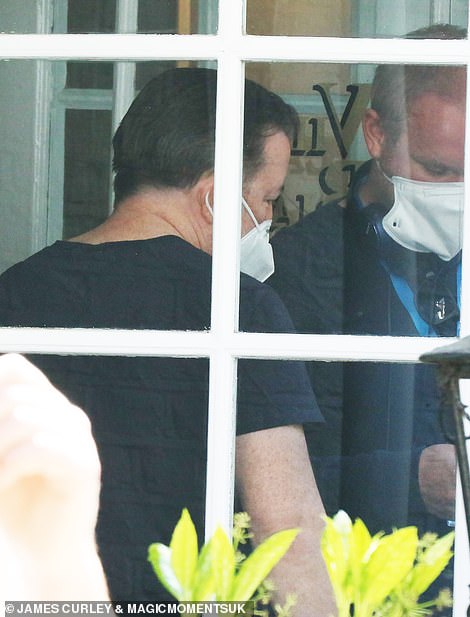 Trying not to laugh? Ricky seemed amused by it all as he stepped back into the pub (right) and popped his mask back on to chat with some crew (left) 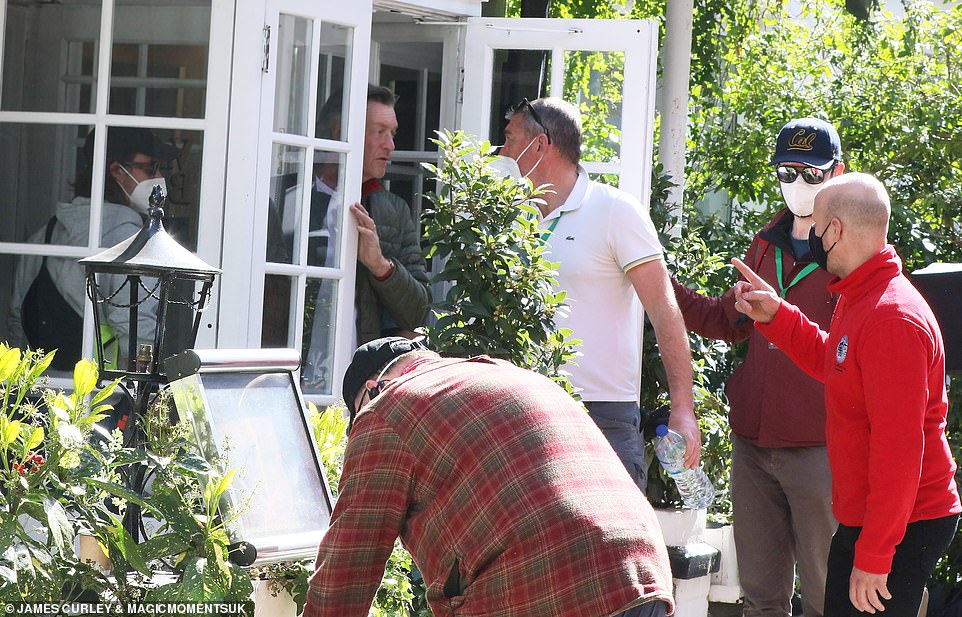 Where are you off too pal? Two men pointed towards Richard as he tried to go inside in search of a table 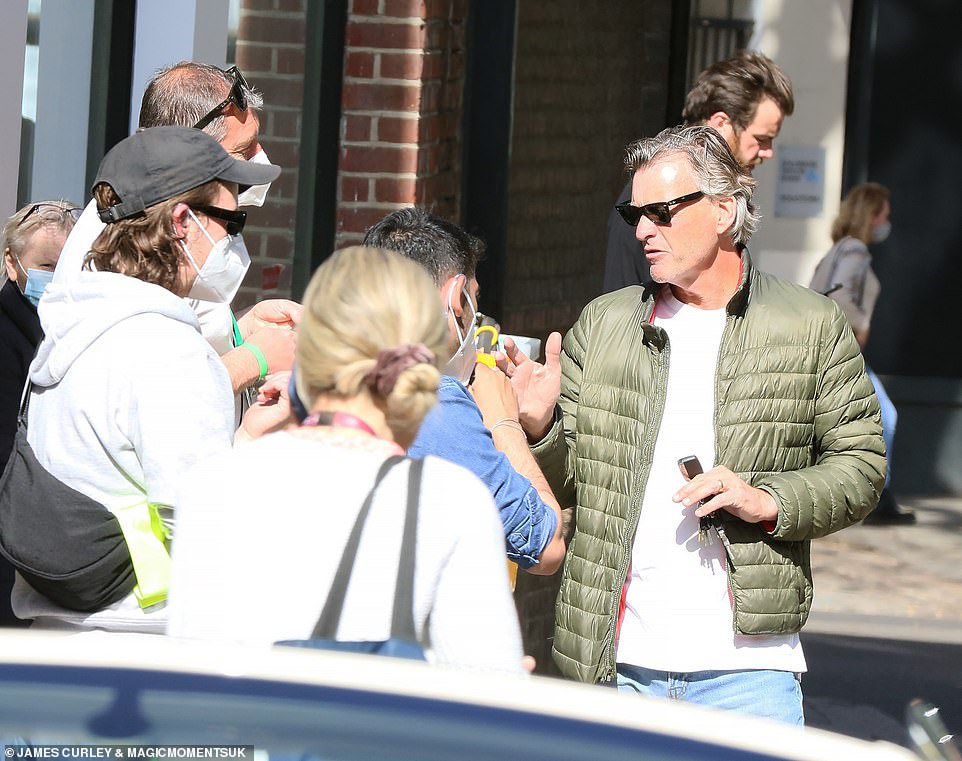 Explaining? He spoke with a few people outside in the sunshine

Richard previously said he’d be ‘bonkers’ to turn down the chance to fill Piers’ seat on the show, after the presenter quit in March in the wake of his reaction to Meghan Markle’s interview with Oprah Winfrey.

According to The Sun, bosses will test out Richard with a guest stint this summer, and are hoping he’ll be a good fit to replace Piers thanks to his background in journalism and no-nonsense approach during interviews.

A source said: ‘Piers is nigh-on impossible to replace and GMB execs accept this, but Richard has his own inimitable style.

‘Like Piers, he’s a trained journalist who knows how to press guests and get a decent ‘line’ from interviewees. He shoots from the hip, says what he thinks, and is a genuinely brilliant, likeable chap off air — so it’s very much a ”watch this space”.’

MailOnline has contacted representatives for Good Morning Britain and Richard Madeley for comment at the time. 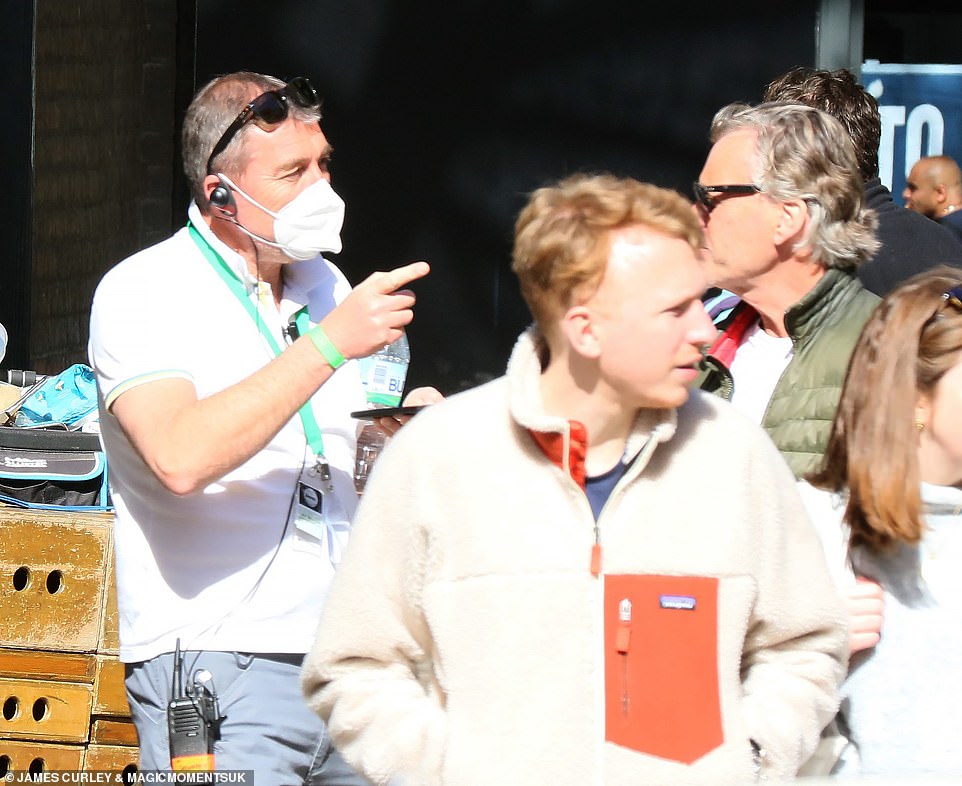 On set: Ricky confirmed After Life filming had started again on Monday after sharing a snap from set (Richard is pictured talking to a crew member on Friday) 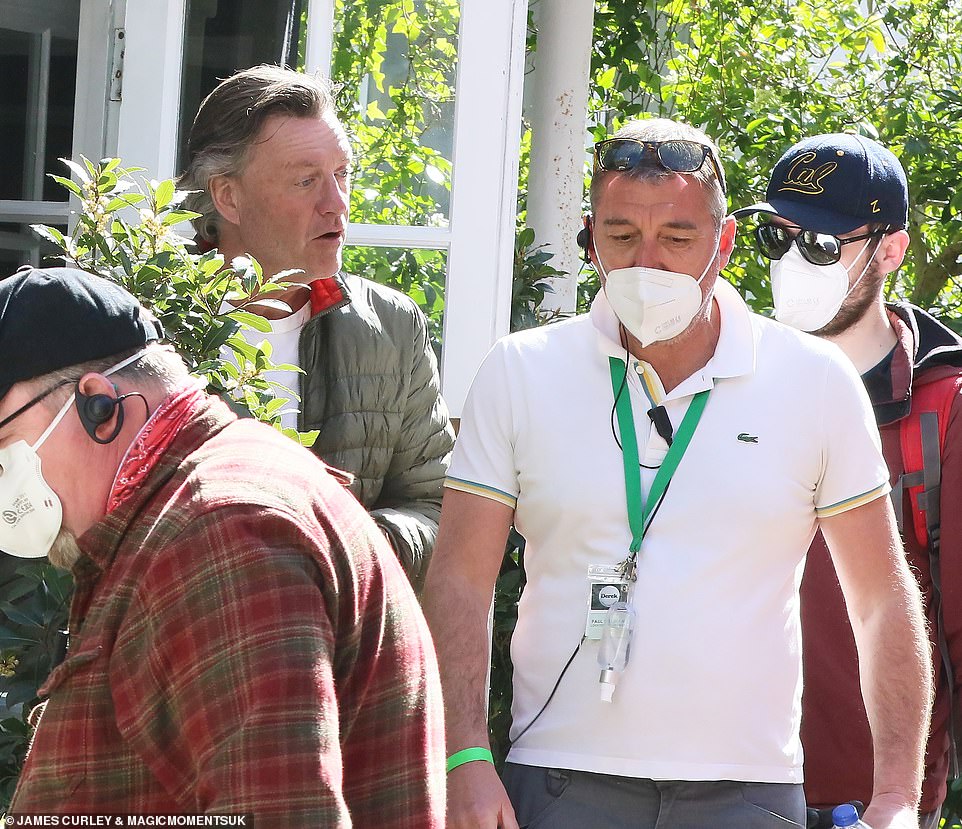 Oops! Richard seemed a little confused by what was going on and was bought up to speed by the man in the white top 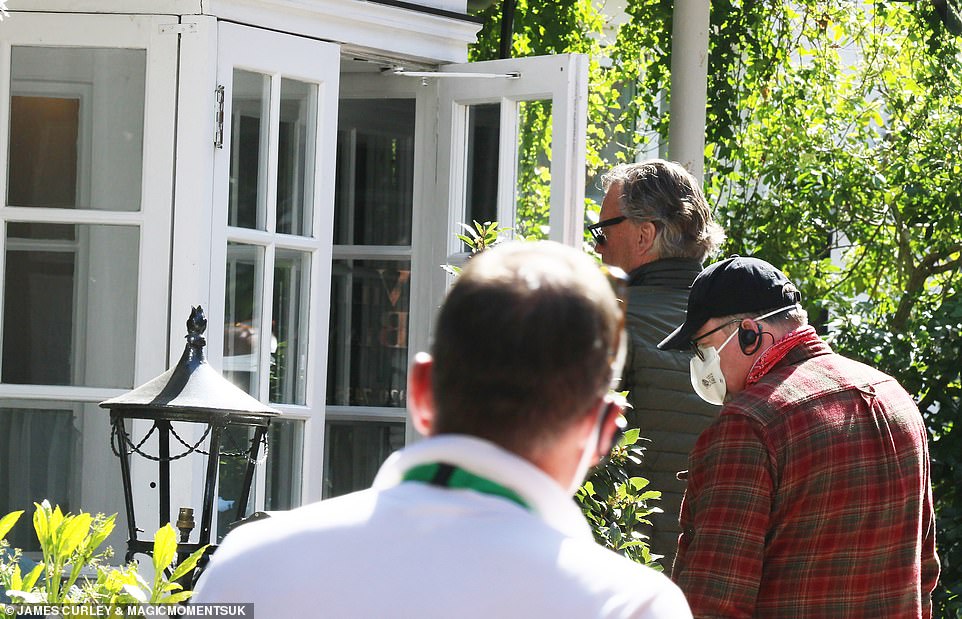 Stepping in: Richard’s appearance on the TV set comes after he was tipped to be in the running to replace Piers Morgan on Good Morning Britain

The reports come just days after Richard himself said he would be open to filling Piers’ seat on GMB.

He told Metro: ‘If the phone went and they said, ‘Would you come in and talk?’ of course I would talk to them. It would be bonkers not to. But I very much like sitting in for people. I have all the fun and very little of the responsibility or flak.’

And while Piers is regularly seen going toe-to-toe with trolls on Twitter, Richard insists he ‘doesn’t give a f**k’ about what they’d say about him should he leave himself open to criticism by sharing his views on the show.

He said of the possibility of facing trolls: ‘I personally couldn’t give a f**k. Far too many younger presenters have been affected by Twitter and cowed by it.

‘I remember when I started sitting in for Piers on Good Morning Britain, I’d have a look at Twitter after I’d done a programme and, yes, you get some nice comments but you also get horrendous abuse and, from time to time, death threats.’ 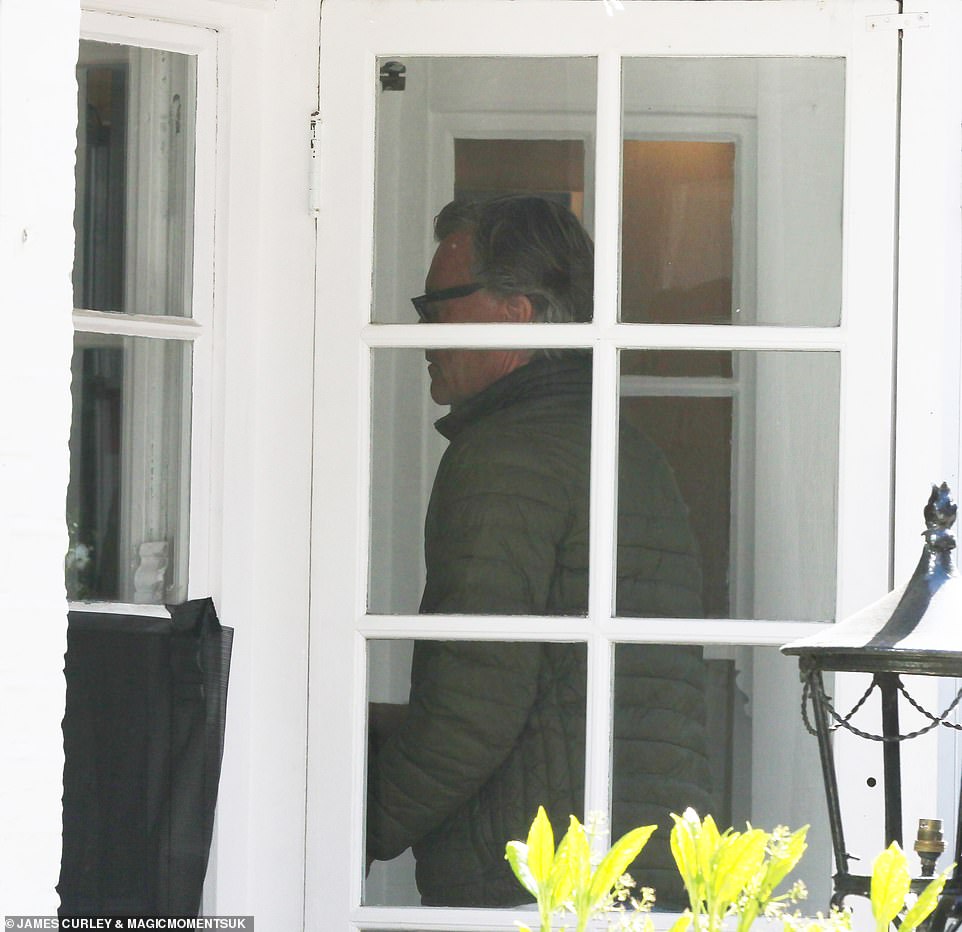 No luck: Richard was unable to get a table at the venue but tried his luck by heading inside anyway