While the 2020 virtual Emmys were admittedly strange, there was one comforting similarity between it and other award shows of the past: Regina King took home the trophies. The actress earned the Emmy for Best Actress in a Limited Series for her role in Watchmen and made poignant fashion choices along the way.

After winning her Emmy, Regina stepped into the virtual Emmy Awards press room, where she took questions from journalists around the world. Read through Regina’s take on how a virtual awards show stacked up to the IRL thing, the future of Watchmen, and her Breonna Taylor shirt below, courtesy of Cosmo‘s Emmys red carpet reporter Brandi Fowler.

What’s the big difference between accepting the award at home and accepting it with all of your peers?

I have to say my nerves are more jittery here at home. What a blessing to win an Emmy four times, but there’s something about being in that room and being able to share that moment with your peers and family and being able to look in everyone’s face and get hugs and know that you’re going to get a hug. I’m missing that. My brain kinda went blank. I didn’t get a chance to say I love you mom…it’s just such a weird moment. I didn’t get to recognize my cast, which I know I would’ve done looking at them out there. I like the real awards better. Not that these are fake. I don’t know what to call it.

The theme for tonight was “come as you are.” Why was it important for you to wear that [Breonna Taylor] shirt? 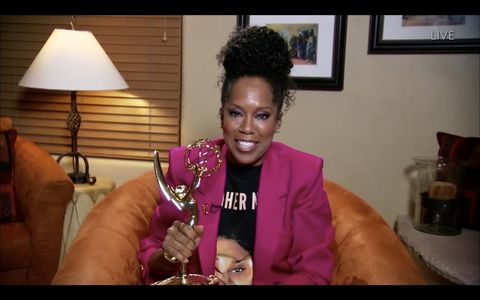 How are you taking this all in?

I’m taking it in moment by moment. I wish I was there with my comrades. I wish I was there to lock arms and celebrate. Winning Best Series is truly fantastic and a big reason is because of all of the fans and critics. People were really moved, as we were as artists telling the story, and it’s a lot. I’m still taking it in. I have a 4 a.m. call tomorrow. I’m sure the new family that I’ll be with will hold me up and remind me to enjoy and celebrate with grace.

Damon [Lindelof] said he’s invited other artists to take up the Watchmen baton. Have you discussed that?

I would want to do it again with Damon. There have been no conversations about the future of Watchmen. I’m just trying to settle and enjoy this strange moment. It feels good for the show to be recognized. We put so much into it. We’re coming to a close of this chapter of the Watchmen series as it is now, and it’s bittersweet, it’s emotional, and I’m just trying to remain in the moment.

Why is it important to use your voice to talk about this cause?

Whether you like it or not, when you decided to take on this career choice and be a part of the thespian community, if you have some success in it, you have a platform. I loved being a Black girl, I love being a Black woman, I love being American, and it’s important for people to see all of those things together. And when you have a platform to celebrate that and remind those who tend to look past Black girls, Black women, and you have the opportunity to celebrate, you take it, you seize it. When I saw my sister Uzo had on the same shirt, it was a confirmation that this was right.