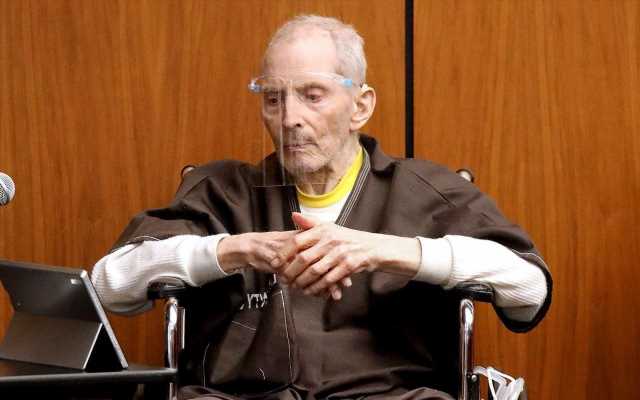 The 78-year-old, who was arrested in Louisiana nearly four years after he was last questioned about the fatal shooting of Susan Berman, will be sentenced at a later date.

Durst, 78, was arrested in Louisiana in March 2015, nearly four years after he was last questioned about the fatal shooting of his close friend, author Susan Berman in 2000. At the time, police lacked enough evidence to file charges against Durst, but the case was re-opened after the writer’s stepson acquired new evidence that pointed to him as the killer.

Los Angeles County prosecutors filed a first-degree murder charge against Durst, with special circumstances including murder of a witness and lying in wait, as well as weapons allegations.

On Friday, September 17, a jury convicted him in the execution-style murder. The verdict came after almost eight hours of deliberations.

Durst, who was not in court for the verdict due to a COVID concern, will be sentenced at a later date. His trial began in March 2020, but stalled days later for 14 months due to the coronavirus pandemic.

The prosecution called 80 witnesses but the most damning evidence came from Durst himself in an interview with Deputy Los Angeles County District Attorney John Lewin shortly after his arrest, in jailhouse phone calls and in more than 20 hours of interviews with the producers of hit documentary “The Jinx: The Life and Deaths of Robert Durst”.

Prosecutors also claimed Berman’s death was linked to the disappearance of Durst’s first wife and the killing of drifter Morris Black, but he was acquitted of the latter and never charged in connection with his wife, Kathie’s disappearance following multiple investigations across the state of New York.

During the murder trial, both Durst’s brother, Douglas, and his longtime friend Nick Chavin offered up testimony for the prosecution, with Chavin telling the court Durst contacted him in December 2014 and confessed to killing Berman outside a restaurant in New York, allegedly telling him, “It was her or me. I had no choice.”

In his closing arguments, prosecutor Habib Balian repeated the line, telling the court, “The case can be summed up in nine simple words: ‘It was her or me. I had no choice.’ That says it all.”