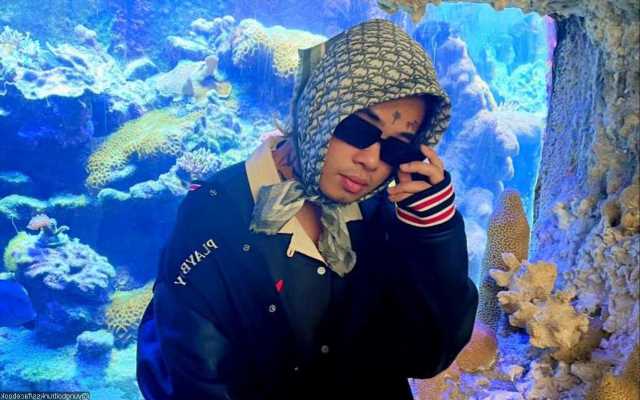 The 21-year-old emcee, who is XXXTentacion affiliate, receives support from Billie Eilish, Young Thug and Noah Cyrus after revealing he ‘almost died 2 times’ in three months.

AceShowbiz –Kid Trunks is getting extra candid about his latest brush with death. The Florida rapper revealed he was recently shot in the face and he has made use of his Instagram page to give a look at his injuries.

On Sunday night, March 20, the XXXTentacion affiliate uploaded two photos of him lying in hospital bed with blood on his neck. One of the pictures shows a bandage on his chin, while the other snap shows a significant gash under the bandage across his chin.

Trunks, whose real name is Minh Nguyen, didn’t reveal how he got injured, but alluded to being a shooting victim. He also asked for prayers in the caption as he revealed he was diagnosed with cancer earlier this year.

“Pray for me family. Almost died 2 times and it’s only been 3 months of 2022 smh first this cancer S**t and now this bulls**t…,” he wrote in the original version of the caption, before removing the latter part, “put the guns down man this s**t is real out here. | also everyone please move accordingly & militant everywhere & anywhere you go be safe but most importantly stay dangerous! I love you all for keeping my spirits high thru these tuff time – love trunks.”

In the comment section, Trunks’ friends and followers, including Billie Eilish, Young Thug and Trippie Redd, showed their support for him. Noah Cyrus wrote, “love u man,” Lil Tracy asked, “Bro are you okay?” and BRICKBOYDIOR! similarly commented, “Tf happen u good?”

Trunks, who is a member of XXXTentacion and Ski Mask The Slump God‘s Members Only collective, found out he had cancer after testing positive for COVID-19. He had initially kept the news to himself until his account was allegedly hacked in January with disturbing news being shared on the page, sparking death rumors.

“My account was hacked posted on then the post was deleted u guys,” Trunks explained after the incident. “I wanted to keep silence about my situation but I’ll explain to you guys later today… I was near death but I didn’t die! Thanks you all for being there & caring. I caught Covid 19 & while in the process of them checking my body out they found I had pneumonia cancer aka chest cancer #f**kcancer #Webuiltstrong.”