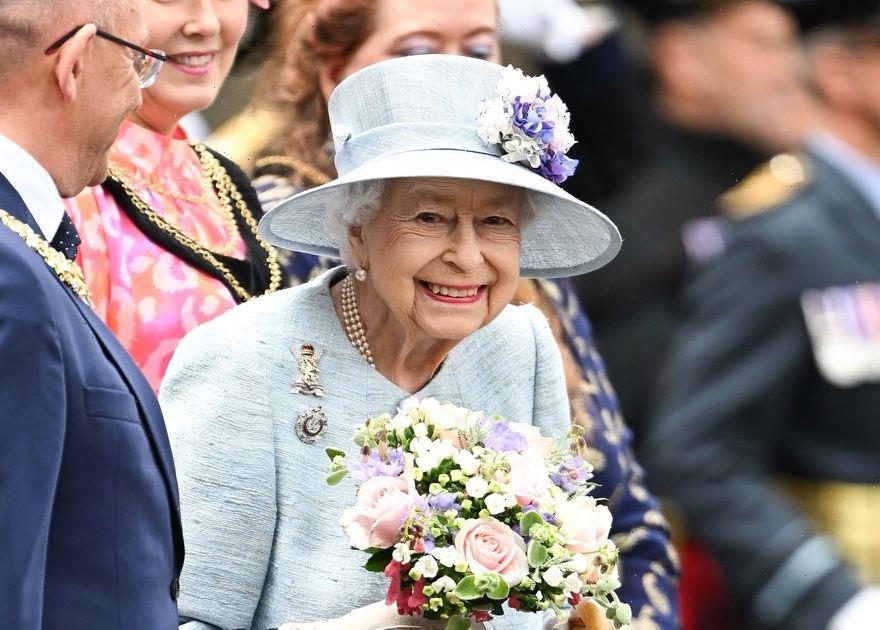 The Queen has been seen beaming as she arrived in Scotland leaning on a walking stick amid her ongoing mobility issues.

Her Majesty, 96, was photographed dressed in a light blue coat with a matching hat that featured purple flowers on the front.

The monarch, who recently defied doctors by getting "back in the saddle", donned a white floral dress underneath her jacket, which she paired with some black loafers and a matching black purse.

Beaming to the camera, the Queen carried a bouquet of flowers in one hand as she leaned on a walking stick with her other.

She travelled to Scotland today on Monday 27 June for a full week of events, including Edinburgh's history Ceremony of the Keys – the traditional opener to Holyrood week for the Royals.

Prince Edward, Earl of Wessex, 58, and his wife, Sophie, 57, joined Her Majesty for the event, which is taking place at the Palace of Holyroodhouse.

The ceremony traditionally sees the monarch handed the keys of the city and welcomed to her “ancient and hereditary kingdom of Scotland”.

This is the Queen's first trip since her Jubilee, which celebrated her 70 years on the throne that brought together tens of thousands of people from across the entire Commonwealth.

From street parties and military parades, through to colourful carnivalesque performances and live musical acts from some of the biggest names, the four day long celebration has encapsulated the respect and appreciation so many people have for the long reigning monarch who has touched so many of their lives.

Yet it was the Queen herself who was deeply moved by the support of so many as she shared a sweet and poignant message of gratitude with fans and well wishers on social media.

Posting on the official Royal Family Twitter account, she wrote: “When it comes to how to mark seventy years as your Queen, there is no guidebook to follow.

"It really is a first. But I have been humbled and deeply touched that so many people have taken to the streets to celebrate my Platinum Jubilee.

“While I may not have attended every event in person, my heart has been with you all; and I remain committed to serving you to the best of my ability, supported by my family.

“I have been inspired by the kindness, joy and kinship that has been so evident in recent days, and I hope tis renewed sense of togetherness will be felt for many years to come.

“I thank you most sincerely for your good wishes and for the part you have all played in these happy celebrations.”