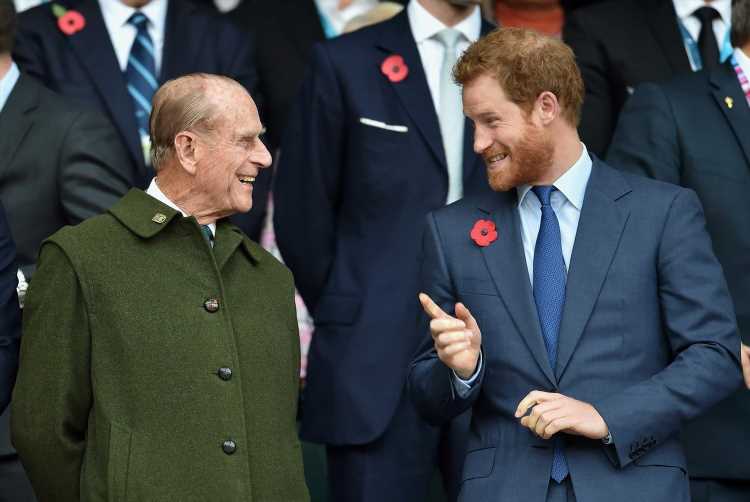 Prince Harry is mourning the loss of his grandfather, Prince Philip.

On Monday, the Duke of Sussex shared a personal statement following the death of the Duke of Edinburgh, saying, "My grandfather was a man of service, honour and great humour. He was authentically himself, with a seriously sharp wit, and could hold the attention of any room due to his charm—and also because you never knew what he might say next.

"He will be remembered as the longest reigning consort to the Monarch, a decorated serviceman, a Prince and a Duke. But to me, like many of you who have lost a loved one or grandparent over the pain of this past year, he was my grandpa: master of the barbecue, legend of banter, and cheeky right 'til the end.

"He has been a rock for Her Majesty The Queen with unparalleled devotion, by her side for 73 years of marriage, and while I could go on, I know that right now he would say to all of us, beer in hand, 'Oh do get on with it!'

"So, on that note, Grandpa, thank you for your service, your dedication to Granny, and for always being yourself. You will be sorely missed, but always remembered—by the nation and the world. Meghan, Archie, and I (as well as your future great-granddaughter) will always hold a special place for you in our hearts."

Harry concluded his statement with the Royal Marines motto, "Per Mare, Per Terram," which translates to, "By Sea, By Land."

The Duke of Edinburgh "passed away peacefully" on Friday at Windsor Castle. He had recently been in the hospital where he was being treated for an infection and underwent a heart procedure. Harry's statement follows his brother Prince William's tribute to their grandfather on Monday. The Duke of Cambridge shared a never-before-seen photo of his son Prince George riding in a carriage with Prince Philip in 2015.

"I will never take for granted the special memories my children will always have of their great-grandpa coming to collect them in his carriage," William shared. Harry arrived in the U.K. on Sunday to attend his grandfather's funeral next weekend. Meghan Markle, who is expecting the couple's second child, a baby girl, did not accompany her husband after being advised by her physician not to make the trip to the U.K.

It marks the first time Harry has been in his home country in over a year. It is also the first time he will see members of the Royal Family since his and Meghan's interview with Oprah Winfrey aired last month.

Prince Harry, 36, has always been very close with his grandfather. They were often seen smiling and laughing while on royal outings together. Philip also played a crucial role in Prince William and Prince Harry's lives after the death of their mother, Princess Diana, in 1997.

In The Diana Chronicles, author Tina Brown wrote, "A member of the Balmoral staff noted that Prince Philip, who had effectively lost his own mother at the age of ten when she was committed for three years to an asylum in Switzerland, was brilliantly effective with his grandsons, offering them gruff tenderness and outdoor activities like stalking and hiking to tire them out." Although he retired from public duty in 2017, the Duke of Edinburgh was in attendance for many important family milestones. He attended Harry and Meghan's royal wedding in May 2018. He was also present for a historic family photo after the birth of the couple's first child, Archie.

Philip, who would have turned 100 in June, had been plagued by health issues in recent years. He made a rare appearance in public last July at a brief ceremony at Windsor Castle.

Can't get enough of PEOPLE's Royals coverage? Sign up for our free Royals newsletter to get the latest updates on Kate Middleton, Meghan Markle and more

Most recently, he celebrated the news that Harry and Meghan announced that they are expecting their second child.

Following the news of his death, royal officials confirmed Philip's funeral will take place April 17, as expected, and his coffin will be processed through Windsor Castle.

The funeral will take place entirely within the grounds of the castle and plans have been given final approval by the Queen but they "still very much reflect the personal wishes of the Duke. The occasion will still celebrate and recognize the Duke's life and his more than 70 years of service to the Queen, the U.K. and the Commonwealth."