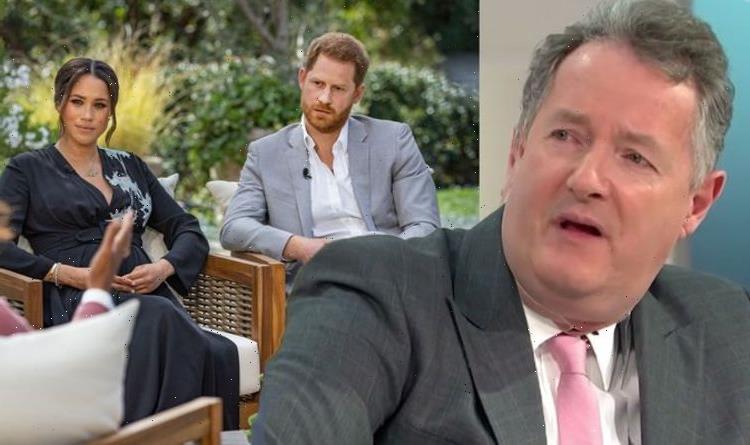 Piers Morgan, 56, has shared his anger at losing his job on Good Morning Britain after he publicly refused to believe Meghan Markle’s, 40, comments on her mental health that she made while speaking to talk show host Oprah Winfrey back in March. The broadcaster was told to “apologise” for his remarks by ITV or leave his position on the breakfast show, which he claims was him being effectively “forced out” by the channel after the Duchess Of Sussex demanded his “head on a plate”.

Today he has been cleared by TV regulator Ofcom and Piers raged that he should never have had to lose his livelihood to begin with.

He wrote: “It was preposterous that I had to leave a job I loved.

“But it happened because the corporate world has been cowed into surrendering to the woke mob whenever it bays for blood.”

Piers has shared that he is now “delighted” to have been supported by Ofcom.

And have his “right” to disbelieve both Meghan and her husband Prince Harry’s claims against the Royal Family.

He added in his MailOnline column: “This is a resounding victory for free speech.”

In a statement by Ofcom, they said restricting his views would be a “chilling restriction” on free expression.

But it criticised his “apparent disregard” for the subject of suicide.

Ofcom said its decision was “finely balanced”, but that ITV had “provided adequate protection to viewers from potentially harmful and highly offensive statements about mental health and suicide”.

Piers received a record number of complaints about the comments he made during a March episode of GMB, that aired the day after Meghan and Prince Harry sat down with Oprah.

During the interview, the Duchess said she had suffered from suicidal thoughts while working as a senior member of the Royal Family.

The statement left Oprah looking visibly shocked during their discussion.

Discussing the comments made by the Suits actress, Piers said: “I’m sorry, I don’t believe a word she says. I wouldn’t believe her if she read me a weather report.”

An Ofcom spokesperson said at the time: “We have launched an investigation into Monday’s episode of Good Morning Britain under our harm and offence rules.”

The following day after the TV regulator announced their investigation, Piers addressed his divisive comments about Meghan’s mental health on the show.

He said: “When we talked about this yesterday, I said as an all-encompassing thing I don’t believe what Meghan Markle is saying generally in this interview, and I still have serious concerns about the veracity of a lot of what she said.

“But let me just state on the record my position about mental illness and on suicide.