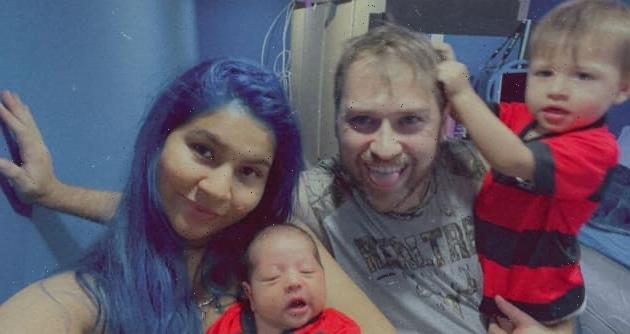 Remember less than a month ago when Karine Martins called the police on Paul Staehle?

We know that this is hardly the first time that their messy trainwreck of a marriage has involved law enforcement.

90 Day Fiance fans haven’t forgotten. But it looks like, somehow, these two have.

Paul and Karine are apparently back together … and it looks like they may be planning to have a third child.

This time, it wasn’t by going Live while police were questioning him or sharing a wall of text to defend himself.

Instead, he shared one simple image. This image, to be exact:

On Wednesday, September 1, Paul showed what many initially assumed to be a pregnancy test.

That is not what it is — but it was enough to cause a stir.

What the product actually is … well, for fans who dread the idea of Paul and Karine having another child in their tumultuous marriage, even worse.

The subject of the photograph appears to be a Clearblue Advanced Digital Ovulation Test.

An ovulation test is not a pregnancy test — this is a much earlier step, so to speak.

Such a tool is used to determine peak fertility days … generally to help a person or couple (or throuple, etc) conceive.

Normally, fans are overjoyed when a reality star couple announces that they are expecting.

Viewers and followers celebrate the news and keep up with the stars for updates.

So … why is the tone on social media so different as Paul’s teaser image gets passed around?

Well … Paul and Karine are a mess, that’s why.

While it’s not true that “every couple fights,” it is considered common — not universal, but common — for partners to clash.

They do not always share all of the details of their conflicts with fans, but we see enough.

Last year, in late July, Paul went Live on Instagram while police spoke to Karine and to him at their home.

That was followed by a bitter separation that lasted for weeks and included reports of accusations of abuse and controlling behavior.

Despite that, the two reconciled.

Together, they returned to Brazil, where a pregnant Karine gave birth to their second child.

Earlier this year, Paul and Karine returned to the United States, having been spotted in Florida, Kentucky, and possibly California.

Almost exactly one year after Karine called 911 on Paul in 2020, they broke up again.

Another call to police was involved, though this time it was kept more under wraps than in the past.

Was this their final breakup? Of course not. The two of them seem to do this more often than some change their shower curtain liners.

It took all of two weeks for Karine to signal that she and Paul were in a better place.

She posted a family photo to Instagram later in August.

“It doesn’t matter if it’s a good time or a bad one, but if it’s with you, every second will be worth it,” Karine captioned.

Of course, since then, Karine has deleted that photo without explanation.

(We have it because I saw it, thought “wow these two dirty delete all of the time,” and took a quick screenshot while it was still up)

What that deletion is supposed to mean … that’s anyone’s guess.

It only gets weirder now that Paul seems to be indicating that they’re trying for Baby #3.

The only alternatives are that it’s a weird, untagged product endorsement, that it’s a prank, or that Paul is trying to get pregnant with someone else.

At least, those are the only explanations that make sense to us. Paul, as we know, exists in his own little world.