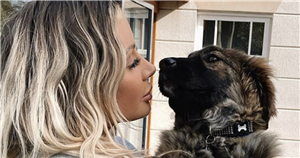 Olivia Attwood and fiancé Bradley Dack have got matching tattoos for their adorable dog Lola.

The couple are currently on holiday together in Ibiza and shared photos of their new ink to Instagram, saying they were “in tribute” to the couple’s “first baby”.

30-year-old Olivia posted a gallery of images to Instagram, with two photos of herself enjoying the sun on a balcony wearing a black crop top and denim shorts, alongside close-ups of the couple’s new tattoos.

The former TOWIE star wrote: “It was cloudy one afternoon so Brad and I walked into town and randomly got tattoos in tribute to our first baby. Cute? Or totally lost it?”

Olivia’s tattoo says ‘Lola’ in red ink with the letters ‘b’ and ‘d’ above it. Footballer fiancé Bradley’s tattoo has Lola’s name written in black with the numbers ‘201020’.

“Psssss – the ‘b d’ above Lola is an old one standing for Bradley Dack…” Olivia explained. “Not ‘bad’ as some people think, although ‘bad lLola’ would be quite fitting some days.”

Olivia and Brad adopted Lola back in April when she was five months old. The carpathian and German shepherd mix had been abandoned in the snow along with her siblings by her original owners in Romania.

Announcing Lola’s arrival on Instagram earlier this year, Olivia explained: “Brad and I have waited years to get a dog and I can’t believe she’s actually here and she’s ours. And what I can believe even less is that we get to have this beautiful dog as part of our family because someone else deemed her not worthy of being in theirs.”

According to Olivia, Lola and her siblings “were found crying in the snow on New Year’s Day in Romania after being dumped”.

The couple worked with dog rehoming project The Pack Project when looking for a dog to welcome into their home. After deciding an older dog wasn’t quite right for them, they heard about Lola and they “completely fell in love”.

“I had been speaking to the absolute wonder woman Laura Walker – founder of the @thepackprojectuk – about an older dog that was looking for a home. We both decided that possibly our home wasn’t right for that particular dog – and then Laura mentioned Lola. She sent a couple of pics over and I fell completely in love.”

“The following weeks took lots of planning and unimaginable work from @thepackprojectuk to get Lola and so many other dogs to the UK to start their new lives, the ones they deserve.”

Olivia and Bradley started dating in 2015 but split before Olivia appeared on Love Island in 2017. She later dated Islander Chris Hughes but after their split reconciled with Brad. The couple announced their engagement in October 2019.