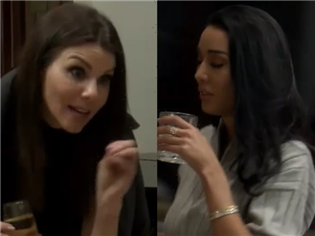 On Saturday, March 27, Will Smith made Oscars history by slapping Chris Rock after he mocked Jada Pinkett Smith’s autoimmune disorder.

Everyone and their neighbor had a take, some of which were truly hyperbolic and absurd — from supporters and detractors.

She also strongly hinted that she was accusing Heather Dubrow of hypocrisy and violence.

“I know I am going to get backlash but I need to speak my truth… and point out hypocrisy,” Noella wrote.

“The extraordinary man, entertainer, husband that is Will Smith gave me my first break at 15,” she recalled.

Noella shared that she appeared “in his Will 2k music video (yes that’s me on the piano in a blonde wig).”

“I have only known Will to be a gracious and kind soul,” she wrote.

Noella added: “I am however a firm believer that violence is never the answer.”

“Greater than forgiveness I understand Will,” she added.

Noella explained: “In his mind he was defending his family.”

Noella did not stop there, however.

“I have to speak out when hearing a ‘friend’ who did the EXACT same thing is jumping on the bandwagon,” she wrote.

Noella shaded that someone is trying “to cancel this genuinely good person who has shown more depth in 48 [hours] than her shallow soul.”

“Just wish more people in my circle were cut from the same cloth as Will Smith,” Noella expressed.

Naturally, given her repeated conflicts with a certain castmate came to mind.

Is Noella accusing Heather of being somehow violent … and then hypocritically condemning Will?

“Oooo is she referring to Heather??? Tune into Bravo to find out lol,” one commenter wrote.

That particular Jurassic Park quote was not, one assumes, referring to a velociraptor this time.

“Are you insinuating Heather was violent? Please no cryptic, convoluted posts. We don’t know you like that,” demanded a very bossy comment.

It has been widely speculated that production is unhappy with Heather and is no longer doing her any favors after she allegedly shoved a camera operator.

Obviously, there is a lot of rumor involved (no, Kelly Dodd is not a reliable source on … anything) surrounding Heather.

Perhaps Noella is confirming that Heather is worse than people know. Or maybe she’s using rumor to further her own agenda. We don’t know!

However, it’s clear that these two are clashing.

It’s interesting, because Heather is a returning Housewife while Noella is new, but they are somehow on equal footing.

Noella’s drama this season, though unforeseen, has given her a real boost, and she knows it — and she’s happy to go head-to-head with Heather.

These two ladies just plain do not like each other, and have been clashing with increasing ferocity all season.

Their mutual loathing has continued off screen, with Heather recently declaring that she and Noella can never be friends.

That suits Noella just fine, as she says that Heather doesn’t really want friends — she wants “minions” — and Noella refuses to be one.