Nicki Minaj did a Q&A about her childbirth experience and she’s arguably never been more candid! The rapper admitted that she was cool and calm when her water broke, but the same can’t be said for her husband!

Nicki Minaj was surprisingly the “calm” and “quiet” one when her water broke in September. The Grammy-nominated rapper, 38, admitted to the latter during a Twitter Q&A with fans on December 30 — where she also mentioned that Kenneth Petty was “very scared” at the time.

When a fan asked, “Did your water break at home and what was that experience getting to the hospital?,” Nicki replied, “Yes. I was butt naked. Just got out the shower & I asked him to rub my back.” The fan also inquired if “Zoo” (Kenneth’s nickname) was scared, to which Nicki explained, “As soon as I started scooting over to him in the bed I just felt the water start coming out. I was weirdly calm & I quietly said ‘omg, I’m about to be in labor.’ He was very scared & I was laughing @ him,” she wrote.

Nicki finally admitted, via Instagram on December 30, that she gave birth to the couple’s son three months prior. “Happy 3 months Bday,” she captioned a throwback photo from her pregnancy shoot, adding the hashtag “#PapaBear” — the cute moniker she uses on social media when referring to her son. “Mommy & Daddy love you soooo much,” Nicki, who has not yet announced her son’s official name, added. Additionally, the couple has not yet shared a photo of their son’s face. 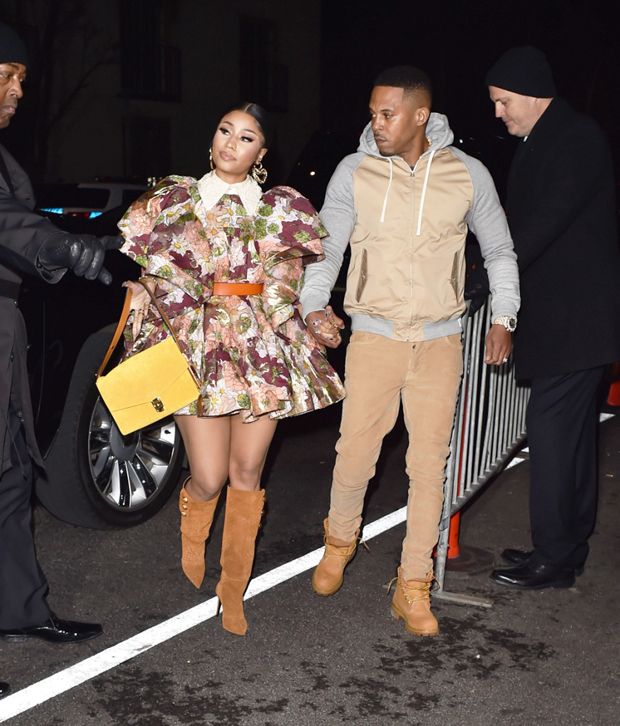 When another fan asked Nicki how long her labor was, she replied, “Well I was actually in labor all night but all they did was let me sleep until I dilated far enough to push. The epidural didn’t hurt either. They numbed me up real good. So I took my a** right to sleep.”

In a separate tweet, Nicki shared that she had a “natural vaginal birth w/epidural,” explaining, “I pushed for 2 1/2 hours. Only b/c first the epidural didn’t wear off enough for me to feel myself pushing. Once I was able to feel the pain I pushed him on out.”

The first-time mom also noted that her son “had no problem breastfeeding” and admitted that “he latched on in the hospital which was very surprising to me. I was afraid maybe he wouldn’t.” Nicki went on to warn that “breast feeding is very painful. Pumping is too.” She gushed that “women make this stuff look way too easy,” adding, “Moms r really superheroes.”

Speaking of moms, Nicki mentioned that singer Ciara “was sooooooo helpful,” with advice about motherhood. She even told one fan that her good friend and “Side to Side” collaborator, Ariana Grande sent her son “some gorgeous gifts” after she announced her pregnancy.

While Nicki was an open book, she kept some details about her personal life under wraps — having noted that fans will have to “wait” for her HBO Max documentary for more info. As for what fans will see in the new docuseries? That’s still unclear, however, Nicki has promised to deliver a “next level” documentary that her beloved “Barbz” with cherish “forever.” She even hinted on Twitter that fans may see Kenneth’s reaction to her pregnancy news, as well as the debut of their son.

Although the world hasn’t met the couple’s first child, Nicki shared that he knows how to get what he wants — even at three months. “He used to kick me so hard every night at the same time if I didn’t get up & walk with him. He had a full personality in my tummy & knew how to get his way,” she wrote on Twitter. “It was so intriguing to me. He does the same thing now.”