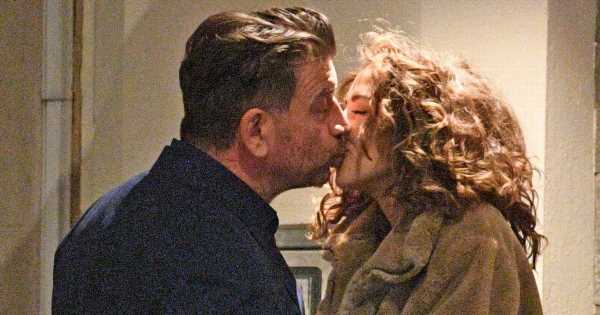 Nick Knowles, 59, has proved his relationship is stronger than ever with his girlfriend Katie Dadzie, 31, as they've been photographed sharing a passionate kiss on the street.

The DIY SOS star, who previously was left facing the axe on the show after breaking strict BBC rules, was seen enjoying a cigarette break with his other half as they dined out at Hakkasan restaurant in Mayfair, London, on 16 April.

Presenter Nick could be seen dressed quite dapper as he wore navy shirt with a matching blazer on top alongside a pair grey jeans and some black smart shoes.

Meanwhile, his girlfriend Katie donned a glittery pink skirt, that she teamed with a beige furry jacket and a pair of strappy heels.

Katie accessorised her look with a clutch purse that she draped over her shoulder. Keeping her make up to a minimum, she wore eyeliner and mascara alongside a nude lip.

The couple were seen gazing lovingly into one another's eyes before leaning to share an intimate kiss.

Nick, who recently shed two stone after eating "all the pies" during the Covid-19 pandemic, and his significant other than made their way down the street to look at Bentley Cars in a showroom before then catching a taxi to head home.

An onlooker told the Mirror of their romantic evening: “Nick and his girlfriend looked pretty loved up as they wandered down the street.

"They were smiling and laughing as they looked at the new Bentleys through the showroom window, before hopping in a taxi together.”

Nick and Katie were first said to have got together last year in August after meeting several years prior at a children's playgroup.

At the time, a source told The Sun about their relationship: "They actually met through their youngest offspring and went on a few playdates as pals, before romance blossomed. Katie is a beautiful woman, fiercely independent and just Nick’s type.

“They’ve met one another’s friends and, although it’s early days, everyone is hopeful this might be for keeps," they added.

The BBC presenter split from his wife Jessica Rose More in 2016, four years after they got hitched, and the pair have one child.

Nick and his first wife, Gillian, were married from 1995 to 2000 and had three children together. He then moved on with fellow presenter Suzi Perry before their split after living together for three years.

Nick then met former Emmerdale star Gemma Oaten at the TV Choice Awards in September 2016, where he promptly asked her out to dinner.

For all your updates on Nick Knowles, sign up to our daily OK! newsletter.