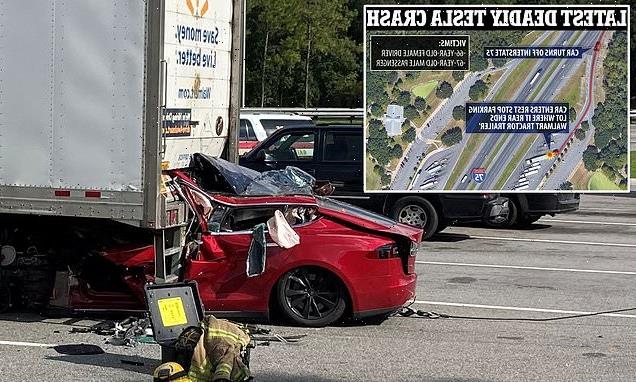 NHTSA opens THIRTY-SEVENTH Tesla crash probe after couple from California were killed when their Model 3 smashed into back of Walmart truck in Florida, with impact shearing car’s roof off

Safety officials have opened a 37th probe into a Tesla crash after a couple’s car slammed into the back of a Walmart truck, shearing its roof off.

The National Highway Traffic Safety Administration (NHTSA) is investigating the wreck, which happened at the Paynes Prairie Rest Stop just south of Gainesville, Florida, on Wednesday.

Its female driver, aged 66, and her 67 year-old male passenger were killed. The pair were visiting from Lompoc in California, and neither their age nor their relationship to one another has been disclosed, in accordance with Florida state laws.

The Tesla – a 2015 S model – was driving on Interstate-75 souhbound when it exited off the highway onto the rest stop ramp ‘for an unknown reason,’ Florida Highway Patrol said in statement.

The car then drove through the parking lot where it rear-ended the trailer of a Walmart 18-wheeler, killing the 66-year-old female driver and a 67-year-old male passenger.

Photos from the scene showed the front end of a red Tesla jammed under the overhang of a Walmart trailer, the top end of the car sheared violently back past the car’s front doors.

The victims  were pronounced dead at the scene.

The accident is the second fatal Tesla crash in a week to be investigated by the NHTSA.

They say its too early to disclose a possible cause, but that Tesla’s controversial autopilot self-driving technology is being probed over the incident. 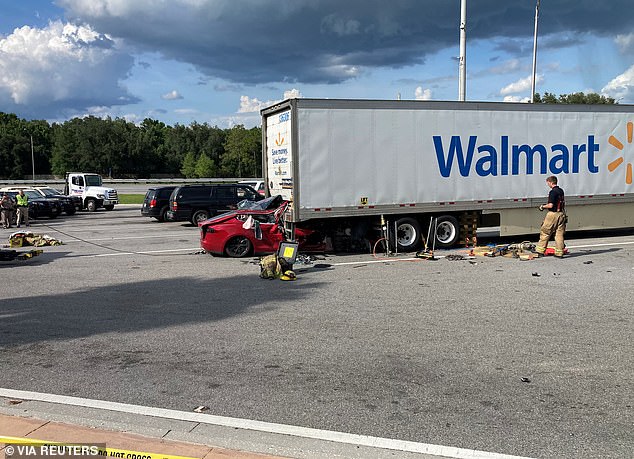 Photos from the scene show the front end of a red Tesla jammed under the overhang of a Walmart trailer, the top end of the car sheared violently back past the car’s front doors 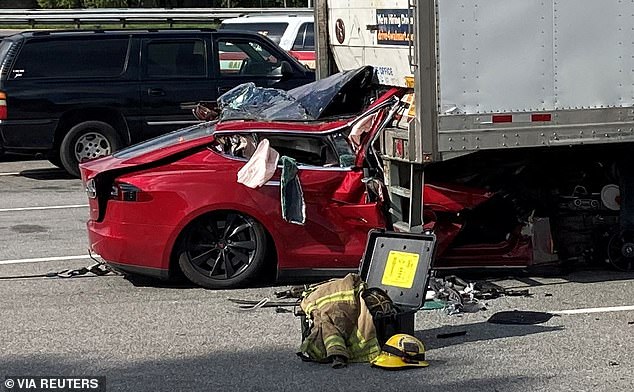 A close-up of the same image shows the sheer violence of the crash, with most of the Tesla’s roof sheared off by the impact of the smash 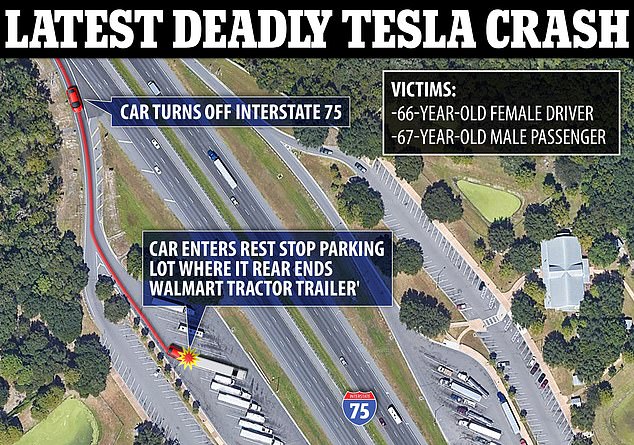 Highway Patrol Lt. P.V. Riordan said in an email that authorities were looking into whether automated features were involved in the wreck.

Previous autopilot-related crashes were linked to the Teslas’ cameras being confused by flashing lights and reflectors on stopped emergency vehicles, but there is currently no suggestion the Florida crash involved an ambulance, cop car or fire truck.

‘That is a consideration that will be explored during our investigation,’ he said.

The 2015 Teslas were the first to use the company’s autopilot technology, but did not include fully automated options. Instead they used a number of features intended to assist drivers, including automated in-lane steering, and automated lane changing prompted by the driver’s commands.

‘The driver is still responsible for, and ultimately in control of, the car,’ Tesla wrote in a blog post announcing describing the then-new features. They’re warned to keep their hands on the wheel at all time. 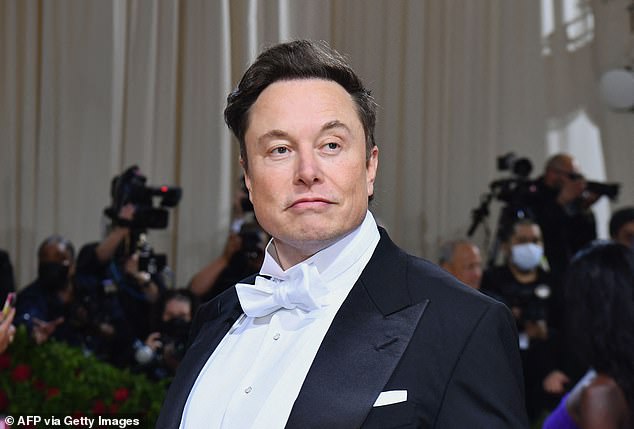 Wednesday’s crash bore a striking similarity to a score of Tesla crashes that have occurred since 2015 in which drivers were killed when their cars merged into tractor trailers and wound up beneath them.

The NHTSA has opened 37 special crash investigations involving Tesla vehicles in which advanced driver assistance systems like autopilot were suspected of being used since 2016, according to Reuters.

A total of 17 crash deaths have been reported in those Tesla investigations, including the Florida wreck.

The NHTSA typically opens more than 100 special crash investigations annually into emerging technologies and other potential auto safety issues that have, for instance, previously helped to develop safety rules on air bags.

This latest investigation comes after the NHTSA announced it would be investigating an accident in which a man, 39, struck and killed a woman while reportedly being high on drugs and driving a Tesla on Autopilot.

The San Diego Union-Tribune reported on June 7 that the Tesla went airborne and struck and killed the woman. NBC 7 San Diego said the man was charged with vehicular manslaughter and driving under the influence of drugs in the incident.

The case is believed to have involved Frank Shoaf, who was high from huffing – inhaling household items – while driving on Othello Avenue around 8.30am. He admitted to police that he had run the red light then hit a dip, which caused him to go airborne two feet, before he hit Cassandra May, 40.

After Shoaf struck the woman, her body reportedly was lunched seven to eight feet in the air before landing 25 feet away. She was transported to the hospital, where she later died.

As his car continued forward, it crashed into a no parking sign and landed in a bush outside of a local KFC with one of its tires missing. 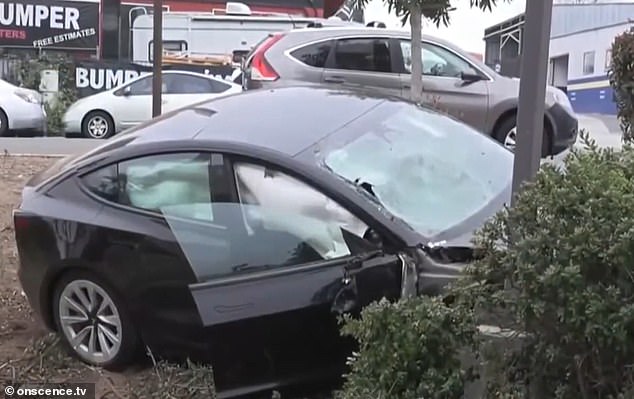 The accident is the second Tesla crash in a week to be investigated by the NHTSA. Last week a man, 39, struck and killed a woman while reportedly being high on drugs and driving a Tesla on Autopilot

In June, the NHTSA upgraded its defect probe into 830,000 Tesla vehicles with Autopilot, a required step before it could seek a recall.

The NHTSA opened a preliminary evaluation to assess the performance of the system in 765,000 vehicles after about a dozen crashes in which Tesla vehicles struck stopped emergency vehicles – and said last month it had identified six additional crashes.

The NHTSA Administrator Steven Cliff told Reuters on Wednesday he wanted to complete the Tesla Autopilot investigation ‘as quickly as we possibly can, but I also want to get it right. There’s a lot of information that we need to comb through.’

Nearly 400 car crashes in the US within a ten-month period were caused by self-driving or driver assistance technology, NHTSA report found.

Teslas were involved in the vast majority of those crashes, 273 out of 392, which occurred between July 1, 2021, and May 15 this year and resulted in six deaths and five serious injuries.

Worldwide automobile companies made the disclosures to the NHTSA after the regulator issued an order in June 2021 requiring automakers and tech companies to immediately report all crashes involving advanced driver assistance systems (ADAS) and vehicles equipped with automated driving systems being tested on public roads.

Of the remaining amount of crashes involving ADAS technology reported by a dozen automakers, 90 of them involved Hondas and 10 were Subrarus. Ford Motor, General Motors, BMW, Volkswagen, Toyota, Hyundai and Porsche reported fewer than five incidents each.

January 20, 2016 in China: Gao Yaning, 23, died when the Tesla Model S he was driving slammed into a road sweeper on a highway near Handan, a city about 300 miles south of Beijing. Chinese media reported that Autopilot was engaged.

May 7, 2016 in Williston, Florida: Joshua D. Brown, 40, of Canton, Ohio died when cameras in his Tesla Model S failed to distinguish the white side of a turning tractor-trailer from a brightly lit sky.

The NTSB found that the truck driver’s failure to yield the right of way and a car driver’s inattention due to overreliance on vehicle automation were the probable cause of the crash.

The NTSB also noted that Tesla Autopilot permitted the car driver to become dangerously disengaged with driving. A DVD player and Harry Potter movies were found in the car.

March 23, 2018 in Mountain View, California: Apple software engineer Walter Huang, 38, died in a crash on U.S. Highway 101 with the Autopilot on his Tesla engaged.

The vehicle accelerated to 71 mph seconds before crashing into a freeway barrier, federal investigators found.

The NTSB, in a preliminary report on the crash, also said that data shows the Model X SUV did not brake or try to steer around the barrier in the three seconds before the crash in Silicon Valley.

NTSB investigators said Banner turned on the autopilot feature about 10 seconds before the crash, and the autopilot did not execute any evasive maneuvers to avoid the crash.

A Tesla smashed into a tree and burst into flames in Texas, resulting in the deaths of two men – the car’s owner Doctor William Varner, and his pal Everette Talbot.

Police had said it was apparent that there was no one in the driver’s seat at the time of the crash in the wealthy The Woodlands neighborhood of Houston, on April 17.

But Tesla had refuted police’s claims, saying a deformed steering wheel suggested that someone was likely in the driver’s seat.

Varner, 59, and Talbot, 69, both died in the fatal crash when the Tesla Model S  – bought second-hand off eBay in January – smashed into a tree and burst into flames.

Dr. William Varner, 59, and Everette Talbot, 69, both died in the fatal crash when the Tesla Model S smashed into a tree and burst into flames

Steven Michael Hendrickson, 35, was killed when his white Tesla Model 3 struck an overturned semi-truck at about 2.30am on May 5

Steven Michael Hendrickson, 35, was killed when his white Tesla Model 3 struck an overturned semi-truck at about 2.30am on May 5.

Before his death, the married father of two posted social media videos of himself riding in the electric vehicle without his hands on the wheel or foot on its pedal.

The crash happened on the 210 Freeway near Fontana, California – about 50 miles east of Los Angeles.

A preliminary investigation determined that the Tesla’s partially automated driving system called Autopilot ‘was engaged’ prior to the crash.

The Mack truck, which the Tesla collided with, had crashed and overturned just five minutes earlier, blocking two lanes of the highway, according to a highway patrol report.