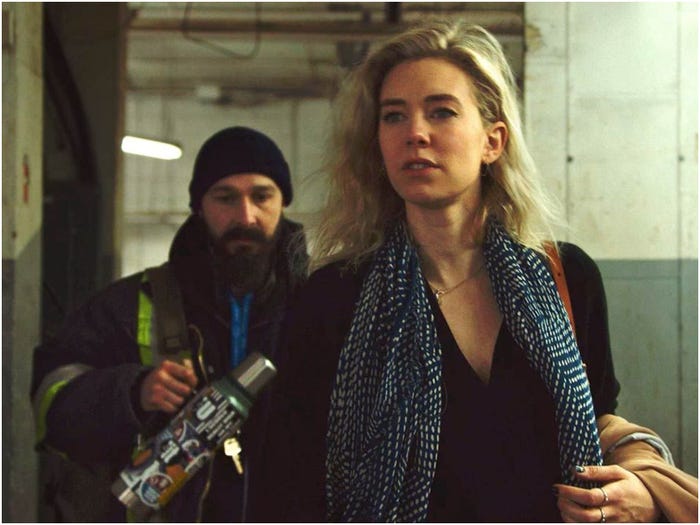 Netflix has removed all mentions of Shia LaBeouf from its For Your Consideration page, which lists the movies and TV shows being campaigned for awards this season, following FKA Twigs' lawsuit against the troubled actor.

LaBeouf stars in Netflix's "Pieces of a Woman" alongside Vanessa Kirby. The two play a married couple who suffer a terrible tragedy after a home birth ends in the loss of their child. LaBeouf was set to be campaigned for his supporting role in the movie, but, as first spotted by IndieWire, the actor is no longer mentioned in the film's synopsis and is not among the list of actors that Netflix is putting forward for awards.

The synopsis now reads: "Martha (Vanessa Kirby) and Sean are a Boston couple on the verge of parenthood whose lives change irrevocably when a home birth ends in unimaginable tragedy." LaBeouf plays Sean.

LaBeouf also doesn't feature in any of the images from the film on the page, although he is unavoidably present in the movie's trailer.

However, citing a source close to the movie, IndieWire reports that LaBeouf was not going to be campaigned for the movie in the first place.

The film could have been part of a continued renaissance for LaBeouf who has starred in several acclaimed movies of late including "The Peanut Butter Falcon" and the autobiographical "Honey Boy," which he wrote himself. However, FKA Twigs' accusations against the actor has altered that perception drastically.

On December 11, The New York Times published a report wherein FKA Twigs accused LaBeouf of physically and emotionally abusing her. She said that he grabbed her to the point of bruising, choked her, and forced her to sleep naked, while another ex-girlfriend of LaBeouf's, Karolyn Pho, alleged that the actor headbutted her and made her bleed.

LaBeouf told the New York Times that "not all of these allegations are true," although he did state that his ex-girlfriends deserved the right to air their criticisms of him and their experiences with him.

After the story broke, Sia tweeted that she, too, had been burned by LaBeouf, alleging that he "conned" her into a relationship after lying about his relationship status.

LaBeouf was heavily campaigned for "Honey Boy," which tells the true story of how LaBeouf suffered as a child actor with an abusive father, whom LaBeouf played.

The director of that movie, Alma Har'el recently said that she stands by FKA Twigs, who also starred in the movie. Har'el stated that LaBeouf's road to recovery does not excuse his abuse.

While LaBeouf could still theoretically get a nomination (and even a win) without being campaigned, it is highly unlikely.

Insider has reached out to Netflix and Shia LaBeouf for comment.