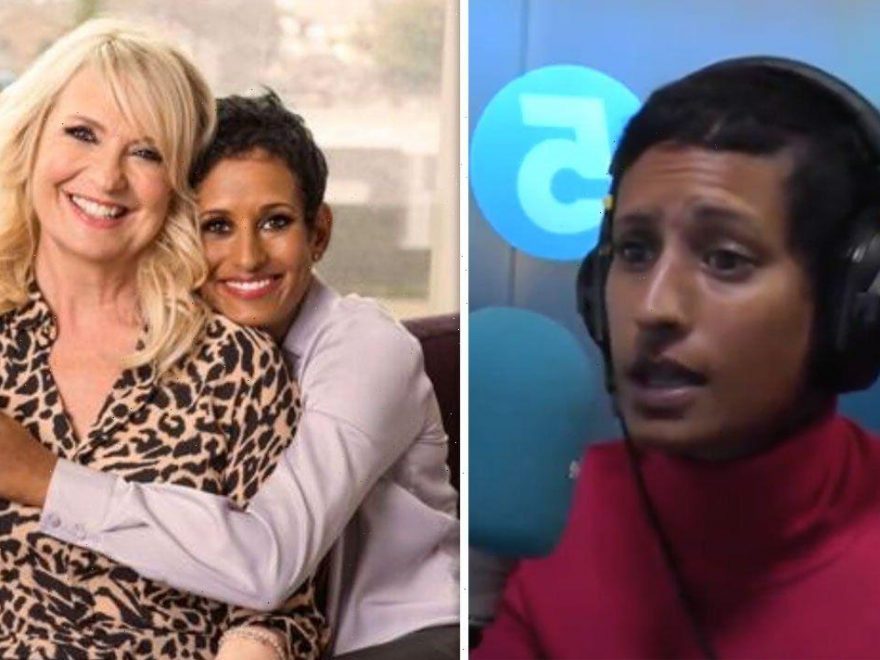 Naga Munchetty has been supported by her BBC Breakfast co-star Carol Kirkwood after sharing her experience with getting an IUD, a contraceptive device also known as the coil. As Naga said the agony was “traumatic” and hoped to initiate change, Carol sent her love on Twitter.

In a video on BBC Radio 5 Live’s account, Naga, 47, described how her “screams were so loud” her husband was rushing around the doctor’s, trying to work out which room she was in.

The powerful interview has now been nominated for an award, Naga explained on Twitter.

Quote-tweeting the video clip from June 2021, the journalist wrote: “This has been nominated for ‘Radio Times Moment Of The Year’.

“So proud of the work our @bbc5live team put into this important subject to be aired.”

To this, weathercaster Carol showed her support with a love heart emoji and kisses in the replies.

According to the NHS’ website, an IUD is a small T-shaped plastic and copper device that’s put into the womb by a doctor or nurse.

The device releases copper to prevent pregnancy, and is efficient for 5-10 years.

Introducing the topic, Naga explained some women feel that their pain is “something to endure, not a problem to solve”, particularly when it comes to gynaecological issues.

Naga recalled: “I had a coil fitted a few years ago, and it was one of the most traumatic physical experiences I’ve had.

“I’d gone through what the procedure involved with my GP and she was clear, patient, and informative, so I thought I was prepared for a routine procedure.

“A nurse accompanied the doctor in the room that the fitting was to take place and I’d been told to take a couple of paracetamol and ibuprofen in the hours before my appointment.”

Naga went on to explain that as she’s never been pregnant before, she had never experienced her cervix being opened, and the smallest size speculum was not big enough for the procedure, so they had to use the next size up.

She admitted her screams during the procedure were “so loud” that her husband was left horrified, as were those he was sitting with in the waiting room.

“He said that those in the waiting room hearing my screams looked horrified,” Naga revealed.

“The nurse accompanying the doctor had tears in her eyes. I was asked by my doctor half way through if I wanted to stop, but I was so determined that the pain I’d suffered so far wouldn’t be repeated, so I said, ‘we’ve got this far, let’s finish it’.

Naga explained that she had the coil removed after a year, and it was “excruciating”, leading to her fainting once again.

At no point was she offered any pain relief for the invasive procedure.

Adding that she knew women with similar experiences, Naga clarified she wanted her experience to help change the conversation about how we look at women’s health and pain.