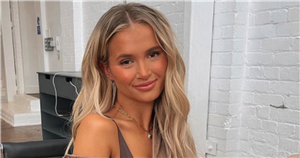 Molly-Mae Hague has set the record straight to her followers on Twitter after Jake Paul unveiled a DM he claimed he received from the Love Island star.

The 21 year old was caught in the middle of Jake's and her boyfriend Tommy Fury's feud on Thursday as the YouTuber shared a screenshot of a DM he claimed she sent on his Instagram story.

The message, which was said to be sent to Jake on October 15 in 2018, read: "Might be coming to America later this year and have always been a fan of your videos. Maybe you can show me around?"

In a video, he also gave a shoutout to Tommy, as he announced: "Oh, and one last thing Tommy.

"You should be more worried about your girl sliding into a bunch of dude's DMs than you should be fighting me."

Despite this claim, Molly-Mae turned to her Twitter to write: "Times must be hard when you’re having to fake a DM…. photoshop is scary."

It wasn't long before many of the star's followers waded in to reply with words of support.

"OMG, girl you ok? It’s awful when people do shit like that. They obviously have absolutely nothing better to do," one fan said.

Another fan noticed the YouTuber posted a white love heart emoji in the message, to which they tweeted: "Nice try @jakepaul. The white heart emoji wasn’t even out in 2018. Little drama queen."

"Keep your head up queen… DMs open if you ever wanna talk," a third supported Molly.

A fourth remarked: "jake paul is the definition of embarrassing," before another joked: "He wishes he had you in his Dms, what a sad little life Jane."

It comes after boxing star Tommy, 21, whose brother Tyson apologised to Molly-Mae Hague for ‘dragging’ him to US, posted a video where he mocked Jake on Twitter.

He put on a blonde wig and spoke with an American accent as he announced: "Sorry bro, I didn't see you there, I was too busy being a massive p***y."

The star then switched back to his British accent before adding: "Jesus Christ, I don't know how you take yourself seriously looking like this, my god.

"I put it on a plate for you, I asked you if you want to fight and you decided to laugh it off, as per usual."

He finished: "Stick to your little YouTube videos behind your little desk and don't come over to this boxing world cause you'll get laid out in 30 seconds flat."