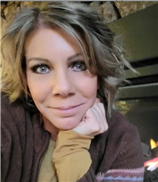 Meri Brown knows she cannot turn to her spiritual husband any longer.

On numerous occasions, Kody Brown has made it clear that he doesn’t speak to Meri everyday and that the so-called spouses are just friends at this point.

Meri has found someone far more reliable to whom she can turn — any time, any place, for any reason.

Late last month, Meri returned from what she described as a “fulfilling, relaxing, invigorating, rejuvenating” vacation, writing on Instagram:

“I’m learning that as I surrender my hopes and dreams to God and the universe, and as I move forward with intention, doing the work that needs to be done, that the doors will continue to open.”

Fast forward to this past Monday and Brown went into even more detail about the influence a certain higher power now has on her life.

“I was called to love, not to hate,” she wrote as a caption to the first photo above.

“I’m here to love, to learn, to serve, to impact others in a positive way. I am not here to judge, to correct, to hold accountable, anyone but myself.”

Meri, of course, has made headlines over the past year or so for the sad state of her marriage.

TLC viewers have consistently wondered why the 51-year remains with Kody in the face how he treats her; blaming her for the state of their relationship, claiming she tried to cheat on him a few years ago and refusing to sleep with her.

Indeed, Kody has said their sexual relationship is long over.

And yet: Here Meri remains.

“I’m here to be a safe place, to have an open mind, heart, and home, and to make others feel loved and cared about,” Brown continued in her latest caption.

“I am here to laugh, to enjoy life, and live it to it’s [sic] fullest.

“I fiercely love and protect those in my inner circle, and that circle is far reaching.

“My calling, my job here on this earth, is to live a life of passion, of confidence, of authenticity, true to who I am, and true to who God made me to be. I am unapologetically me.”

Alongside the message, Meri included the phrases “Living My Why,” “Because I Can,” “Love What I Do” and “Love Who I Am” in hashtag form.

Meri and Kody got married in 1990 and then got divorced two decades later so that Kody could marry another woman, Robyn, and legally adopt her kids from a previous relationship.

Meri’s romance with Kody then truly shifted after she got entangled in a catfish situation in 2015… developing a connection with a woman disguised as a male admirer on the Internet.

Kody addressed where the non-couple stands during the season 16 tell-all special in February, saying he doesn’t “feel safe” with Meri.

“There’s a point where intimacy is just damaged. It’s misleading to have intimacy in a relationship where there is no real safety, I’m not going there,” said Kody.

“I never will [feel safe] again. I will be her friend, I will do what I can to protect her.

“I will build a house for her out on Coyote pass.

“But I’m never going to feel safe in an intimate place.”

Just consider her perspective after coming back from the aforementioned vacation:

“It’s interesting and revealing on days and weekends like these, what your heart amd mind can let go of, and at the same time, what can fill you up, and the inspiration you can have for your future.

“Coming home with a mind a little more clear, a heart a little more at peace, excitement about my plans and dreams ahead of me, and ready for the doors that I’m positive will open up for me.”