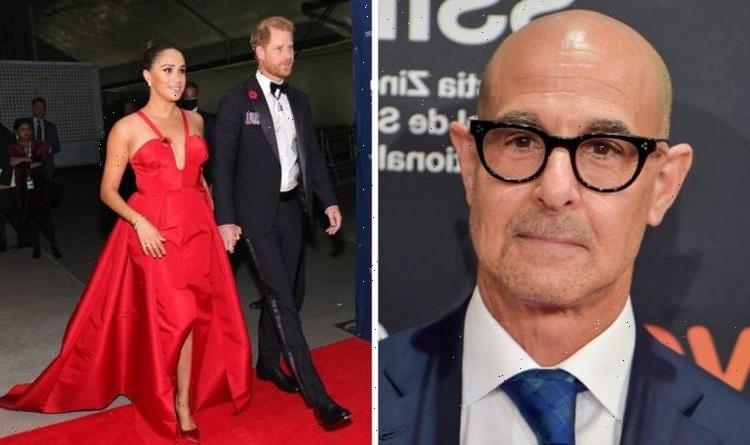 Stanley Tucci stars on our TV screens this weekend, as he makes two appearances in a matter of hours. First, he appears on The Graham Norton Show alongside Dame Joan Collins, Jamie Oliver, Romesh Ranganathan and singer-songwriter Joy Crookes. The Golden Globe winning actor will also appear on Saturday Kitchen the following morning, joining Matt Tebbutt and chefs Gennaro Contaldo and Angela Hartlett.

The American actor, writer and producer has recently released his new book ‘My Life Through Food’, an intimate and charming memoir of his life in and out of the kitchen.

Having grown up in an Italian-American family, he spent every night around the kitchen table.

He shared the secret behind some of those meals in previous books ‘The Tucci Cookbook’ and ‘The Tucci Table’, and now takes readers beyond the recipes and offers a fascinating insight into the stories behind them with his latest book.

Filled with numerous anecdotes about his childhood in Westchester, New York, falling in love over dinner, and teaming up with his wife to create conversation-starting meals for their children, readers follow Mr Tucci’s heartfelt journey right up to the present day.

Mr Tucci, 60, rubs shoulders with Hollywood A-listers on a daily basis, having starred in the likes of ‘Captain America: The First Avenger’ and ‘The Hunger Games’.

He has also received major accolades for his television work, including ‘Monk’ and the 2021 series ‘Stanley Tucci: Searching for Italy’ — which beat Meghan Markle and Prince Harry’s explosive Oprah Winfrey interview to win an Emmy award in September.

Mr Tucci reportedly enjoyed a wild weekend with Meghan and Harry in the Netherlands in 2018.

The Evening Standard reported in September 2018 that the couple headed to Amsterdam for a three-day party to celebrate the launch of exclusive private members’ club Soho House’s outpost in the Dutch capital.

The refurbished art deco building has 79 bedrooms, a rooftop pool, a restaurant, a spa and yoga studios.

According to a 2018 report in the Wall Street Journal, the Soho House membership admission process requires a lengthy application and interview process, with more than 27,000 people on the waiting list. Membership is not solely based on wealth and family status, the report said.

Others in attendance were Michael McIntyre, Fran Cutler and Nick Grimshaw.

The report claimed guests were promised a long weekend of “eating, drinking, napping, dancing, boats and bikes” — and certainly were not left disappointed.

They toasted founder Nick Jones’ 55th birthday, as well as the opening of the building, with a Saturday night feast and a lavish Sunday brunch.

Guests received a walking tour of the red-light district on the Friday night and a boat trip down Amsterdam’s famous canals the next day.

Meghan and Harry reportedly skipped both, declining the boat trip for security reasons as they did not want to be photographed.

The Sussexes were big fans of Soho House, and had their second date there several years ago. Royal expert Katie Nicholl revealed in her book ‘Meghan and Harry: Life, loss and love’ that a mutual friend arranged for them to have a “discreet table”.

Ms Nicholl wrote: “Because there is a no cameras policy, the couple enjoyed a relaxed date without the worry of being photographed.

“Over a bottle of chilled rosé they chatted for hours confirming to Harry that he had indeed met someone special.”

The strict no-picture and mobile phone policy applies at all of the Soho House branches, allowing Meghan and Harry to enjoy a low-profile weekend in Amsterdam.

According to The Mirror, Meghan sipped red wine on the Saturday evening, while Harry enjoyed vodka cocktails.

A waitress told the Daily Mail: “I was so shocked to see them there. They were like any other couple.

“They ordered food from the normal menu guests order from.”

The couple left Amsterdam on the Sunday morning ahead of a royal engagement at Loughborough University the following day, where they presented numerous sporting awards.

Stanley Tucci stars on The Graham Norton Show on BBC One at 10:35pm on Friday, and Saturday Kitchen at 10am the following morning on the same channel.