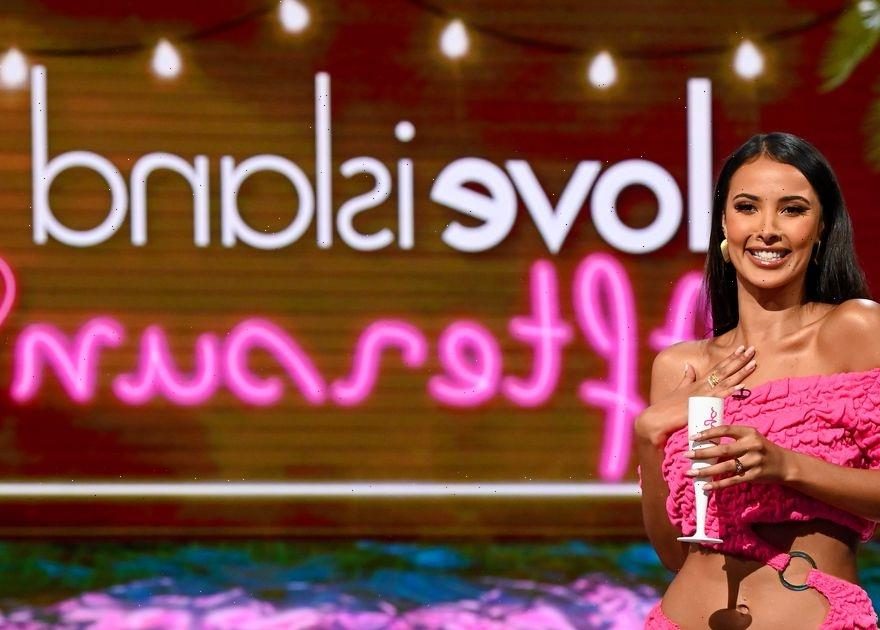 Maya Jama has won the praises of viewers across the UK once again as she made her Love Island Aftersun debut on Sunday 22 January.

The 28 year old, who took over presenting the hit ITV dating programme from Laura Whitmore, walked onto her stage in a stunning bright neon pink off the shoulder cut-out dress.

The ruffled number, which she paired with some matching strappy heels, showed off her rock hard abs and toned figure. Styling her mane straight down, she tucked loose strands behind her ear to ensure the focus was on her outfit.

With a smokey eye and a nude lip, Maya sipped on a glass of bubbly as she spoke to last year's finalist couple Tasha Ghouri, 23, and her boyfriend Andrew Le Page, 27. Tanyel Revan's mum and sister also sat on the sofa to talk about the 26 year old love life in the villa after she recoupled with Ron Hall, 25.

And Tanyel Revan's mum and sister sat on the sofa to discuss the star's shock romance with Ron inside the villa. Meanwhile, the live audience included a panel of Jordan North, 32, Sam Thompson, 30, and ex Islander Indiyah Polack, 23.

Fans of the programme immediately flocked to Twitter to gush over Maya as one person wrote: "The way Maya Jama understands the assignment & adding Indiyah & Sam to the mix who have great chemistry with each other Aftersun has actually been enjoyable #LoveIsland".

"@MayaJama has made #loveisland #Aftersun enjoyable again," another shared as a third chimed: "Already this aftersun is a hundred times better than every episode last season. It felt like nobody wanted to say it like it is. Indiyah and Maya are keeping it real and saying what we think, thank GOD."

A fourth shared: "This after sun is already got me paying attention when usually I hear it as background noise. Must be Maya and Indiyah".

While a fifth added: "I love Maya Jama hosting, she has so much chemistry with the audience, panel and islanders, she’s killing it #loveisland #loveislandaftersun".

Maya has been given 50 per cent more airtime than the previous host of the programme, Laura, it appears.

In the first four episodes of the latest series, the star has been on our screens for a total of 19 minutes and 55 seconds. That's six minutes and 29 seconds more than her predecessor.

It's also 6.9 per cent of the total airtime so far. By the same point, long-running host Laura had only racked up 4.6 per cent.

Ever since the late Caroline Flack presented her first series, fans of the hit dating show have always kept track of the host's screen time.

A TV source told The Sun: “For whatever reason, viewers always note how often Love Island’s host appears and for how long.

“Laura really came under scrutiny because during the first four weeks of series eight last year, she only featured for that 13 minutes.

“Of course, it remains to be seen how often producers will call on Maya, but so far viewers seem thrilled by the extra airtime for the host.”