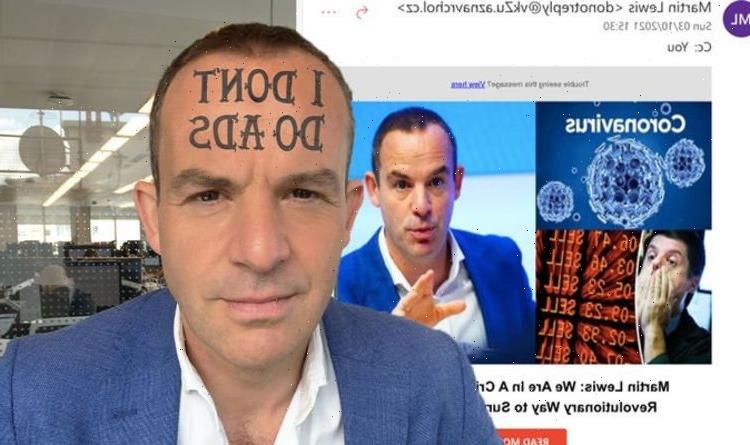 Martin Lewis, 49, has voiced his opinion on Twitter to his 1.2 million followers about online fraudsters. This comes after one of his followers alerted him of a new scam email going around that was using his face.

Twitter user Stuffers tweeted a screenshot of an email she had received that included Martin Lewis’ face.

The email caption said: “Martin Lewis: We are in crisis. Follow this revolutionary way to survive financially.”

After seeing this Stuffers tweeted the image to Martin along with a message to the Money Saving Expert.

She said: “Hey, @MartinSLewis someone is using your image again.”

Martin saw the image and replied hastily in anger about his image being used again.

Martin added: “Yet the government doesn’t think it worth putting scam ads in the new Online Safety Bill.

Fans were quick to comment about situations they have had in the past with individuals scamming them using Martin’s identity.

Bairey89 said: “I had a so-called energy consultant who phoned me saying that he was part of your team.

“My second word was off before I put the phone down.”

Envisage added: “We had one on the doorstep a few weeks back.

“‘Hello I’m from Money Saving Expert’. This was to my daughter who works in a bank’s fraud department.”

Martin, a financial journalist, founded the website MoneySavingExpert.com and regularly features on This Morning and Good Morning Britain to discuss financial savings.

He was met with such success that he started broadcasting his own show from 2012 on ITV called The Martin Lewis Money Show.

For the first six series, the star’s co-presenter was Saira Khan, with Angellica Bell co-hosting since 2017.

The show recieves between three to four million viewers an episode, and most weeks heads the top 10 current affairs shows in Broadcast magazine.

You can watch The Martin Lewis Money Show Live on Thursdays at 8.30pm on ITV