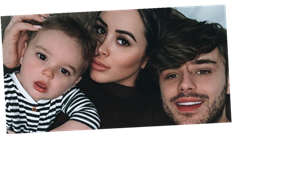 Marine Simpson has appeared to hint she and Casey Johnson are back together after she sparked speculation they had split earlier this week.

Former Geordie Shore star Marnie, 28, shared her excitement at viewing what could be her and 25 year old Union J star Casey’s new home on an Instagram story video, despite hinting she and one year old Rox would be moving alone earlier this week.

Speaking in the clip, Marnie, who has son Rox with Casey, said: “Me and Casey are viewing our first house tomorrow, which I’m so excited about. Can’t wait.”

She continued: “Like, obviously, it’s really exciting because I’d already bought this house before I met Casey so, the is gonna be really special because we’re gonna be buying together.”

In another clip Marnie continued to share her excitement as she said: “This is gonna be so special because it’s gonna be mine and Casey’s first home that we’re gonna be buying together.

“It isn’t the same, is it? So I’m just so excited to just buy a house together. We’re gonna get to do it up and design it and just, yeah. Obviously I already lived here when I met Casey.”

Marnie’s latest clip appears to solidify her hints that she and Casey reconciled after she sparked speculation that the engaged couple had split earlier this week.

Hours before gushing over the house move, Marnie shared a snap of the couple hugging on Instagram Stories, writing alongside: “Never let the sadness of your troubles and the fear of your future ruin what you have!

“Be strong, fight your battles no matter how hard they are, and if you push your loved ones away in dispair the ones who truly love you will always choose to stay no matter what.” [sic]

But, the pair are still not following one another on Instagram and their names are still removed from one another’s bios on the platform.

Marnie, who recently said all she needs is son Rox, sparked concern her and Casey’s romance was over earlier this week as she posted an image of a pink and purple sky on her Instagram page.

On top of the image were the words: “To new beginnings”. And, as she shared the quote with her four million followers, she hinted she and baby son Rox would be moving home as she added emojis of two people followed by a house in the caption.

Puzzled fans quickly picked up on the cryptic hint in the comments as one said: “2 days ago casey posted a pic of her saying my amazing wife to be…”

As another said: “According to her stories she said she “can’t believe she’s doing it by herself.” Sending good vibes”.

While another picked up on the fact that Marnie and Casey are not following one another on Instagram as they said: “Wait , why is it just [girl emoji] [boy emoji] ??? They not following each other ……”

Marnie continued to share more cryptic quotes on her Instagram stories, including one which read: “If life can remove someone you never thought of losing, it can replace with someone you never dreamt of having”.

Another thought-provoking quote posted on her Instagram story read: “One day you will tell your story of how you overcame what you went through and it will be someone else’s survival guide.”

Marnie's and Casey's representatives declined to comment when contacted by OK! online at the time.