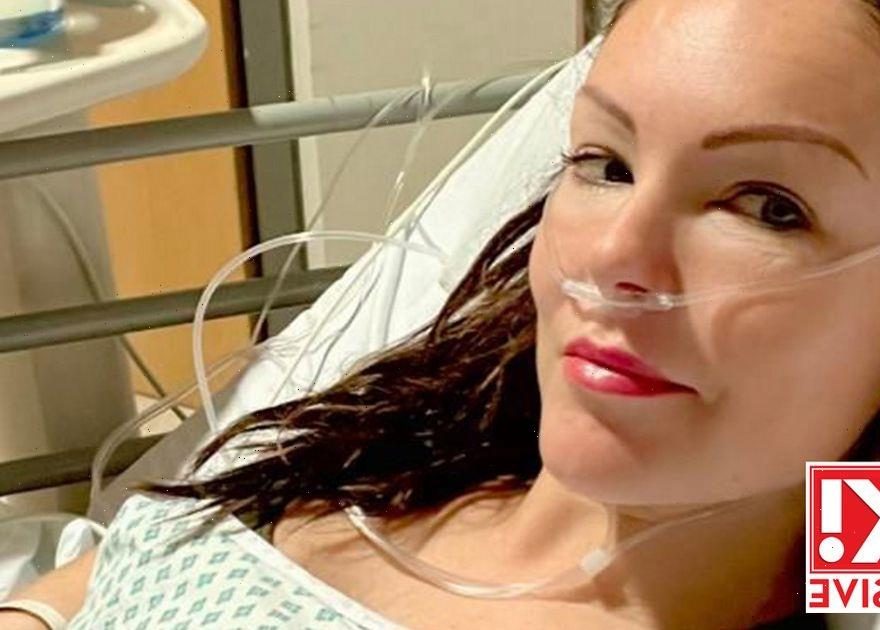 Marilyse Corrigan was met with floods of praise when she exclusively revealed to OK! her plans to donate her kidney to her ex-partner Shaun Bell.

The Married At First Sight star went under the knife in November and has been recovering after taking part in a kidney sharing scheme – which saw her give a kidney to a woman in need while her ex Shaun received a kidney from a male match.

Marilyse's ex Shaun, whom she shares her two sons Callum and Josh with, is now in better health and their children are looking forward to a Christmas with their happier, healthier dad.

Now, Marilyse has shared her own kidney with OK! in her own words…

I was a 20-year-old sales assistant when I first started working for a local jeweller, Shaun Bell. He was handsome and his dry sense of humour drew me in. Our sons Callum, now 16, and Josh, 13, made us a happy family of four. Although we were engaged, we never got round to getting married.

Shaun had already been diagnosed with polycystic kidneys – when cysts develop on your kidneys – but it didn’t seem to be an issue. His mum had the same genetic condition but lived a normal life. Shaun went for yearly check-ups and one time he rang from the hospital.

“One day, I think I’m going to need a kidney transplant,” he warned me. I didn’t fully take it in, but I said to him, “Well, if ever that was the case, obviously I would get tested.”

Then we pushed it to the back of our minds.

While Shaun worked hard, I raised the boys, but we drifted apart and found ourselves living separate lives.

So much so that by 2012, the relationship was over. Shaun moved out of the family home in Beverley, East Yorkshire, but remained a fantastic dad, having the kids on Wednesday nights and alternate weekends.

Over time, Shaun’s health deteriorated. His kidney check-ups showed their functioning was steadily decreasing. Then, in 2019, he was given bad news by the doctor. “Your kidneys are totally gone now. You need to go on dialysis.”

It was tough. His face was grey and he’d begun urinating blood. We explained to the kids – then 14 and 11 – that when they were staying with Dad they’d see him in bed on a machine every night doing his dialysis.

Of course, they were upset. It was awful having them coming home saying, “We’ve been helping Dad move the boxes of fluids for the machine from the van to his bedside.”

They were always worried about him and they’d cry, which broke my heart. Shaun was put on the waiting list for a kidney donation. His dad was too old, but his auntie and sister went for tests to see whether they’d be suitable for donation – but unfortunately they weren’t.

One time, I found Josh anxiously googling on his phone to see whether he was old enough to give his dad a kidney. I knew I had to do something. I couldn’t sit back and watch.

I’d lost my own dad to cancer when I was 16 and I didn’t want my boys suffering the same fate of losing a parent so young.

So in September 2019, I put myself forward for tests to see if I could be a match.

The hospital sent me all the information, a DVD to watch and paperwork to fill in.

I knew I needed to tell Shaun my plans, so when he came to collect the kids one evening, just as he was leaving, I ran out to the car and handed him a hospital letter saying I was going for the tests. He’s not normally emotional, but the kids said he drove away in tears that night.

The process then quickly kicked into action. I had CT scans, blood tests, a chest X-ray and a kidney scan – to check both kidneys to begin with and see what my functionality was.

I was worried I might need to keep one for the kids – but the doctors explained it wasn’t possible to test them for anything genetic for many years and that I’d be too old by then anyway to be their donor.

As a personal trainer I knew I was fit and after a few weeks I got the results back confirming I was healthy enough to donate.

I met the surgeon who explained that I could donate one of my kidneys, but I wouldn’t be able to give it directly to Shaun because his body is bigger than mine. Instead, they suggested the kidney sharing scheme, which allows one person to donate to a loved one and swap with somebody else doing the same thing.

I felt I would recover well from the op and although I liked my tummy, I figured having a small 7cm scar was a small price to pay for the kids keeping their dad.

And then Covid-19 hit and everything was put on hold.

During the pandemic Shaun was deemed high risk so he had to isolate. I looked after the kids and they’d wave at him through the window. It was so hard.

It was during that time that a client told me about a TV show, Married At First Sight. I binge-watched the whole of the Australian series in one night and when I saw an ad at the end for the UK version I applied. Why not? I needed some fun.

Amazingly, I was picked. But I made it clear to the producers that if the hospital rang to say they’d found a match for Shaun or if operations began running again, I’d drop everything.

They were understanding and I had a great time filming it – although I’m still single!

Then, two months ago, I finally got the phone call from Leeds hospital.

“We’ve got Shaun a match,” they said. It was the news we’d all waited so long for.

October was a terrible month – both my auntie and my stepfather died suddenly, so my mum was terrified of me having the op.

I was also worried the boys would be scared of having both their parents in hospital. But I’d come this far and knew what was at stake.

So on 9 November, Callum’s 16th birthday, both Shaun and I were admitted to different wards at the same hospital for our operations.

The kids gave us big hugs and kept saying how much they loved us on the family WhatsApp group.

After a three-hour procedure to remove my left kidney, I was dehydrated and tender but happy it had gone smoothly. Shaun’s operation wasn’t until 7pm that night.

The next day the doctors said I could go home. But beforehand, I wanted to see Shaun. In a wheelchair, they took me to his building and instantly he looked so much better – with colour back in his face, the old Shaun was back. The kids still had a dad.

Back home the boys made such a fuss, fetching me drinks and hot water bottles while I recovered. Five days later, Shaun was allowed out.

Now his kidney function is working even better than it was on dialysis. He’s not a man of many words, but he wrote me a lovely message saying how much what I’d done means to him. We may not be together but we’ll always have a special bond.

It’s still early days, but I like to imagine it’s probably the best Christmas present Shaun and the boys have ever had. And if the boys are happy then so am I.

For all the latest news and exclusive interviews with your favourite stars including Marilyse, sign up to our daily newsletter here