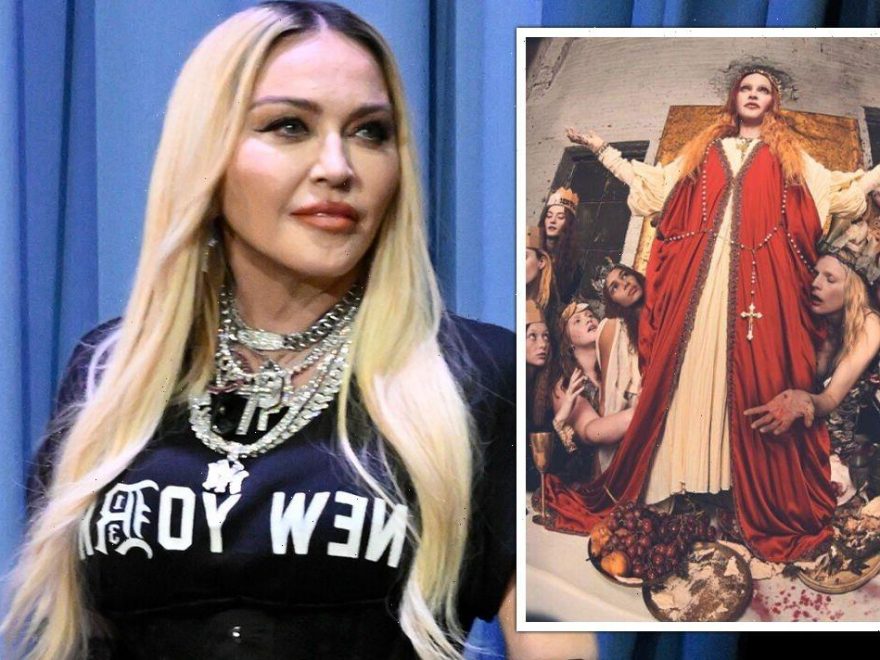 Legendary singer Madonna, 64, is the new subject for Vanity Fair’s icon issue, however, her photoshoot for the magazine has sparked some backlash. Some of the released photos show her seemingly resembling the Virgin Mary and Jesus Christ at the Last Supper.

The icon issue of Vanity Fair is not only notable for the legendary singer gracing its cover, but also as it is a collaboration with the French, Italian and Spanish editions of the publication.

Critics blasted the images, slamming them as “offensive”, “disrespectful” and outright “blasphemy”.

One photo showed the singer dressed in a cream garment with red robes and a large beaded rosary.

The Like A Prayer singer stood on a table with her hands outstretched to the side as 12 people surrounded her.

The image also depicted a flaming heart stabbed with seven swords, which many assumed was alluding to the religious imagery, the Pierced Heart of the Blessed Virgin.

Although there were other images from the photoshoot which seemingly didn’t refer to religion at all, some blasted the project as a whole.

One Twitter user quoted the Bible, Galatians 6:7, adding: “God will not be mocked.

“Beware Madonna, Vanity Fair and the lot of you. It’s disgraceful and sad that you think you can get away this blasphemy.”

However, others praised the creative angle the magazine had taken, adding that the singer “devoured” the photoshoot making them “obsessed”.

The singer is not unfamiliar with controversy and has experienced a few run-ins with religious groups before.

Her 1989 single Like A Prayer also prompted some backlash for its own religious inference.

Even over the last Christmas season Madonna came under fire after she posted some family photos featuring her 10-year-old twins in corsets and high heels.

Madonna is set to embark on her Celebration tour this year which will reportedly feature music from all four of her decades as a musician.

In her exclusive interview with Vanity Fair for their icon issue, Madonna confirmed she is currently preparing for the upcoming tour.

On New Year’s Day, Madonna reflected on how much she has done in her life and career, emphasising that she never would have thought it would be like this.

Posting some celebratory snaps on Twitter, the singer shared her favourite quote from The Impossible Lives of Greta Wells: “When you were a little girl Madame, was this the woman you dreamed of becoming?”

The Material Girl hitmaker answered for herself: “I could never have imagined my life would be so full…

“That I would be able to make a living being an artist. That I could be the mother I never had.

“That my children would bring me so much joy!! More Importantly that I would be in a position to be able to help others less fortunate then myself…

“Happy New Year from the Warm heart of Africa.”

The icon issue of Vanity Fair Italy is out now. The edition for Vanity Fair Spain and France will be out on January 25.