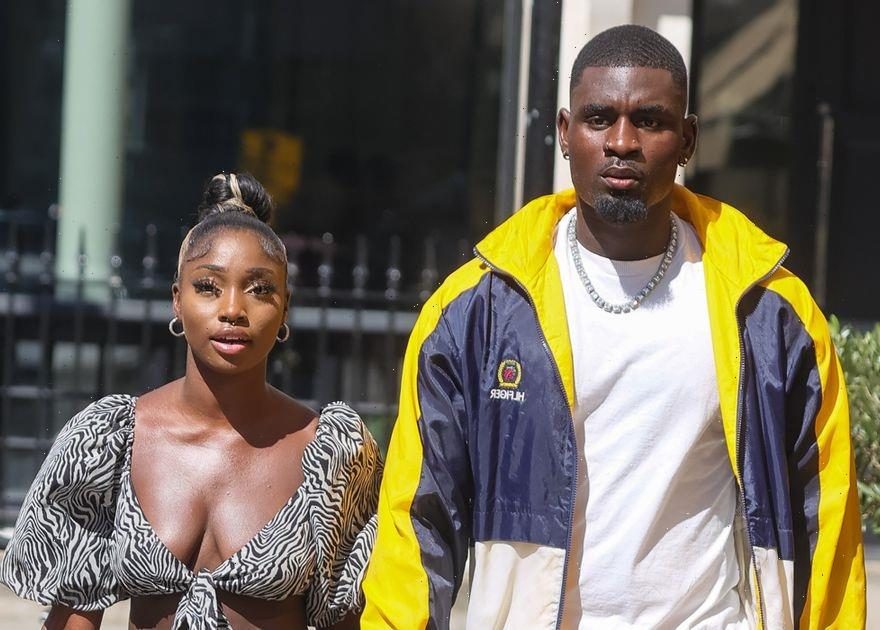 Indiyah Polack has been spotted out with her Love Island beau Dami Hope, days after he defended the outfit she wore to meet his grandmother.

Pictured leaving the Under the Duvet podcast studio in London, the Love Island pair walked hand-in-hand before sipping on a Prosecco in Soho.

Indiyah, 23, looked glamorous as ever in a zebra print tied crop top with puffed sleeves and grey leggings, with black heels.

Her Irish-beau looked slightly serious, dressed in all white with a Tommy Hilfiger blue and yellow casual jacket.

Indiyah recently attracted attention after some fans thought she wore a controversial T-shirt when meeting Dami’s grandma for the first time.

The Islander, who finished in third place alongside Dami in the recent series of the hit ITV show, wore a white cropped T-shirt that showed a pair of nude breasts connected with a silver nipple chain in faded grayscale across the front.

Fans were quick to address the fashion choice, with one writing “no way indiyah went to meet his grandma in that top” and another writing: “Loveeee indiyah but the top to meet the gran?? Huhhh”.

Dami was quick to defend his girl though. Addressing the top on social media he said: “Stop coming at my girl, because I told her to wear this, this spectacular top.”

As Indiyah laughed, she explained that she chose the top after Dami lost his nipple ring.

“My grandmother loves it so, we don’t care,” ended Dami. Now fans seem to have changed their tune and the top has since sold out. One fan wrote: “I really want that t*tty top Indiyah had on,” and another wrote: “All of this ‘concern’ for us to even find out Dami picked out the top for Indiyah himself loooooooool”.

The 26-year-old from Dublin posted a heart-warming video of Indiyah meeting his grandma for the first time as they shared a long hug. He wrote: “They’re still hugging 30 secs after I posted this.”

He also joked that his grandma changed her outfit and put perfume on in preparation for meeting Indiyah.

The couple officially became boyfriend and girlfriend during their time in the villa, making it to the final and finishing behindGemma OwenandLuca Bishand winnersDavide SanclimentiandEkin-Su Cülcüloğlu .

Despite a slightly unsteady start to their time in the villa – Dami was originally coupled up with Amber Beckford and Indiyah with Ikenna Ekwonna – the pair soon found each other and their romance is continuing to blossom.

Speaking on the reunion show, Indiyah revealed that she knew Dami was a “bit of me” when he walked into the villa and she noticed his nipple piercing.