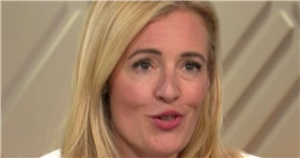 The 44 year old is serving as a replacement host this week on the popular ITV daytime talk show, however, her appearance doesn't seem to be winning over many fans.

From celebrity interviews to fashion segments, Cat, who has spent a majority of her presenting career Stateside, spent the episode in high spirits and giggling away.

But fans of the show took aim of the TV personality's bubbly presenting style, with one frustrated person tweeting: "Enough of the fake laughing now #Lorraine."

Another person echoed: "It's not even funny #Lorraine."

A third commented: "Oh Cat that constant 'Fake' Laugh is Painfully obvious…!!! (Must have been watching a video of Lorraine to impersonate..)"

Meanwhile, a fourth noted: "Why does Cat Deeley present with such a baby voice?? She knows viewers aren't three years old, right? #Lorraine."

However, others welcomed Cat as a temporary replacement for Lorraine.

One person wrote: "What a refreshing change again to have Cat Deeley, give her a show of her own or at the very least 2 days a week instead of the same old same old every day."

Another added: "Yay, so much better than Lorraine. YIPEE."

Cat, who also briefly took over Lorraine's hosting duties back in April, has returned to our screens after 14 years of hosting shows in LA and fans have been loving her.

The blonde is married to successful comedian and fellow presenter Patrick Kielty. He tied the knot with Cat, 44, in a private ceremony in Rome in September 2012.

The pair had been friends for years and met while presenting pop reality show Fame Academy in 2002.

Patrick and Cat welcomed the first child Milo, five, in January 2016 and welcomed their second son, two, James in June 2018