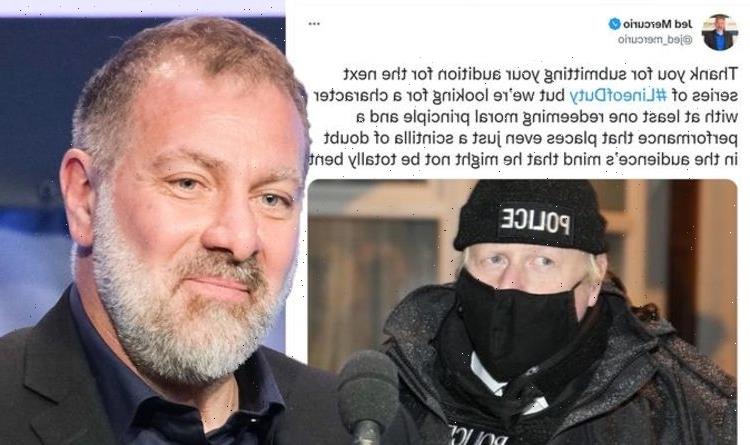 Line of Duty’s Jed Mercurio is quizzed on NEW SERIES

Jed Mercurio, 55, the creator of BBC hit drama Line of Duty has taken to Twitter to savage Boris Johnson, 57, after he was seen in a police uniform today. Jed took to Twitter to poke fun at the Prime Minister, and rejected his “audition for Line of Duty”.

hank you for submitting your audition.

Boris was seen donning a police vest, coat and hat as he observed an early morning raid on a home in Liverpool.

Jed took to Twitter to joke that his appearance could have served as an audition for his BBC drama Line of Duty, a show that explores police corruption in the force.

In view of his 203,600 followers, Jed posted the picture of Boris along with the caption: “Thank you for submitting your audition for the next series of #LineofDuty but we’re looking for a character with at least one redeeming moral principle and a performance that places even just a scintilla of doubt in the audience’s mind that he might not be totally bent.”

Many took to the comments to laugh at Jed’s hilarious rejection of the Prime Minister.

PaulCulshaw1983 added: “I know that’s not really the main point of this but I’m just glad that you just implied/confirmed there will be ANOTHER series of #LineofDuty to be honest.”

Kingkennyl commented: “And the tweet of the year award goes to Jed.”

Jed seeming referenced Boris in the past, with many fans believing that the line of Duty character DSU Ian Buckells was being likened to the Tory Leader.

The officer, played by Nigel Boyle, was unmasked as the so-called ‘Fourth Man’ in the series six finale.

This tied-up a long-running hunt for a high-ranking cop heading up a network of corrupt officers in league with organised crime.

During Buckells’ interrogation, Superintendent Ted Hastings said that Buckells had “fallen upwards” in the police ranks, with his corruption “mistaken for incompetence”.

Many thought that creator Jed was drawing parallels to the Prime Minister, with former Labour communications director Alastair Campbell tweeting about it at the time.

He penned on May 2: “‘How some people can fail upwards beggars belief’ – the best @jed_mercurio troll of @BorisJohnson yet #LineofDuty.”

Boris is under growing pressure currently to explain what happened in Downing Street last year when a Christmas party was said to have been held during coronavirus restrictions.

The Metropolitan Police has said it was considering complaints submitted by two Labour MPs.

The prime minister was in Liverpool to launch a new 10-year drugs strategy for England and Wales, with government officials likely hoping that a week of announcements on the issue would take the pressure off suggestions the party at No 10 broke Covid rules.

Boris’ announcements include a pledge to break up 2000 “county lines” drug gangs in order to rid the country’s streets of illegal narcotics.

The PM even took to Twitter himself to post a picture of himself in action today, in view of his 3.7 million followers.

He captioned the image: “We’re getting tougher on crime to provide the safety, security and support that communities need to level up.”