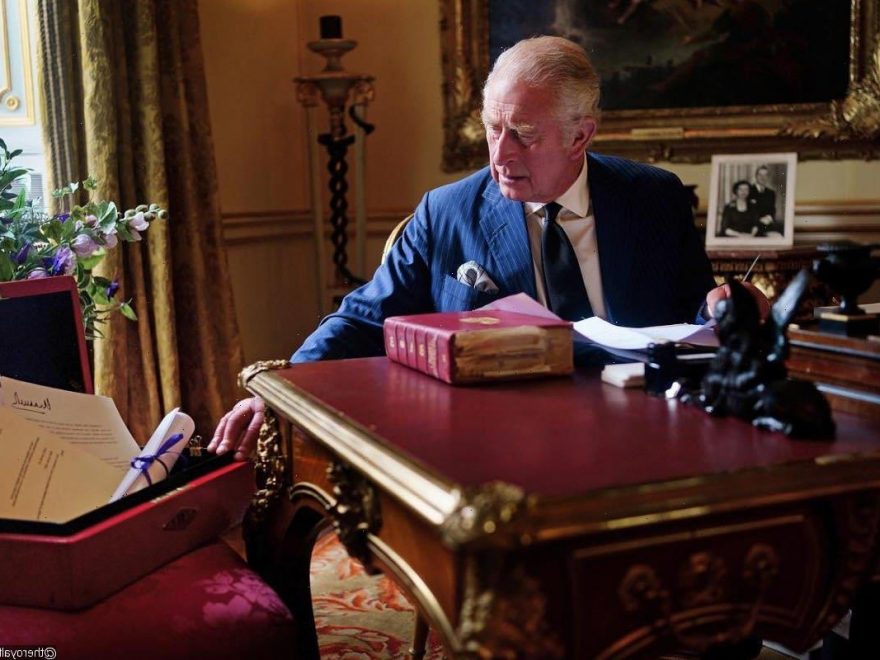 In a new picture of King Charles III, the new monarch of Britain is seen conducting official government duties at the Eighteenth Century Room in Buckingham Palace.

AceShowbiz -King Charles has been pictured working from the famous red box for the first time. In a new picture, the new monarch, whose late mom Queen Elizabeth received one of the iconic containers every day of her reign, including weekends, was seen conducting official government duties at the Eighteenth Century Room in Buckingham Palace.

Christmas Day was the only time his late mother did not have a similar red box handed to her. They contain documentation from government ministers in Britain, along with papers from Commonwealth authorities. The image of Charles at work, which was taken by Victoria Jones from the Press Association, was released on Friday night, September 24. It was, however, captured on September 11, days after the Queen’s death on September 8 aged 96 at her beloved Balmoral estate.

When the Queen reached her record 70 years on the throne earlier this year, Buckingham Palace released a similar image of her sitting with her red box, taken in the saloon of Sandringham House, where she traditionally spent the anniversary as it is where her father died. Charles is seen in the image sitting at a gilded desk, reaching toward papers including one tied with a ribbon, while in the background sits a framed black and white photo of his parents.

British leather firm Barrow Hepburn and Gale had previously confirmed boxes for Charles were in production, with a spokesman for the company saying the king would initially receive more than six boxes which would all carry the new royal cypher. Every box has its own coded lock and it is thought they are red as the shade was a favourite of Prince Albert, consort to Queen Victoria.

Others believe the reason stretches back to the late 16th century, when Queen Elizabeth I’s representative Francis Throckmorton presented the Spanish ambassador Bernardino de Mendoza with a red briefcase filled with black puddings. The king is now thought to be staying at his home in Birkhall, Scotland, to start his new work and privately mourn his “darling Mama” after 10 days of national mourning in the UK and public appearances by the royals, including official visits to Scotland, Wales and Northern Ireland by Charles. He said before the Queen’s state funeral on September 19 he hoped “flights of angels” would “sing thee to thy rest”.