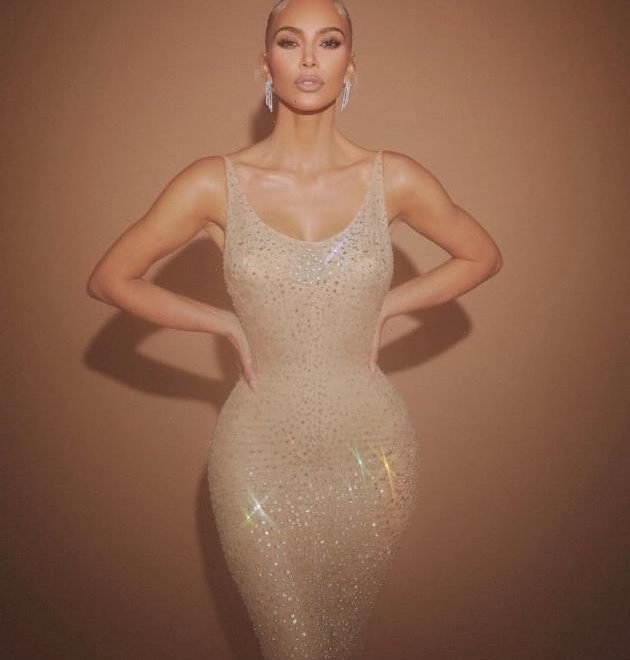 The Met Gala is always chock full of wild fashion statements, but at this year’s event, Kim Kardashian outdid her flashier rivals with a surprisingly understated look.

At first glance, there was nothing particularly memorable about Kim’s dress.

She looked gorgeous, of course, but she always does — and by Met Gala standards, the outfit was almost low-key.

But once you know the story behind Kim’s latest fashion stunt, it’s impossible not to be floored by one of the most audacious Met looks in recent memory.

The gown was given to Kim on loan from the Orlando Ripley’s Believe It or Not Museum, an organization that’s not exactly in the habit of clothing celebrities.

The dress was originally worn by Marilyn Monroe on the night that she famously serenaded President John F. Kennedy on the occasion of his 45th birthday.

It’s an iconic moment in the history of American pop culture, one that’s been parodied and played for laughs countless times in film and television.

But as many have pointed out on social media today, the circumstances surrounding that iconic moment were much more sad than funny.

At the time, Marilyn was carrying on affairs with both JFK and his brother and attorney general, Robert Kennedy.

Within three months of her performance, Monroe would be dead from an overdose that may have been intentional.

Whatever the case, many of who were those closest to the screen icon have long maintained that the Kennedys played a role in her death, whether indirectly or otherwise.

Her simultaneous affairs with two of the world’s most powerful men reportedly took a tremendous emotional toll on Marilyn.

For decades, it’s been rumored that JFK was so embarrassed by Monroe’s sultry performance at his birthday celebration that he ended his relationship with the actress and encouraged his brother to do the same.

While those reports remain unconfirmed, a new Netflix documentary alleges that RFK was in Los Angeles on the day of Marilyn’s death and contacted her just hours before her overdose.

The details of their conversation are lost to history, but many attribute the subsequent efforts to cover up the circumstances of Monroe’s passing — including the bizarre decision to take her body back home after she died in an ambulance while en route to the hospital — to the actress’ involvement with the Kennedys.

JFK, of course, would celebrate only one more birthday after being serenaded by Marilyn.

The following year, he was gunned down while waving to supporters in Dallas.

And what does all of this have to do with Kim?

Well, nothing directly — after all, these events took place almost twenty years before she was born.

But given the role that the Kennedy birthday appearance may have played in Monroe’s decline and death, it’s not hard to see why some critics are of the opinion that Kim is guilty of glamorizing a tragic series of events.

Adding to the unusual nature of her homage is the fact that Kim’s mom, Kris Jenner, sported a look that was inspired by JFK’s wife, Jackie.

There’s nothing necessarily wrong with any of this, but many have pointed out that Kim paid tribute to Marilyn Monroe by referencing an event that took place just months before her death.

Monroe remains one of the most famous overdose/suicide victims in history, and we’re living in a time when both phenomena are tragically on the rise.

Perhaps there was no way to acknowledge the suffering that Marilyn endured toward the end of her life without undermining the glamor of the Met Gala.

But many critics would have likely been placated if Kim had somehow acknowledged the fact that it’s those who live the loudest who are often suffering in silence.