Kim Kardashian, 40, and Kanye West, 44, have been photographed sitting next to each other backstage at the rapper’s latest Donda event. The Keeping Up with the Kardashians star took part in the listening event while wearing a wedding gown, and was seen getting cozy with her ex in an August 27 Instagram photo. The snap showed her wearing the Balenciaga haute couture gown with a full veil over her head, as ‘Ye donned an all-black leather outfit with a black face mask and cap.

The post came one day after Kanye took the show to Solider Field in his native Chicago, delivering a spectacle that recreated his childhood home. During the final song, “No Child Left Behind,” Kim showed up outside of his home in a Balenciaga Couture dress. At the time, TMZ reported that Kim and Kanye were “forever family”, and “they have always supported the other’s endeavors and will continue to do that in the future, whether it be a collaborative effort or not.” Their source added, “Kim was happy to do it for Kanye and the event, which was so important to him.”

Meanwhile, another source told HollywoodLife that Kim was “mesmerized” by her ex’s vision. “Kim thought that putting on a wedding gown was fun for the vision that Kanye has for his art and music. She has always been mesmerized with him and his ability to cause discussion, and what better way to get the word out and help him [promote his new album] than by doing this artistic stunt that she more prefers to call a brilliant art idea from Kanye’s mind,” the insider dished. 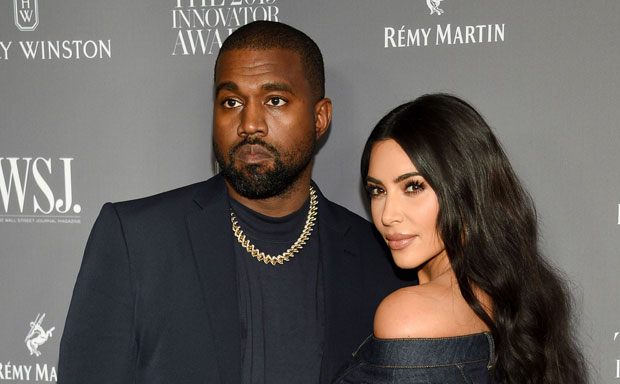 “She supports his artistic endeavors and his career. That will never change. They might not be together romantically, but the support she has for his success — she takes that seriously and it’s important for her. She is happy to do everything to help and she will do it again and again,” our source added. Kanye, who shares kids North, 8, Saint, 5, Chicago, 3, and Psalm, 2, with Kim, also invited DaBaby and Marilyn Manson on stage at the show, resulting in much scrutiny.