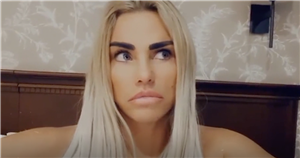 Katie Price wants to see I’m A Celebrity…Get Me Out of Here! star Richard Madeley back on the show.

The 43-year-old – who has been closely watching and reviewing the new series – voiced her confusion as to why Richard, after seeing him back at the Welsh campsite Friday night for an interview with Ant and Dec, can't return to the ITV competition.

Katie gave her opinion on the segment whilst sitting in a hotel room in Cheltenham where she is currently staying with boyfriend Carl Woods as they visit her eldest son Harvey this week.

"Just seen the first half of the show and Richard done [sic] so well with his speech, he couldn't be any more spot on about what it's like behind the scenes," Katie, a former contestant of I’m A Celeb herself, said.

"You think it's a TV show but it does feel real in there, like the challenges, and it's so true. When you do the trials, you don't think of anything but trying to get them stars for the people to eat food.

"And there are no condiments or nothing for you food in there, so I'm glad to see he's happy and well."

Discussing her thoughts on Richard’s abrupt exit from the reality show last week, the former glamour model didn’t understand why, if he was welcomed back to see the show's hosts, he couldn’t simply reunite with his campmates.

"So, because of Covid reasons, they said he couldn't go back in the camp. Then how's he gone back in the camp to do an interview with Ant and Dec, who will be going in the camp when they reveal who's doing the challenges?" Katie said.

"I can't get my head around that either and he didn't have a mask on or anything.”

Richard was forced to leave I’m A Celeb last week after breaking his restricted Covid bubble on the show with a visit to the hospital due to a medical emergency.

His premature departure from the latest series has saddened many viewers along with Katie, who added in her review of Friday’s episode that there "should be a vote to get Richard back in the camp."

The presenter – who was a favourite on the ITV show – has since returned to Good Morning Britain.

The ITV show was cancelled for a third time on Monday night after Storm Arwen caused substantial damage to the Welsh set over the weekend.

However, it will return to screens on Tuesday night after the production team worked round the clock to get the site back up and running.

A statement read: "I'm A Celebrity…Get Me Out Of Here! will return from tomorrow night (Tuesday 30th November) on ITV and ITV Hub with a brand new show. Ant & Dec will be back presenting live from the Castle."

To get the latest showbiz and celebrity news straight to your inbox, sign up to OK!'s daily newsletter.