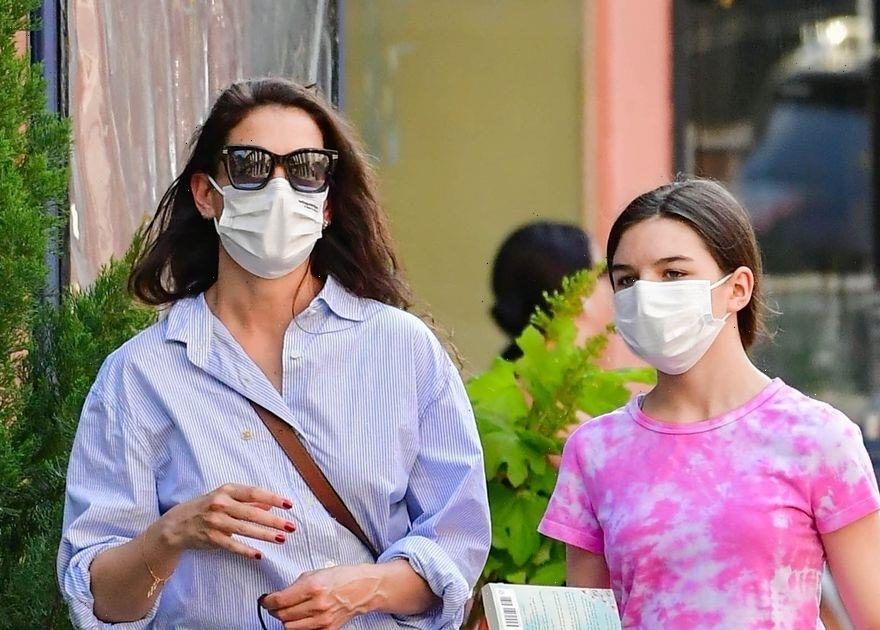 Katie Holmes has been photographed putting on a casual display as she stepped out with her lookalike daughter Suri Cruise.

The 42 year old, who previously turned heads with her outfits at New York fashion week, donned a striped oversized shirt with a pair of loose-fitting straight jeans with frayed hems.

Suri, who looked the spitting image of her mum, teamed the look with a matching blue, green and purple tie-dye jogging bottoms alongside a lilac jumper, which she tied around her waist.

The teen styled her hair back into a ponytail and carried a book as she enjoyed the stroll with her mum.

Dawson's Creek star Katie paired her outfit with some cream-coloured leather loafers and accessorised with a brown purse across her shoulder.

The actress wore a pair of black-rimmed sunglasses and a white face mask to ensure she keeps protected amid the ongoing coronavirus.

The brunette beauty styled her mane straight down for the occasion and Katie stayed close by her 15 year old daughter, who donned a pink tie-dye crop top.

The pair first met in 2005 before making their relationship public by appearing together in Rome in April.

Just three months later they announced their engagement and by October the same year they were expecting their first child together.

The couple married in the 15th-century Odescalchi Castle in Bracciano, Italy, in 2006, which famous faces including Will and Jada Pinkett Smith-attended.

In 2012, however, Katie filed for divorce from Tom as her attorney said: "This is a personal and private matter for Katie and her family. Katie's primary concern remains, as it always has been, her daughter's best interest."

Since then, Katie has had a few high-profile relationships, including her romance with Jamie Foxx.

Most recently she was reported to be dating chef Emilio Ballato, but the pair recently went their separate ways.

"Their relationship fizzled. They figured out they're better off as friends. There's no drama that went down with the breakup and in fact, they're still friends," a source told the MailOnline about the two.

They added: "Katie and Emilio really enjoyed their time together — it just simply didn't work out. She's focusing on being a mom and her upcoming projects."