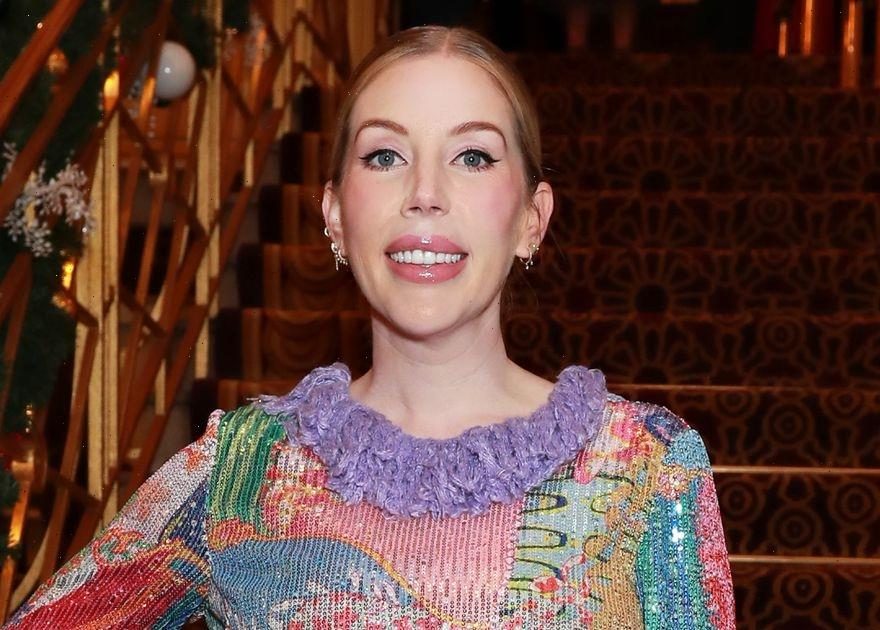 Katherine Ryan showed off her growing baby bump as she joined her teenage daughter Violet for a night at the theatre.

The 39 year old comedienne was positively blooming as she cuddled up to her daughter on the red carpet.

The mum and daughter duo were out for the evening to watch an extra festive performance of Elf the musical in London.

The Netflix star opted for an striking gown, but with candy cane-red stripes and frilly lilac trims, it seemed as though she was trying to embody elf vibes herself.

The patchwork frock was also made out of a shimmery sequinned fabric.

The pregnant mum-of-two chose an elegant toned-down bun that brought all of the attention to her look, and finished off with a dewy makeup look and a slick of pink lipgloss for the occasion.

The youngster then dressed down the fun dress with a pair of white trainers and opted to wear her long blonde locks in a loose casual style.

Katherine gave birth to Violet, whom she shares with an ex-boyfriend, in her mid 20s.

The comic rekindled her high school romance with Bobby Kootstra decades later, and ended up welcoming her second child, a son named Fred, in June 2021.

At the time, the star shared the news in her trademark dry wit, as she admitted she had a "good reason" for her latest podcast being late.

Katherine announced she was pregnant with her third child in July 2022, which this time was revealed on her podcast Katherine Ryan: Telling Everybody Everything.

The Canadian actress told fans her joyful news, but insisted she would keep one part of the journey secret.

"You guys know I'm pregnant, I've been pregnant for a while and here's how I did that," she began. "I got pregnant while breastfeeding the first time I tried.

The star added: "You should never tell people your due date. If you never tell them, they can never start hassling you around that time."

It comes as the star recently spoke about planning to have a "home birth" with her third child, after being in labour for just "nine minutes" with her son Fred.

“We were only at the hospital nine minutes,” she told the host. “So I (think I) might as well have it at home.

“My husband’s not completely on board, he’s a little bit squeamish. I’ve told him, ‘I can talk you through it, it’s going to be fine’.”