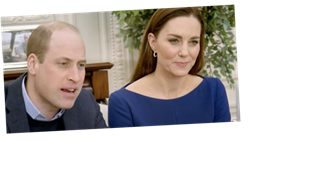 Joining Queen Elizabeth in the commemoration of Commonwealth Day, Kate Middleton shopped her own closet, and repeated a favorite dress for the occasion — an Emilia Wickstead belted sheath in a deep shade of blue.

While she first debuted the dress two years ago to launch the National Emergencies Trust, and again, late last year to mark Baby Loss Awareness Week, her choice to wear it for the Commonwealth's BBC program might be a sign that she's dressed for her future role as the next Queen — according to The Telegraph. In addition to blue being one of her grandmother-in-law's favorite colors, it's also the key color of the Commonwealth flag. "It is a very literal message that Kate is conscious of the Commonwealth's importance to her grandmother-in-law and the role she herself plays now and in the future in fostering the relationship between the 54 member states," the publication points out, adding that the dress's sheath silhouette is the "clothing equivalent of the Queen's 'never complain, never explain' mantra."

For the finishing touches, Kate completed her Commonwealth Day look with a pair of pearl hoop earrings and her trademark blowout.

During her virtual appearance, Kate was joined by her husband, Prince William, and the couple spoke to medical, charity, and volunteer staffers across the Commonwealth about their efforts in response to the coronavirus pandemic.