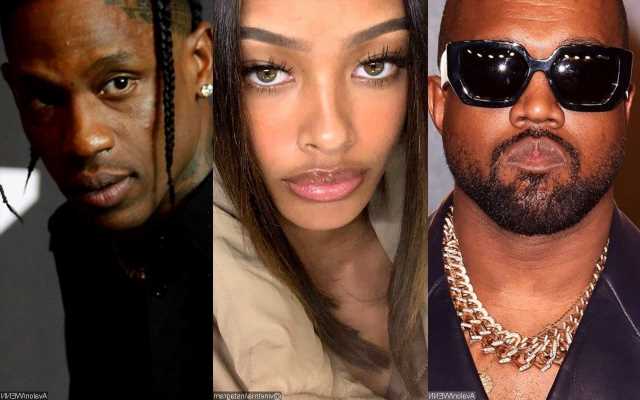 The video has found its way back online amid the 22-year-old model’s alleged budding romance with the Yeezy designer, who is a close friend of the ‘Astroworld’ artist.

AceShowbiz –Kanye West‘s alleged new girlfriend doesn’t seem to be a fan of Travis Scott (II). In a resurfaced interview, model Vinetria didn’t have the nicest things to say about Kanye’s good pal, who is currently facing lawsuits in the wake of Astroworld tragedy.

During an Instagram Q&A back in January 2020, a fan asked the model to name the “worst artists out now.” To the question, the model replied, “Um idk. Travis Scott is annoying.”

The video resurfaced online amid her alleged budding romance with Kanye, who is a close friend of Travis. The two rappers, who have collaborated on several songs over the years, are also basically family as Travis shares 3-year-old daughter Stormi with Kylie Jenner, sister of Kanye’s estranged wife Kim Kardashian.

Romance rumors between Kanye and Vinetria first sparked earlier this month. According to reports, the “Flashing Lights” rhymer has been “hooking up with” the 22-year-old beauty “for a while now.” It was also said that she accompanied the Atlanta native when he recorded his “Drink Champs” interview in Miami.

Additionally, they were spotted together at his Donda Academy’s debut basketball game in Minneapolis over the weekend. In a picture which has circulated online, Vinetria donned in an all-black outfit, while Ye, who sat next to her, opted for a bomber jacket. She also posted on her Instagram Story a video of her rumored boyfriend performing at the event.

Meanwhile, Travis was sued by multiple lawsuits in the aftermath of tragedy at the Astroworld Festival on Friday, November 5. Eight people died and several others were injured at the event following the surge of the crowd. “I’m honestly just devastated,” he said in an Instagram video on Saturday, addressing the tragic incident. “Anytime I could make out, you know, anything that’s going on, you know I stop the show and, you know, help them get the help they need.”