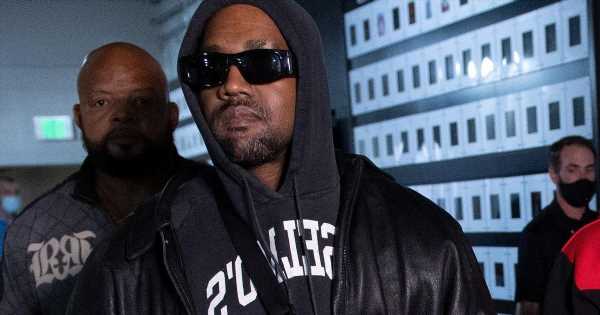 Kayne, 44, and girlfriend Vinetria, 22, had only been dating for a few months and their relationship has ended before it really took off.

Page Six reported on Tuesday that the potential new hottest couple on the scene had ended.

Kayne and his model girlfriend were only reported to have been seeing each other in November, with a source also telling Page Six that they had been 'hooking up for a while' by then.

After legally changing his name, the artist now officially called Ye no longer follows the influencer on Instagram, although she still follows him.

Before their brief romance was reported, he was also linked to another model – Irina Shayk.

That pairing was also short-lived and fizzled out as quickly as it started.

Playing it cool, Vinetria post a series of photos to her Instagram on the evening of Tuesday 21 December implying that she was recently at Ye's Malibu Mansion.

With a simple caption "Just wanted to prove she was at the Malibu mansion" fans have been quick to jump to the conclusion that it is in fact Ye's California mansion.

The Wouldn't Leave singer is true to the song title and reportedly wants ex Kim Kardashian back.

During his interview on 4 November for Drink Champs, the global superstar still referred to Kim as his 'wife' in the present tense and claimed that he wasn't yet divorced.

Kayne was married to the Keeping Up With The Kardashians star for almost seven years, and they have four children together. North, eight, Saint, six, Chicago, three, and Psalm, two.

While performing at a benefit concert for Larry Hoover that he put on to end his long-simmering feud with Drake, during a performance of Runaway, he improvised the "I need you to run right back to me, more specifically Kimberly."

However, the SKIMS company owner has filed court documents to remove her married name.

For more juicy gossip on your favourite stars, sign up to our daily newsletter here