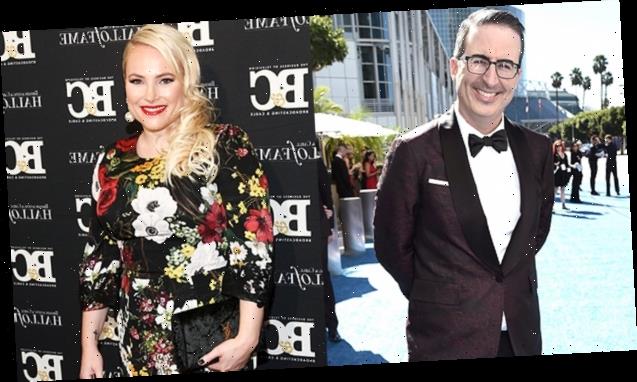 Meghan McCain issued an apology after John Oliver slammed her for tweeting ‘Stop Asian Hate’ while previously saying that calling COVID-19 the ‘China virus’ was okay.

Meghan McCain has apologized after John Oliver called her out for saying she had “no problem” with Donald Trump calling COVID-19 the “China virus”… and then tweeting “Stop Asian Hate” a year later. The View co-host wrote March 22 on Twitter, “I condemn the reprehensible violence and vitriol that has been targeted towards the Asian-American community. There is no doubt Donald Trump’s racist rhetoric fueled many of these attacks and I apologize for any past comments that aided that agenda.”

John dedicated the March 21 episode of Last Week Tonight to examining the anti-Asian hate escalating in the United States amid the mass shooting in Atlanta that left Asian women dead. Meghan tweeted “Stop Asian Hate” on March 17. Yet, nearly a year to the day earlier, she gave Trump a pass for referring to the coronavirus as “the China virus.”

John shared a clip from a March 2020 episode of The View (watch below) in which she says she “has no problem” with Trump’s language. “If the left wants to focus on PC-labeling, this virus is a great way to get Trump reelected. I don’t have a problem with people calling it whatever they want. It is a deadly virus that did originate in Wuhan. I don’t have a problem with it,” Meghan says.

The HBO host launched into a dissection of Meghan’s remarks. “Oh good! Meghan McCain doesn’t have a problem with it,” John said. “Listen not to the scores of Asian Americans telling everyone that the term is dangerous and offensive. Instead, gather around and take the word of a wealthy white woman who’s dressed like she’s about to lay off 47 people over Zoom.

“It’s a fine sentiment to throw up on Twitter after the fact [but] there has to be an understanding that saying, ‘I don’t have a problem with calling it the China virus’ is very much giving space for hate to grow,” he continued. “The minimization of racist rhetoric plays into the harmful stereotype of Asian Americans as a model minority pitting them against other minority groups and pressuring them to swallow their experiences with racism, without making a stink,” he continued. “Because that’s how you earn white acceptance, and that is something that takes its toll.”