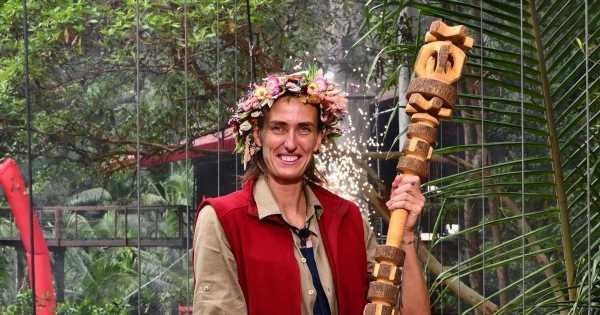 Lioness Jill Scott looked glamorous this week as she made quite the departure from the khaki getup fans became used to seeing on I'm A Celebrity… Get Me Out Of Here!.

The former footballer stepped out in a white denim jumpsuit from Vesper that featured a cut-out neckline, which she paired with a fresh face of makeup and gold geometric earrings.

Jill was joined on the red carpet at the OVO Arena Wembley by a few of her I’m a Celeb co-stars including TV presenter Scarlette Douglas, who donned a sequin minidress that featured numerous colours and impressive fringe detailing.

Scarlette, 35, finished off her look with bold purple lipstick, gold jewellery and a pink satin purse.

Comedian Babatunde Aleshe was also in attendance and looked dashing in a navy blazer and matching trousers, which he wore with a white t-shirt underneath.

He was joined by his wife Leonie, who was dressed in a bright red sleeveless dress as the couple posed for pictures with beaming smiles on their face.

The event, which will be broadcast on ITV on New Year’s Eve, was also attended by stars including singer Katherine Jenkins and Dancing on Ice’s Maura Higgins.

“I'm delighted to be hosting The National Lottery's Big Bash with Alesha. It's going to be an incredible show, bringing the nation together to celebrate the most memorable moments of 2022,” said the show’s host Jason Manford.

“Whether you're lucky enough to get a ticket to see the show at Wembley or watching from your sofa at home, dig out your dancing shoes and join us for a cracking night. It's going to be a big one!”

Britain’s Got Talent judge Alesha Dixon, who was also presenting the show, added: ”It's a night you will not want to miss. Think of it as a huge house party with an amazing line-up and a few hidden extras along the way!”

Jill’s time on I'm a Celeb was largely positive and the nation fell in love with the athlete’s approachable and can-do attitude.

From secretly discovering the World Cup scores to hiding steak underneath her hat, Jill became a clear frontrunner from practically the outset.

Even fellow celebrities were smitten with the Manchester local, as Peter Andre shared his love of the footballer in his OK! column.

He wrote: “I loved watching Jill Scott rapping Mysterious Girl on I’m A Celebrity! She’s obviously one of my favourites now.

“I thought she did great because I can’t even remember the full lyrics to the rap!

“She’s kind of put her foot in it now because when she comes out of the jungle she’s going to have to jump up on stage with me and perform the rap. Instead of Bubbler Ranx, it’s Bubbler Scott!"

He continued: "Even Millie said that someone in school came up to her and said someone on I’m A Celebrity was singing one of her dad’s songs.

“I don’t know if she thinks it cool but it’s definitely very strange for her!”

Upon Jill’s triumphant win, she said: "Oh my God!

"I just can't believe it, honestly, I think I'm going to owe my grandma a lot of money for those 12 million votes. I couldn't have got through it without all the other guys, it was a team effort."