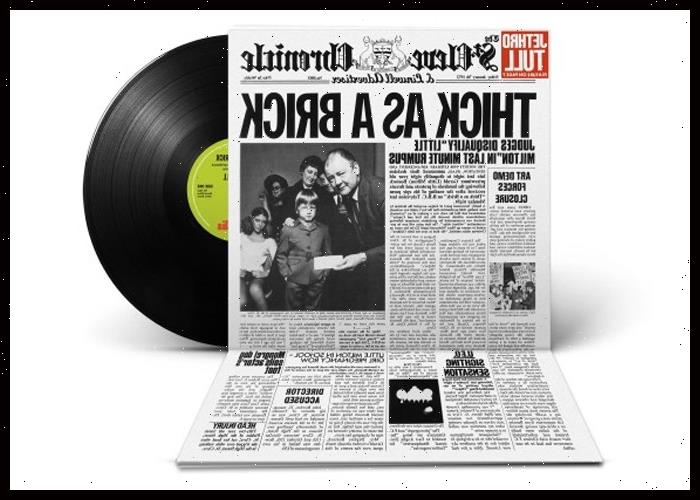 The album has been reproduced in its original format, the legendary 12-page newspaper, along with a vinyl pressed at half-speed featuring Steven Wilson‘s 2012 remix.

After being out of print for nearly ten years, the rare and coveted 40th anniversary CD/DVD special collector’s edition will be released on October 7.

Both are available to pre-order now.

The album has been half-speed mastered from the original tapes, providing the ultimate audio experience of the progressive rock classic.

The CD/DVD contains new stereo and 5.1 mixes by Wilson and the original 1972 recording at Morgan Studios by Robin Black.

The book contains the original newspaper rebuilt for the 12 x 12 format on 16 pages of newspaper-style paper; the 2012 newspaper printed on gloss paper; an article by Classic Rocks‘ Dom Lawson about Thick As A Brick; an Ian Anderson interview by The Reverend George Pitcher; many rare 1972/1973 photos and 2012 tour photos; memories of the recording from engineer Robin Black; recording and touring memories from Martin Barre, Ian Anderson and Jeffrey Hammond; and a Q&A with tour manager Eric Brooks with tour memorabilia and the full 1972 itinerary.

In 1972, Jethro Tull released the instant classic, Thick As A Brick. 50 years later and the album is still revered as one of rock’s and progressive rock’s most definitive and pioneering albums. Unlike any other records on the market, the album is set inside a broadsheet newspaper, “The St. Cleve Chronicle & Linwell Advertiser”.

Thick As A Brick was the first album to feature drummer Barrie Barlow, alongside Ian Anderson, Martin Barre, John Evan and Jeffrey Hammond.