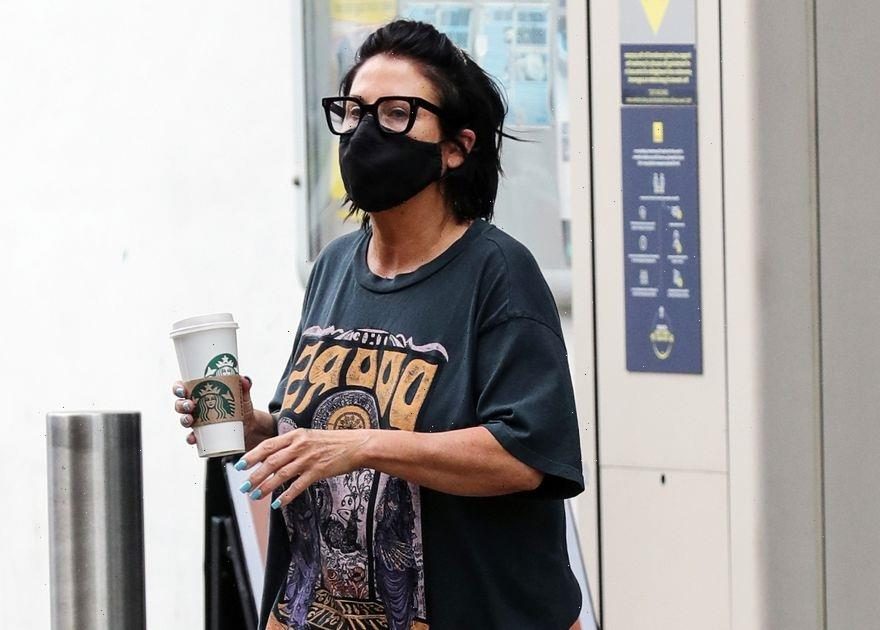 Jessie Wallace has been photographed putting on a casual display on Thursday 8 July as she stepped out to buy a takeaway coffee from Starbucks.

The 49 year old, who recently showed off her massive back tattoo in a black summer dress, was spotted heading out of the chain store in Borehamwood wearing a baggy The Doors T-shirt and a pair of black shorts.

The EastEnders star, who is well known for portraying Kat Slater on the popular BBC soap opera, teamed the outfit with some white fluffy slippers.

Styling her raven hair back to keep strands out of her eyes, the TV personality donned a black face mask and some black-rimmed prescription glasses for the outing.

She later flashed a smile and waved at the photographer before heading off for a busy day of filming.

It comes after Jessie recently raised eyebrows with a raunchy comment on her EastEnders co-star Max Bowden’s photo.

The TV personality shared the cheeky words, which appeared to be an inside joke, in the comments section of one of Max’s snaps on Instagram.

Max, 26, had shared a throwback image of himself at the National Television Awards in 2019.

The actor, who plays Ben Mitchell in the BBC programme, looked dapper in a checked blazer along with a beige waistcoat and trousers, a white shirt and brown tie in the image.

As he shared the picture with his 185,000 Instagram followers, he shared his surprise at how much time had passed since the glitzy event.

Max, who recently reportedly split from his girlfriend Danielle McCarney after two years, wrote: “Been a lifetime since this photo,” followed by three grinning emojis along with the hashtag #ntas.

It was in the comments section that 49 year old Jessie shared the raunchy cryptic message.

The soap star said: “Remember… if you need a m***e to cry on…. I’m yer gal,” followed by a winking face emoji.

Fans shared their reaction in reply to Jessie’s comment as one amused fan said: “@jessie.wallace_official haha such a supportive m***e [laughing emoji] we all definitely need one of those”.