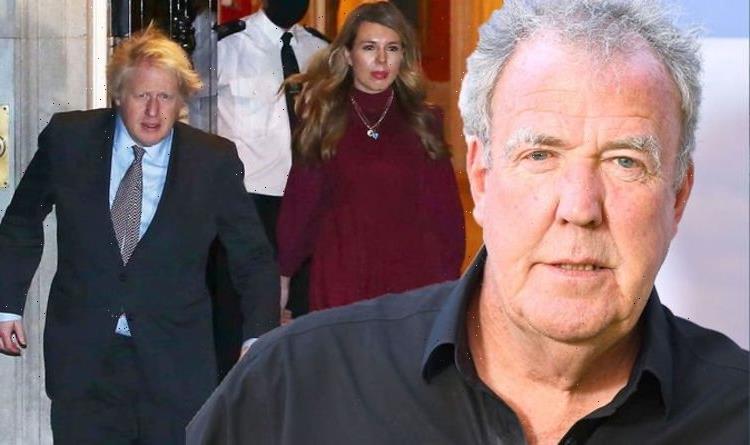 Jeremy Clarkson, 61, has lashed out at Boris Johnson and his wife, Carrie Johnson. In a scathing column, the Who Wants To Be A Millionaire? host criticised the couple for “turning their eco-guns” on farmers.

Carrie Johnson and her bouncing Boris mouthpiece are about to turn their eco-guns on farming.

The piece was entitled: “Jeremy Clarkson has some climate suggestions for Boris Johnson.”

He prefaced by expressing concern for the lack of carbon dioxide, which is needed for purposes such as freezing food in supermarkets and “stunning animals before they are executed”.

The presenter went on to criticise other parts of Johnson’s climate policies, before launching a verbal attack on the couple.

He said: “I’m afraid it’s going to get much, much worse because Carrie Johnson and her bouncing Boris mouthpiece are about to turn their eco-guns on farming.”

Clarkson claimed that they have decided that farmers are “ruddy-faced planet-killers”.

He states that the two believe that, as farmers produce 10 per cent of the UK’S greenhouse gases, they should be “ethnically cleansed from the countryside”.

“Then it could all be sold to Russian oligarchs, who’ll plant a billion conifers, and eco-lunatics, who’ll fill the resultant monoculture with wolves and bears,” he added.

He continued by expressing sarcastically that, regardless of plans for climate change, there are bigger issues at hand.

He commented: “Couple this to the ban on internal combustion and the exciting plans to make everyone heat their homes using soil and, yes, it’s possible that Britain will be carbon neutral, as promised, by 2050.

“Lovely. But where will our food come from?”

Jeremy didn’t stop his criticism of Carrie just yet, however.

He stated that Britain’s number one priority should be self-sufficiency, which is currently at 60 per cent.

He lamented that the Government will continue to decrease this figure because food production technology will produce more global warming.

“So, right, we buy our food from abroad. Which means we’ve simply exported the global warming problem to another country.

“That’s the nuisance fact about climate change that I don’t think Carrie has grasped.”

This is not the first time that Jeremy has launched a scathing critique of public figures.

His most recent victim was F1 driver, Lewis Hamilton.

He wrote of Lewis in a column published on Monday, saying that he had “changed”.

The broadcaster said he was now “more woke and politically correct than a student AGM.”