Before there was Marc Anthony and Alex Rodriguez, and Jennifer Garner and Ana de Armas, there was Jennifer Lopez and Ben Affleck.

Bennifer was the It couple of the early aughts. Though the two ultimately went their separate ways in 2004, a recent vacation to Montana might indicate the resurrection of one of Hollywood’s favorite romances.

Ahead, we take a stroll down memory lane and track Ben and Jen’s relationship history, from how they met to the stunning pink diamond that Affleck proposed with and beyond.

The then rising Hollywood actors first met on the set of Gigli, a rom-com that released in 2003. The movie ultimately flopped, but sparks flew between the leading costars.

At the time, J.Lo was still married to her second husband, dancer Cris Judd; she and Affleck went public with their relationship soon after her divorce from Judd. (Their divorce was finalized in 2003.)

In 2016, the actress reflected on the beginning of their relationship in an interview with People. “We didn’t try to have a public relationship,” she said. “We just happened to be together at the birth of the tabloids, and it was like ‘Oh my God.’ It was just a lot of pressure.”

She also revealed her first impression of Affleck. “I felt like … ‘Okay, this is it,'” she said. “[But] sometimes I feel like what you think people are and how you see them when you love them is different than when they reveal later.”

The now iconic music video features a steamy moment from Bennifer. With J.Lo in a hot-pink bikini and Affleck in a white tank, the lovebirds sunbathe on a boat while the Good Will Hunting actor lovingly displays some PDA with J.Lo’s bottom. The video also had a tongue-in-cheek reference to the tabloids’ obsession with their relationship, including surveillance camera footage and pap photos of the two.

In 2010, J.Lo spoke of the pressures that the media put on their relationship during a guest appearance on The Graham Norton Show. “I love Ben, he’s a great guy, but it was a lot for both of us to be under that type of siege for two years straight,” she said. “We were on the cover of every magazine, every week, it was just a weird thing. … Our relationship, I think, did suffer because of that. That’s not the only reason … but I think it definitely played a part in the dynamic of our relationship.”

J.Lo confirmed the happy news in an interview with Diane Sawyer. “It’s the most magnificent thing I’ve ever seen,” she said of the 6.1-carat pink diamond from Harry Winston that Affleck gave her. The rock reportedly cost Affleck $2.5 million. 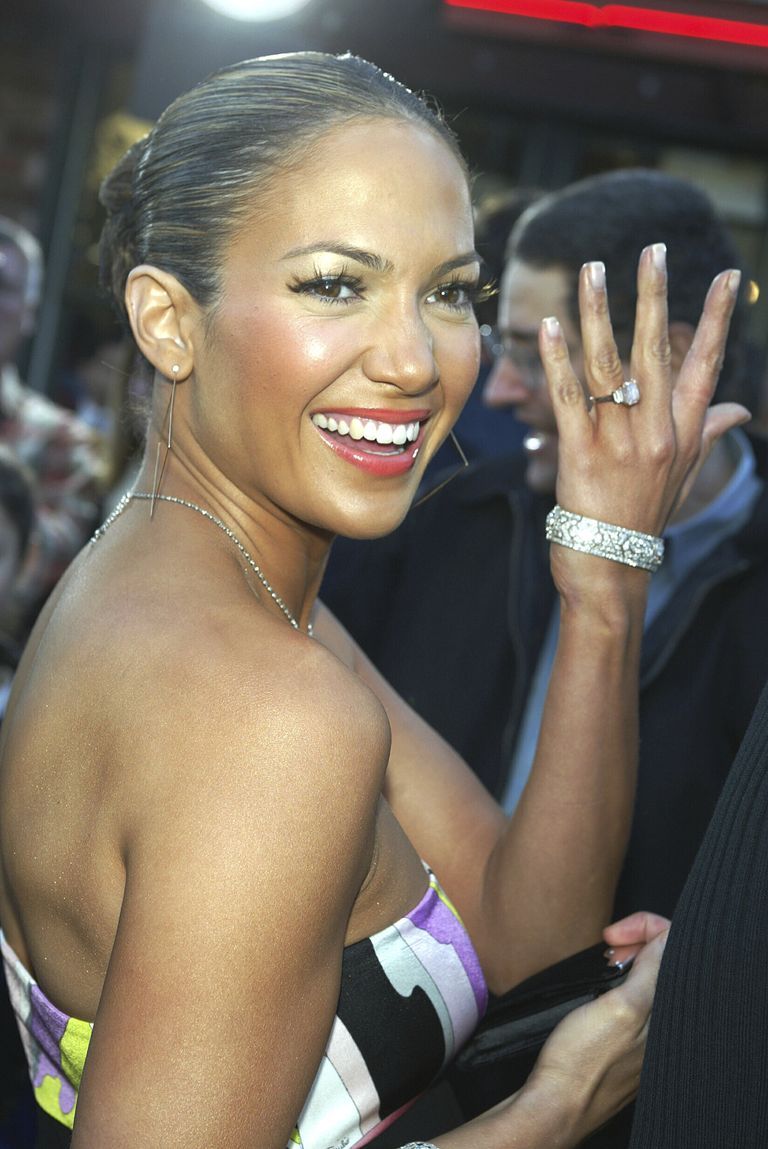 2003: They star in another movie together.

J.Lo played the dead wife of Affleck’s character in Jersey Girl, a dramedy that was slated for a 2003 release, but got pushed to the following year. Also starring Liv Tyler, the film ultimately underperformed at the box office, grossing only $36 million.

September 2003: They postpone their wedding.

Days before the two were set to officially tie the knot, they released a joint statement announcing the ceremony’s postponement.

On January 22, 2004, the two ended their engagement. J.Lo confirmed the sad news through her spokesperson.

“I am confirming the report that Jennifer Lopez has ended her engagement to Ben Affleck,” the statement said at the time, per MTV. “At this difficult time, we ask that you respect her privacy.”

In June of 2004, the “Let’s Get Loud” singer married singer-songwriter and longtime friend Marc Anthony. The two welcomed twins, daughter Emme Muñiz and son Max Muñiz, in 2008. They separated in 2014.

In her 2014 book, True Love, J.Lo reflected on the turbulent period between announcing her split from Affleck and marrying Anthony. “Ben and I split up at the moment when I thought we were committing to each other forever, it was my first real heartbreak, it felt like my heart had been torn out of my chest,” she wrote, per Page Six. “I sought out comfort in another person, tried to find someone who could make me feel loved and wanted in my loneliest hour. … Marc came back into my life three days after I should have been at the altar saying ‘I do’ to another man.” 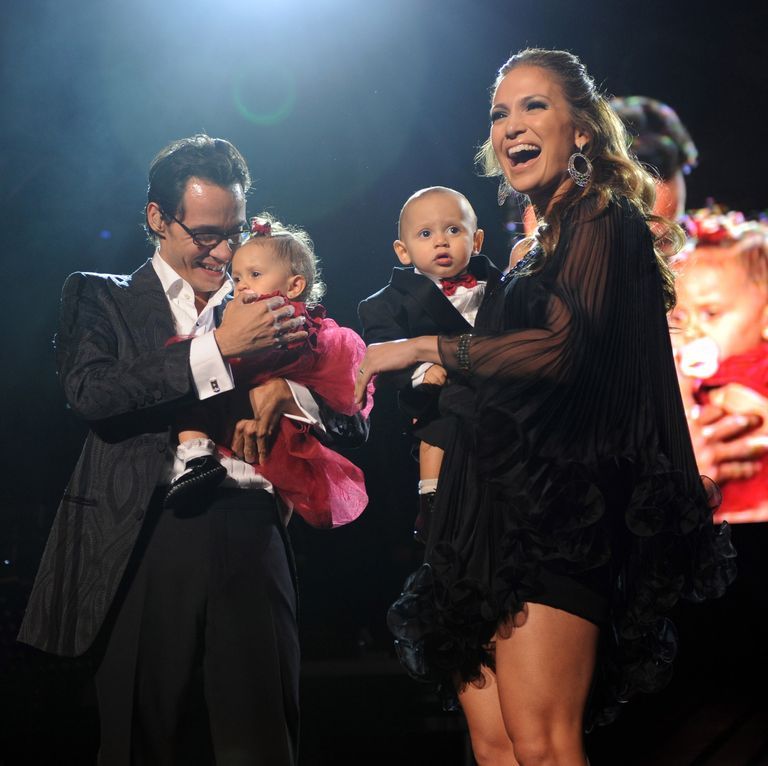 She added that their romance may have been her attempt at a quick fix for her heartbreak. “Thinking back, maybe deep down I knew that this was a Band-Aid on the cut, that my wound hadn’t been stitched or healed,” she wrote. “But I pushed all that to the back of my mind. Because life takes unpredictable twists and turns, right? And you’ve just got to go with what you feel is best in the moment.”

Affleck, too, soon moved on. He married Garner in 2005, and the new Hollywood couple welcomed three children together over the years: daughters Violet and Seraphina Affleck, and son Samuel Affleck. The couple divorced in 2018. 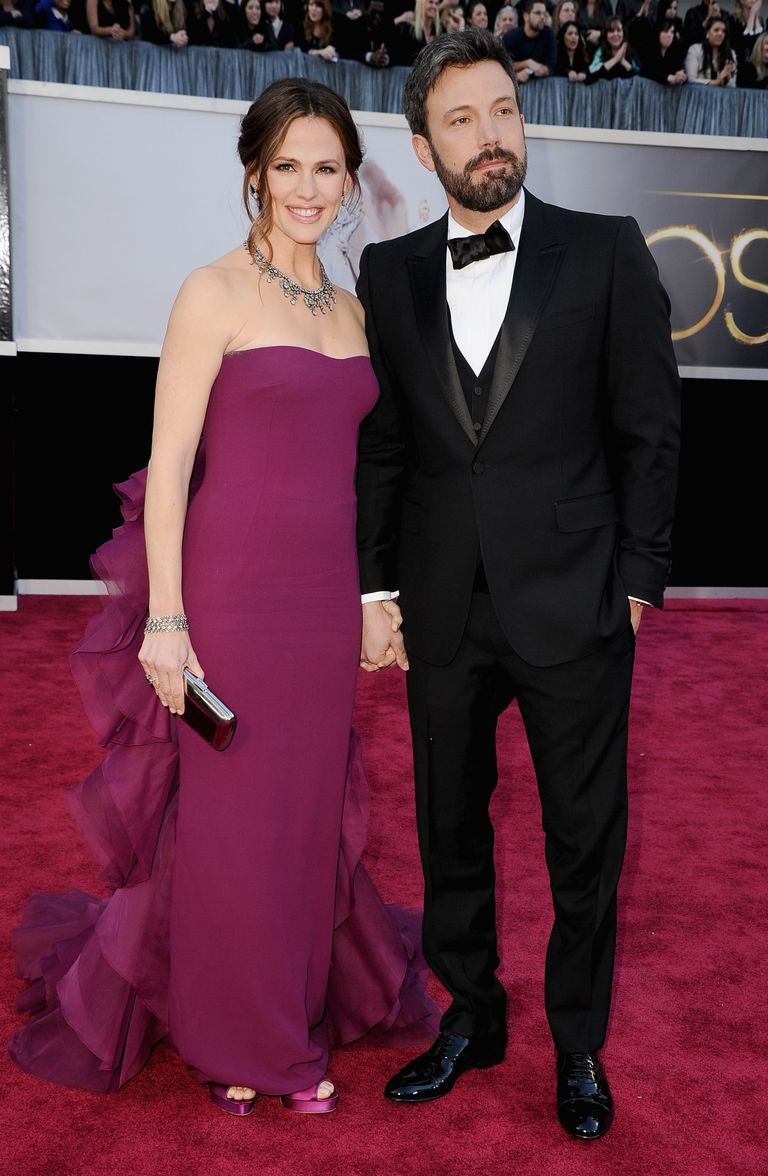 After J.Lo ended her engagement to Alex Rodriguez and Affleck split from Ana de Armas, the two were spotted hanging out again. Page Six reported on April 30 that the actor was photographed visiting her Los Angeles home multiple times.

“Security picks him up at a nearby location and drops him off after spending a few hours at her house,” said a source, who insisted on the platonic nature of Affleck’s visits. “They are friends,” the insider continued, “they’ve never not been.”

Nearly two decades after they called it quits, Lopez and Affleck departed on a weeklong vacation to Montana following their appearances at Global Citizen’s Vax Live benefit concert, per People.

“[Jennifer] spent several days with Ben out of town,” a source said. “They have a strong connection. It’s all been quick and intense, but Jennifer is happy.”

Another insider confirmed the getaway to E! News.

“They have been in touch here and there throughout the years,” a source close to the singer told E! “Ben reached out to her to see how she was doing and they had dinner together a few times within this last month. It’s natural between them and the chemistry is unreal. They picked up where they last left off and are enjoying each other’s company right now.”